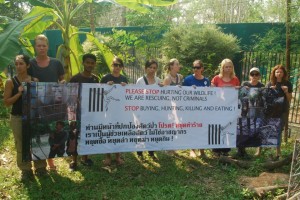 In the summer of 2005, I left Europe for the very first time, a backpack strapped to my back and in the company of my best friend, and more recently best man, Dickon. Our aim was to get in a bit of travel before we headed out into the ‘real world’, which is exactly what Dickon did (the man’s been quite ludicrously successful since), but it’s fair to say the experience changed both of our lives. He’ll marry a girl he met there in the coming months. For me, the trip was the inspiration that put into place a lifestyle that eventually took over for a few years – intense travel and work abroad – and in some ways laid the seeds for a writing career, too. If I hadn’t gone to Thailand, I’m also certain that the series of events that led to me meeting my wife Helena wouldn’t have happened. We spent nearly five weeks of that summer in one place, a wildlife park in the heart of the Thai jungle called Wildlife Friends Foundation Thailand, a charitable animal rescue oragnisation which you can read more about here. If you need a little cheesy personal stuff, here’s us there: 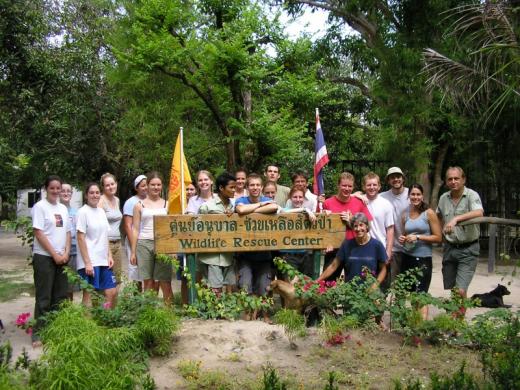 You might wonder why I’m bringing this up now. It’s not sentimental, and you can’t even go back and read what I made of it at the time (I just haven’t had the time to update the blogs on this website anything like far enough back – they don’t even cover my 18 months in Seoul just yet). The reason is,  sadly, things have got a bit hairy over there since. There’s not a great deal we can do from here aside from raising awareness or helping out financially, as the recent raids on WFFT have been entirely orchestrated (directly or regionally) by the Thai government, who claim that the Dutchman who runs it, Edwin Weik, is keeping an illegal zoo. Having worked there I can ensure people that this place is not a zoo, and is run for the benefit of the animals far above anything else. They don’t charge to enter, for a start, and the animals are cared for in as independent a way as they can manage. Things are run almost entirely by volunteers, and any animal that can be is released back into the wild is. All the animals are taken from awful owners who keep them in appalling conditions, and are certainly better for being in the centre, not their previous homes. The only time animals are taken from the wild is when they’ll die otherwise, and even that’s unusual (a unique case, for example, was the centre’s recent rescue of dozens of stray dogs from floods in the city of Ayutthaya).

What’s most bizarre about the entire episode is that the confiscation of animals in raids has been done despite everything in the centre being within Thai law, and done with an unfathomable agenda. If you want proof of this, some of the more than 100 animals that were claimed by the Department of National Parks have now been given back, after they allowed more than a few hours to produce the paperwork that proves ownership, and more are expected. They haven’t returned anywhere near enough yet, which is worrying in itself given the treatment, but possibly more so is the way in which the animals were treated when they were captured. The below video is more than a little disturbing, but captures just a little of what went on, including the near drowning of a monkey for absolutely no reason. Appalling. I hope I can do just a little to raise awareness, and with a little luck, plenty more down the line. I certainly hope to be able to do more to help Edwin and the team further in the future, when finances allow. In the mean time, the more people know about this, the better. The footage of the raids themselves start at around 1’20: