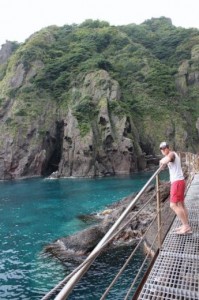 Our third –and final – day on Ulleungdo was the only day on which we didn’t have a wide selection of pre planned tour activities to take advantage of. Our small group seemed to have gained a plethora of nasty afflictions by this point. My limp inducing sea urchin wound – only millimeters short of a new style of piercing – was joined by Andrew’s severe back ache (that’ll teach him to sleep on concrete roofs!), Ashley’s near heart palpitations from laughing too much, and a selection of hangovers of various severity.

There was only one thing for it: hit the sea.  Having seen the drop offs just offshore on our swimming expeditions on the first day, the clear water around the island had been calling ever since. We managed to acquire some goggles and threw ourselves from yet another bridge walkway into what seemed like an abyss, at least until you slipped the goggles on. Colin and I spent a happy morning diving through shoals of stripy minnows and taking close up looks at the various spiky sea life adorning the cliff walls. It’s been a long time since I’ve spent so long swimming in one day!

Of course – being the third day and having had our meals pretty much provided for us until this point – the local specialty was also calling. Mauntang (literally translated as spicy soup) and Hwei (Korean Sushi) made a great lunch, though Mauntang is one of those excessively spicy meals that you feel equally strongly going in and out of the system! The soup takes a bit of getting use to, as the whole fish goes in and looking at the eyes while you eat is a slightly uncomfortable experience. A mild option, however, compared to the other local Sushi (which we certainly didn’t try!), which is served by picking the meat from a live fish. Rumour has it you can still see the heart beating – not my idea of a good relaxed dinner!

The journey back to Seoul was a predictably long nightmare. Even Seoul at Chuseok – a relatively slow and relaxed place compared to the ‘hurry hurry’ year round carnage – feels so full of hassle and lacking in beauty right now.  Ulleungdo takes the breath away, but it’s extremely hard to come back from.