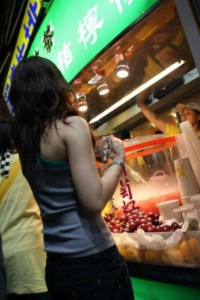 Experience tells me that Asian night markets are usually something very special. People know how to spend their evenings over here: there’s no sitting at home in front of the TV, no slow meals or lazy Internet surfing. Instead people gather in bustling neighborhoods, wander around districts glowing with neon and feast on a huge variety of cheaply priced street food.

Shillin Market in Taipei is no different. Located in a shabby area of winding back streets, the market’s so packed on a Saturday night that you have to duck into a quiet corner every so often to pause for breath. As the sun falls beneath the horizon, the pollution stained apartment blocks around the neighborhood seem to morph into glowing neon beauties, the stains and shambolic layout somehow hidden behind the colorful glow.

Shillin is often surreal. A restaurant named ‘modern toilet’ sits near the markets entrance, selling unnecessarily shaped food in white ceramic dishes, and using a selection of (fortunately pedestal style) toilets as an alternative to more conventional seating. Out on the stalls, the usual selection of fried insects seems to have been replaced with the occasional grilled snake, killed and skinned in front of the customer, with a cocktail made from the blood available as an optional extra. Ongoing lottery games dominate one corner of the market, with locals clutching greasy tickets screaming at TVs and sipping on beers, gambling the night away.

It’s hard to feel alone in the thick of all the action. As I drift around locals test out their English discussing the weather in the dumpling queue (very, very hot, but that seems to be how they like it). Teenagers hand over their last credit on computer games, urging you to ‘try new thing’ – you promptly lose. Even in the thick of the action, old men make way for the unaccustomed foreigner, simultaneously passing over the their last betel nut through the ever-moving crowd. 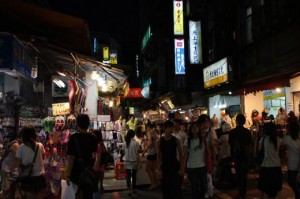 I could spend forever in places like Shillin. Wandering around slurping on cheap cups of freshly squeezed Cranberry juice and munching on meat filled dumplings just doesn’t get old, especially when being sucked into the thick of the crowd is such a pleasant experience. This is two-day Taipei, however, time is limited, and chewing on that betel nut has made the need to track down a bathroom more urgent. It’s time to move on.

Taipei is a common trip for expats in Seoul, and many people have come back and told me not to expect much from the nightlife. I can kind of see where they’re coming from, but then again, limiting your definition of nightlife to packed nightclubs is playing a part too. The markets are certainly the highlight, and are more lively and enjoyable than pretty much any nightclub I’ve ever set foot in, but I do have a ‘Taipei nightlife’ article to complete, so the hunt for some late night entertainment is on.

I start my search in the Daan district, where I stumble across a selection of sports bars and eventually manage to scope out directions to the crown duel I’m hunting for: Taiwanese ‘fight club’.  This trance club features a regular fight night, in which brace revelers don gloves and bash each other into corners in the name of entertainment. It’s been a long day, so I catch a quick scrap between two wasted looking businessmen, which ends with both on the floor, though I think that has more to do with alcohol than any of the punches being thrown. It may not be quite what I’d been hoping for, but it’s more than enough to make an article out of.

The prospect of being challenged to a dual by a punch-drunk local is pushing me back to the hotel. Taiwanese nightlife is, perhaps, not quite the crazy all night parties I’ve come to expect throughout Asia, but it’s certainly unique.