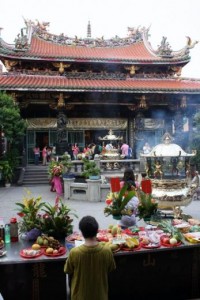 Stepping off the plane onto the parched tarmac of Chang Tai Sheik international airport, I watched the electronic thermometer flick over from 34.5 to 35 degrees and felt the first bead of sweat roll down my back. I didn’t know what to expect from Taipei, but it certainly wasn’t this. The ‘friendly face of China’ (Taiwan still issues it’s visas under the name ‘Republic of China’ or ROC) makes a feature of palm trees, great arching roofs and an extremely laid back lifestyle. A prominent city centre signs features the words ‘Taiwan, not Thailand’. On face value, you’d be hard pressed to tell the difference.

A swift bus ride into the city and a modest hotel check-in later, and only two hours after landing I’m out and about on Taipei’s efficient subway system, eyeing my guide book like a true tourist. For my first destination I settle on the well-hyped Longshan Temple, a multidenominational city centre beauty with a wonderful vibe. Even the temple courtyard is enough to make you stop and stare. Just inside a small iron gate off a busy public park a series of waterfalls flow into a poi-filled rock pool, and a wide-open courtyard leads to a dramatic temple entrance. Carved snakes rotate around dark stone columns, red dragon topped roofs support huge Chinese lanterns and a haze of incense smoke fills the air.

Evidently, in Taipei religion is still very much part of everyday life. The people roaming around inside are as likely to be clad in the latest designer labels as the abundant uniforms of the various religions. Statues representing the multiple Gods of this wonderfully inclusive sight line the outer walls, gem encrusted and candle lit. In the centre worshippers clutch whole packs of flaming incense, place offerings in the form of food and flowers on courtyard tables and meditate quietly in front of ancient scripture books. 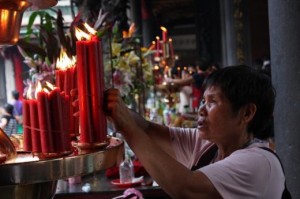 Of all the Asian temples I’ve experienced over the past couple of years, Longshan has to be one of the most impressive. The welcoming attitude and lively interaction give the place energy, the incessant drift of incense smoke rising from elaborate cauldrons adds a dreamy air. I relax for several hours amongst the locals, thinking on the ‘divination’ the temple has given me (short but sweet – ‘Everything is fine and full of friendship’. Despite knowing no one in this city, I have found Taipei to be inherently extremely friendly). Only a few hours down, and Taipei has very much got my attention, but it’s time to move on.

I decide to do the big one. I mean that in the very literal sense: Taipei is home to the world’s tallest building, Taipei 101, or at least until a current construction project in Dubai is finished. Somehow I manage not to site the huge skyscraper until I step off the shuttle bus right underneath it. The segmented bamboo design stretches so far into the sky it’s hard to see where it ends: 101 floors and 508 metres straight into the blue. 101 holds a whole host of world records now – height, fastest elevator (a whopping 1010 metres/ minute) and biggest wind damper to name just a few – but the most impressive is the almost complete absence of large surrounding buildings.  101 seems to stand alone in the centre of Taipei, dominating the skyline whenever there’s the slightest break in the winding alley ways. 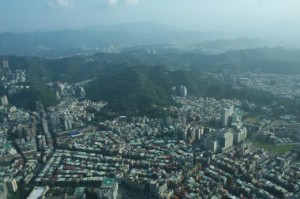 The observation deck –which costs a slightly irritating $30 just for the elevator ride and view – is on the 89th floor, and offers views as far as the national parks surrounding Taipei city. Whilst I’d feel uncomfortable hovering over the window of a 30th storey, the 89th floor is just so high up that the scenery below seems almost unrealistic. Entire office blocks can be hidden behind a thumb on the end of an outstretched arm, and the cities yellow taxis look like crawling insects. As safe as it felt, I wouldn’t like to be hovering near the top during one of Taipei’s frequent typhoons!

I had to walk a full four blocks from 101 before my 18mm wide angle lens could even fit the entire building in, which gives an idea of the sheer scale. As I watched the sun cast an increasingly huge shadow behind the massive skyscraper, I tried to think of two more impressive sites I’ve seen in the course of a day, and failed miserably. Taipei 1, two years of Asian travel 0. Time to check out the nightlife! 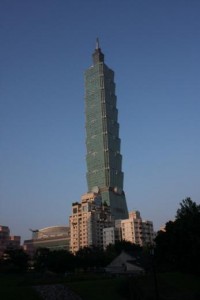