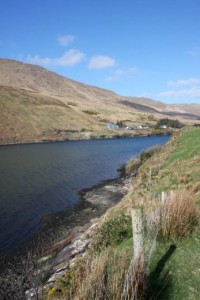 I officially love hiring cars for the weekend. After years of very irregular driving, it’s probably fair to say I’m a worse driver than your average short sited 80 year old, but it’s just a great way to see a country with complete freedom. This time we got ourselves a tiny Hyundai i10 (it’s amazing how places seem to follow you around somehow: Korea seems to crop up all over the place these days, the little Hyundai is just one of dozens of random Korean things to turn up in my life recently) and headed west.

Mayo (sorry, there’s no way I’m repeating the Gaelic spelling throughout this post, it’s too late in the evening!) is Helena’s home county, and the fact that I’ve never seen more than a brief glimpse of it and that a trip would include the chance to see her sister’s new baby was more than enough reason to head down for the weekend. We started off in Westport, mainly as I had managed to take a wrong turn heading west and it ended up directly in our path. It’s a pretty little down, extremely hilly, and with the feel of somewhere that’s a little lost in time – I can easily imagine the streets, cars aside, haven’t changed in years. We stayed long enough to pick up a picnic, and hit the road south.

Mayo countryside is truly stunning. Most of it is totally unspoilt, and the areas that have been turned into farmland still have stone walls dividing up the tiniest little films, far more attractive than the endless rows of crops we have back home, though no doubt far less practical too. The landscape is very hilly, and littered with rustic lakes. Very similar, in fact, to the Lake District, though the plants had more in common with Dartmoor. It was breathtaking and instantly loveable. 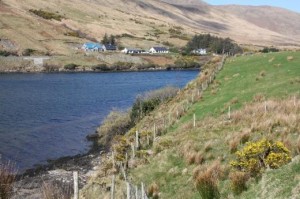 We stopped off next to a little steam to eat our picnic, and splashed around a little on the stepping-stones. One of the most overwhelming things about Mayo is the silence. Apart from a car drifting past every five minutes, all you can hear is the wind.

Next stop was Leenane, a village on the side of a huge inland saltwater lake, with views for miles from the mountainous lakeside. Again, extremely beautiful, the scenery made concentrating on the driving incredibly difficult. The roads were so empty that providing you kept away from the sides you could get away with a certain amount of scenic gazing. Cong – which I’ve waxed lyrical about before – was just a brief drive-through on the way back, but it’s so picturesque it still deserves a mention.

We arrived at Helena’s sisters in Ballinrobe just in time to meet the baby before watching the Ireland vs. Wales grand slam decider. The baby’s six days old now, and makes the most incredibly cute noises. She’s very pretty (I’m not one to splash a baby’s details or pictures all over the internet, so forgive the lack of specifics….). Watching the Ireland game was a rollercoaster experience, and I must admit to a certain sense of relief when Stephen Jones’ kick fell short. The Welsh have looked threateningly dominant in recent seasons, so great for the competition to see them stuck down in fourth. 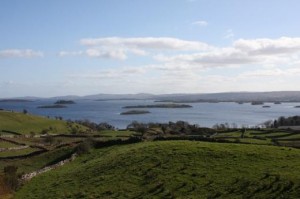 Sunday was Mother’s Day, and aside from sleeping in and worrying about trying to get in touch with my mum, I spent most of the day eating, sleeping late or driving back to Dublin.

State – Ireland’s second biggest music magazine and my newest writing employer – lined me up a gig review for Sunday night, so I headed off to Whelan’s as soon as I got back to see Midori Hirano, a German based Japanese musician. She turned out to be the perfect finish to such a chilled out weekend: a chilled out, almost totally instrumental keyboard player who barely acknowledge the audience for her entire show, yet managed to be totally entrancing despite it. I would have loved to have got hold of a CD before heading down to Mayo, as her music would have provided the perfect soundtrack to the scenery.

The perfect end to a great weekend. Shame we missed the Irish rugby teams homecoming parade, that would have been quite a party! 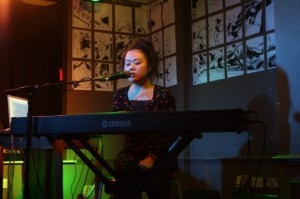