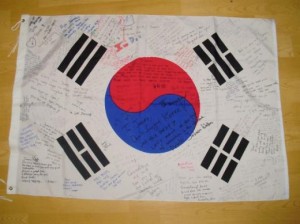 Memories, unfortunately, fade and twist reality to something different to what it really was. I want to remember. I want to be able to look back and picture exactly what it was really like. I can’t rely on my memory for that, but I can rely on my blog. I’ve been gone a day, here’s what I think I’ll really miss about Seoul:

1. The People – An easy number one. Koreans have to be amongst the friendliest people ever once you get to know them. I have some friends who it breaks my heart to leave behind, Korean and foreign, and I hope we’ll always stay in touch. The likely return next summer appeals as much for seeing all the people I’ve left behind as for finishing off the guidebook I’ve been working on. I couldn’t have asked for a better group of people around me for the past 18 months. I hope Ireland is this good to me.

2. Korean Food – Forget dog and Kimchi, Korean food is about so much more. In fact dog is really quite an effort to track down, I should know, I made a point of sampling dog soup before I left. Korean food is healthy, cheap (so cheap that I’ve barely cooked for the past 18 months, just gone to restaurants), and tastes great. As odd as it probably sounds to those back in the UK, it gets me down that I don’t know when I’ll next eat rice cake soup (덖 만두국 ) or spicy chicken BBQ (닭갈비 ) . One of my first tasks in Dublin has to be to find a Korean restaurant and impress them with my limited but functional Korean. Maybe they’ll give me extra side dishes….

3. Public Transport – Britain take note. Buses across the country for $20, regular, reliable, quick. It doesn’t have to cost a fortune to have public transport that’s really worth using. I look at the train prices back home and feel like staying at home. In Korea I feel like spending every weekend away, especially when combined with the cheap hotel prices. Check out the Korean part of my world map to see how much I loved this! To top it all off, even taxis are affordable in Korea. No worries about staying out to late to get home, a fiver in a taxi and you’re there anyway. Perfect.

4. Nightlife – 6am Close. Enough said. Asia’s nightlife will forever kick the rear end of anything in Western Europe on this fact alone. Throw in cheap alcohol, affordable clubs and a collective compulsion to party until they drop, and Korea’s nightlife so surpasses anything I’ve come across in Europe it’s not even a worthy comparison. Hongdae rules!

5. Korean Rock – I have no idea how a relatively conservative country produces such great rock bands. Maybe it’s a form of rebellion against that conservatism, who knows. But Galaxy Express, Phone Booth, Nel, No Brain, Crying Nut, Rocktigers, Moonshiners, even Big Bang… you’re in my iTunes for good. And that’s without even starting on the quality of expat bands in Seoul (the Bellows, We Need Surgery… untouchable!).

6. Commitment and Enthusiasm – If Korean’s do anything they do it properly. From learning English (taken extremely seriously) to drinking until they can’t force anymore down, nothing is done in half measures at all. If everyone took their work and life so seriously, maybe the whole world would achieve Korea’s economic success over the past few decades, and we wouldn’t be in the fix we’re in now. You never know!

7. ‘Bang’s’ – No not that you dirty minded… Bang is Korean for room, and the various ‘bang’ facilities are fantastic. Why this kind of thing hasn’t been adopted in the UK just yet really is beyond me. Noraebang (singing room, Korean style Karaoke) is a feature of Korean nightlife, and really couldn’t be much more entertaining if it tried. Jimjilbang is a common form of Korean spa that costs about $10 and makes you feel new and fresh in the most impressive selection of baths and saunas imaginable in a small city centre building. PC Bangs offer insanely high speed internet access for half a buck an hour, and DVD Bangs give a personal cinema experience on a huge screen for less than the cost of going to the cinema itself (though couples often use them for totally different purposes… ). All are ludicrously cheap, great ways to pass the time, and would go down a storm if anyone ever marketed them back in the UK. I’ll miss it loads.

8. Writing Opportunities – Ok, so this one is very personal, but the number of opportunities I’ve been offered in Korea to turn a hobby into something almost approaching a career has been unbelievable. From never having has anything published to getting a book deal, working with a Lonely Planet and writing for a national magazine in the space of a year – I can’t really argue with that! I’d like to pretend it’s all talent, but in reality Korea offers you so many more chances then I’d ever be given back home, it’s all come to me relatively easy. I hope things work out as well in the future, but I’d be insane to think it’s going to be anything like as easy as it has been so far.  I’m sure those interviews with Pendulum and My Chemical Romance won’t do any harm, though!

9. Berlitz Students – I’d be lying through my teeth if I said Berlitz was all fun and games, but the students are exceptional. Yes there is the odd dull businessmen, but the opportunity to teach major companies like Google, ING, Prudential, GS, Doosan, Tiffany, Bulgari, Louis Vuitton, Diageo… certinaly a CV builder. The number of CEOs on the books doesn’t do any harm either. The best thing, however, is the opportunity to watch as students go from mumbling Konglish speakers to confident, expressive English speakers. It gives a great sense of pride. Combine that with an almost total lack of young children being forced to learn English by their mothers, and Berlitz students are about as good as you could ask for. And I haven’t even mentioned IZM or the Google offices…

10. The benefits of the corporate lifestyle – Without the dull working life, excessive paperwork and pandering to the boss.  Free tickets to football and baseball, endless meals ‘on the company’, nights out, expensive conference rooms. Access to all kinds of different corporate benefits. And all I have to do is know a bit of grammar and have the confidence to abuse someone’s English into shape.  I know which side of the table I’d rather sit!