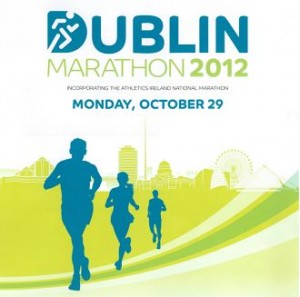 I stood on the start line of the Dublin Marathon a little bit terrified. This was my third marathon, but my first in more than seven years (coincidentally, also the time biologists says it takes every cell in your body to be replaced). With training having fallen apart at the end, I still had an occasionally throbbing right big toe, and I had trained for no more than 10kms in the preceeding three weeks, though I had got around a 20 mile route not long before that. This is so far from perfect preperation I had images of dropping out embarrassingly after a few kms haunting me before I started, and even energy from the pasta-heavy carbo loading the night before just seemed to add to the stress.
Still, I headed off slowly through central Dublin and things seemed a little better than I expected. There’s always an intimidation factor. I saw a man fall and not get up in front of me only about 2kms in, and felt I had to light-jog my way around for the first few kms at least, but by the time I got the Phoenix Park I was feeling fairly comfortable and a little more confident. I fell in step with an Irish navy lad, and the first 8-10 miles seemed to disappeared while we rambled at each other about all sorts; aside from the long straight lines and extremely quiet, foggy corners of Phoenix Park, the only thing that stands out was an elephant tooting loudly as we went past Dublin zoo.

In fact, things seemed decent enough until 15 miles, which was about three quarters of the way through the longest training run I’ve done. I knew it wouldn’t last, so when shortly after that I started to really struggle the biggest shock was that it took so long. I think it’s probably true of most amateur marathon runners that at some point during the race things just fall to pieces; while I’ve only had one complete disaster in my four attempts (the first one, when I fell over a bottle and sprained an ankle), I’ve never had a run I’d describe as smooth. I was plodding my way through the Rathfarnham area of south Dublin at a pace where running wasn’t all that much quicker to walking, but I forced myself not to stop entirely except after the water stations, where I stuffed a huge volume of sugary rubbish in my mouth and washed it down with as much liquid as I could manage.

Some parts really are a blur. I clearly remember the slog along the main road towards RTE in south Dublin, but the routes leading on to and off it are just places I managed to pass, right up until I began to recognized the locations around the RDS and the Convention Centre. I really couldn’t tell you a thing about those few miles, apart from that they hurt. By then I had my iPod stuck in, distracted by a combination of awful tracks from sponsors (ouch – that horrible Taylor Swift track in particular was a form of torture) and football radio phone ins where the callers debate minor points so strongly that I find myself concentrating on them rather than putting one foot in front of the other.

But eventually I got there. My best marathon time is just over four hours, so under the training-less circumstanes I was pretty delighted to nudge my way over the line a few metres from my office in 4 hours 34 minutes and a few seconds. It hurt, and I remember feeling really frustrated about having to walk in a big loop via St Stephen’s Green rather to get from one end of Nassau Street to the other. I was too tired to complain about, but also had a completely overwhelming sense of relief.

Then I stuffed myself with an incredible amount of pizza, discovered which parts of my body were most damaged (knees, left shoulder and lower back for some reason), and pretty much immediately wanted to do another one with proper training. I remember these things being addictive… the next day meant an early morning flight to El Salvador and legs made stiff by nearly 24 hours on a plane. I could never regret that, but equally, next time I might plan a couple of days off afterwards.