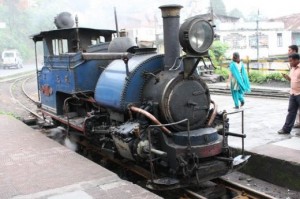 There are two ways down to Siliguri (which a horrible little town that’s basically the centre of everything in West Bengal) from Darjeeling. A three and a half hours bus journey, or an eight hour train journey. It doesn’t take a genius to work out which one I went for.

The Darjeeling toy train is a world heritage site, one of the last working Himalayan hill trains that runs in and out of the clouds every day on one long cliff edge. The views were incredible, and at that speed there’s plenty of time to see them. At the higher points you can see ridge after ridge heading off into the distance, all covered in tea plants and exotic looking forests full of orchids and huge leaved palm trees. Further down there are views down into the plains, with visibility of far enough to see how a river develops as it flows down from the mountains.

At over one hundred years old, it’s a miracle the tracks were ever completed at all. The parts where the train stutters along a cliff edge – with huge rises on one side and huge drops on the other – seem beyond the realms of all but the most modern technology. When flatter, square areas appear the train doubles back on itself in a big loop, making full use of the space to lose altitude. When the track gets too steep to go straight, there are a dozen or so Z sections where the train has to go backwards and forwards and edge its way down the mountain a few metres at a time. 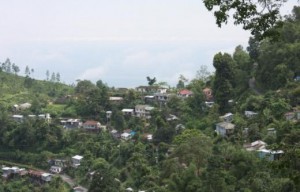 It’s all very impressive, though even the views and the technology get a little dull after 8 hours of very, very slow progress (the road distance is 82kms, so I make that an average of just over 10kms/ hour!). I was more than a little happy to arrive back in Siliguri, and stopped off for just long enough to eat before making my way to the Nepali border.

There’s something about land border crossings that freak me out a bit. The EU ones are fine (though some of the hot air balloon crew had some interesting problems going in and out of Switzerland a couple of years back), but elsewhere I feel like they’re looking for a way to trip you up, working under the assumption that if you’re not flying, you must be looking to avoid security checks. The cycle rickshaw man who took me over the India-Nepal friendship bridge at Panitanki didn’t help either, cycling straight past the immigration checkpoint despite my protests, and getting us chased across the border by the guards, who I’m sure had at least one hand on their weapons. When they caught up with us they seemed more amused than anything, fortunately, though perhaps only as I was already clutching my passport in clear view and looking a little pale. A quick exit card and stamp in the passport were enough to get me out. 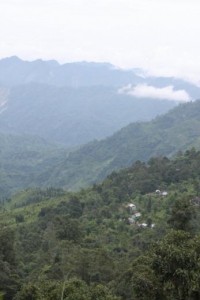 The Nepali side was similarly nerve racking. “You have US Dollars?” was the immigration guy’s first question. The temptation to answer sarcastically about their generally being unnecessary between India and Nepal was a hard one to resist, but I did, and just said no. To which he said just “problem”. Oh dear. I went ahead and filled out the forms anyway, adding my carefully prepared passport photos and hoping my “blunder” wasn’t going to cost me too much. 2400Rs was the damage, around double the Lonely Planet’s “equivalent of $30” fee (note the word equivalent!). I wasn’t going to get in an argument over fees with immigration officials ten minutes before both borders were due to close, which would leave me with a pleasant night in (an actually really quite stunning) no man’s land, so I paid up, and now I’m holed up in a hotel in the south east Nepali border town of Kakarvitta getting ready to sleep off a very long days travel.

But I’m in Nepal!