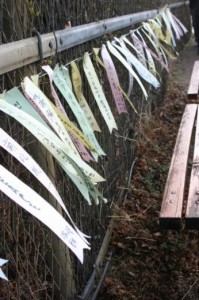 As a sneak preview of my North Korea trip, on Sunday I finally made it to the Demilitarized Zone. As probably the biggest tourist attraction in Korea (depressing, isn’t it!) it’s really quite amazing that it took me this long, but then my total aversion to being shepherded around any kind of tourist destination by irritating local guides probably has something to do with it. To get to the DMZ you have to take the ‘Freedom Highway’ from Seoul. This has to be an ironic name: the highway is surrounded by bleak open land throughout (to make spotting enemy soldiers easier) with thick barbed wire and watchtowers on either side for the entire length. I never realized how much the Northern outskirts of Seoul are set up for dealing with an attack – the North Western suburb (Ilsan) offers a tax break to residents as it is a ‘speed bump’ for the North’s attack. All of the roads contain bridges with collapsing mechanisms and easy ways to destroy the roads in order to slow the Northern army’s advance. And it takes less than an hour to get to the DMZ. In other words, should the North start an invasion now Seoul could, theoretically, be overrun before I eat my next meal.

The first thing you see at the DMZ is Imjimgak Park: a park built by the families who were split by the countries quick division in memory of those they hope are still alive and well on the other side. It’s small, but being draped in tribute ribbons, national flags and memorial statues it’s deeply moving. The reality is that most of the divided families are dead now: the drive for unification on the basis of family reunion is virtually a thing of the past, as are the border-side scenes of families breaking down in tears holding pictures of their long lost brothers and sisters and dreaming of their homeland. Insensitive tourist sites seem to have taken over – numerous convenience stores have sprung up around the border area, as has a large theme park, which seems particularly inappropriate (and also totally unused). At this point the border is a river, so the only access to the North is via a heavily guarded bridge and train line, locals stare thoughtfully at the ‘other half of their country’ only a couple of hundred metres away.

Next up is the land area of the DMZ: littered with landmines and patrolled by huge numbers of soldiers (demilitarized – yeah right!). We had to pass through passport control before arriving at ‘the 3rd Tunnel’. The first thing you do at the 3rd tunnel is watch a short documentary about the DMZ – a frankly laughable piece of pro-unification drivel that talks about the DMZ as a symbol of peace. Personally I don’t know how they arrived at this conclusion – it’s clearly a symbol of war – but it does hit upon one interesting point. The DMZ has become a haven for wildlife. As a 4km wide strip stretching for miles across all of Korea it contains wildlife and fish stocks at the same level as they would be if humans weren’t around at all. Being completely undisturbed – save for occasionally being blown up by land mines and freaking everyone out – there is a huge population of things like deer, birds etc. 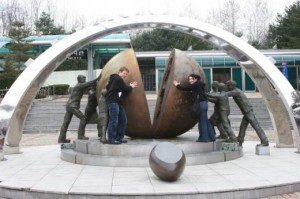 The third tunnel itself was discovered in the 70s. It is an attempt by the North to invade the South by sending an entire army under the DMZ, well after the peace agreement was signed. North Korea made the laughable argument that, firstly, the tunnel was built before the peace agreement and secondly that it is actually a coal mine. To get to the tunnel – which is around 75 metres below the ground – you have to walk down a long steep walkway wearing a bright yellow miner’s helmet. At the bottom you can walk through around 300 metres of crudely exploded, claustrophobic walkways which could have bought a particularly large quantity of soldiers unnoticed into the South in the space of only a few hours. Here we discover why the North’s tunnel claims are so laughable – the ‘coal’ is so clearly just painted onto the walls that it’s embarrassing. Placards tell us how the tunnel was originally discovered: someone heard the constant underground explosions.  At the end of the tunnel you reach a concrete wall – the first of three which prevent access to North Korea by this route – heavily guarded with barbed wire and narrow slits through which to observe the other end. Just outside there is a statue: a symbol of the unification of the two countries. The North is printed on one side and the South on the other, with people from both sides working to force the countries together. Even for the statue reunification seems a long way off.

Thirdly we visit the Dora observatory. This is a hilltop viewing point from which you can observe North Korea. In the distance there are two of the biggest flags in the world, the products of a long term battle between the two countries to produce the largest piece of fabric propaganda. The North eventually won out, with a 160 metre flag pole holding the heaviest and largest flag in the world. The cost? $3000 dollars every three months for the starving country, to replace the weathering flag. It hardly seems a worthwhile use of the money. Aside from this, the view is a simple mountains scene, which apart from lacking any noteworthy buildings has no really exceptional features. No propaganda speakers, no Communist symbols, just a row of watch towers pointing threateningly towards each other and lots of guards in dark glasses and hard hats.

Our final stop is Dorasan Station. The South’s great hope for the future is held up in this train station: wall murals depicting hands reaching to unite, signs stating the distance to Pyongyang and an unmanned immigration post. This has to be one of the biggest stations outside of Seoul, modern and hooked up, ready for the time when the South can finally connect by rail through to China and the rest of the world. As a symbol of Korea’s hope it’s somewhat depressing: it’s clean and smart, showing no signs of any use whatsoever. A vague hope rather than an expectation. Despite all the reunification hopes, if anything things are getting worse. Isolated by the collapse of Russian communism, North Korea no longer seems to harbor hopes of a successful invasion, but aggression is shown at every possible opportunity. All this, and only an hour from Seoul. A depressing, but informative way to spend a Sunday!