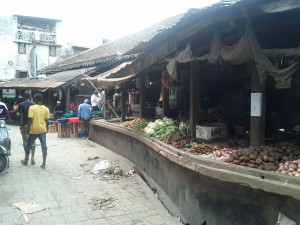 Instead of following a strictly chronological form of blogging at this stage, I’ve decided to divide the Tanzanian island of Zanzibar into two sections: the toned-down island hustle and bustle of Stone Town, where we spent our first, fourth and fifth days (this entry) and another to cover the extreme relaxation of the island’s east coast and our stay in Jambiani, a sleepy little tourist stretch that’s every bit the tropical paradise.

We came to Stone Town, Zanzibar’s capital, via an extremely long and uncomfortable bus ride from Arusha to Dar Es Salaam, Tanzania’s largest city, which took a touch over ten hours and had only a single saving grace: that it took us far, far from Arusha, a city that we’d both come to utterly despise. At this point, so many cock ups had accumulated on our trip that we were beginning to refer to is at ‘Murphy’s Trip’, and the bus – that’s meant to take around seven hours – arriving after ten, and resulting in us missing the last boat to Zanzibar having already booked and paid for our hotel from Arusha was just another layer to the ‘what can go wrong, will go wrong’ cake. Missing the ferry involved a manic taxi drive, a half-hour period when we thought we might just be able to grab the final tickets on the last one, difficulties with payments methods, a sprint to the ATM in the sweltering heat after a ten hour sweating bus journey, and finally the ferry technician deciding that he just couldn’t quite fit us in. We could have gone down the bribery road, but it had already been expensive enough, so we settled on 7am the following morning instead. Fortunately, Zanzibar’s since done a great job of washing all the mainland’s accumulated frustrations away.

What this did mean was one night in Dar Es Salaam. While we didn’t see much (nothing, really, in sight-seeing terms), the laid-back atmosphere and transparent financial dealings (finally) gave a great first impression. We’ve heard the beaches are quite something, too, but in the twelve hours we were there, we mainly slept and enjoyed an extremely good meal. 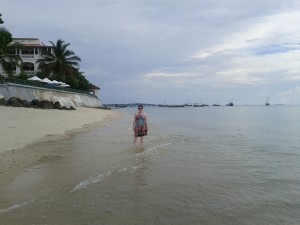 At first, Zanzibar lived up to the Murphy’s theme… on arriving in port, an overzealous immigration official decided that Helena’s visa fee had been underpaid. We paid the sterling equivalent of $50 at the London embassy (as there isn’t one in Dublin), and apparently in a reciprocal fees agreement, Irish citizens have to pay $100 instead. Technically we were already in Tanzania, but Zanzibar likes to see itself as a bit of a country in its own right, and the port official ended up allowing us in to the country, but not before confiscating Helena’s passport and demanding that we come back with the appropriate payment. We suspected the entire thing might be to line his own pockets (we’ve since found out that he was actually correct, though the Tanzanian embassy in Ireland makes no mention of it on their website, so we went by the UK fees, for which they happily issued the visa) but we had little choice but to pay up. More money down the drain.

Still, with all that sorted, Stone Town – once you get past the incessant touts who only show an interest as you pass through port – turned out to be utterly charming. It’s full of densely packed narrow roads between houses that seem to almost meet at the top and block the skyline, while the tiny beach has perfectly clear swimming waters right next to the port, and the luxury hotels offer wonderful beach-front cafes where you can drink an iced coffee under the palm trees and watch the world go by.

The markets are gorgeous, especially late in the evening when the insistence that you enter every little store dies down a little, and we’ve been drifting about the streets supping on freshly cut-open coconuts, climbing to the rooftop restaurants to eat local cuisine looking over the sea front, and at night exploring the seafood and banana and chocolate pancake options in the botanic garden’s night market. It has the feeling of a real high-end tropical holiday destination (and at times, for Africa at least, the prices to match – but then I’ve been continuously surprised by how expensive I’ve found Tanzania in particular since we arrived), mixed with a charmingly strong edge of local pride. 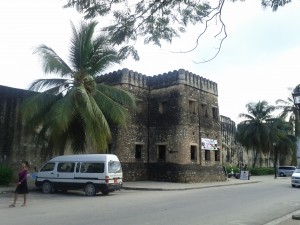 Just the shopping and eating in Stone Town is more than enough to keep us occupied, and I say that as a man who hates shopping, normally. The market stretch almost endlessly, with the local side arguably more interesting (and much less hassle). I added to my small collection of unusual football shirts (I have a Thailand national shirt from the year I visited there, and Villa ones from various trophy winning years… i.e very old!) with a Zanzibar ‘national’ team shirt, and uncovered a brilliant cucumber shower cream that advertises itself as able to ‘dispel horniness in thirty seconds’. Someone having a lot of fun in a translation department somewhere, I’d imagine! We’ve also brought some wonderful artwork to go alongside the stuff Helena brought back from her Trocaire trip to Uganda last year, which I plan to re-frame when I get home and turn our living room into even more of a travel shrine. On the food side, I tried a beef and green banana coconut curry, in which the stewed green bananas taste almost exactly the same as a potato, being extremely unripe.

The local museum’s known as the ‘House of Treasures’, and has a slowly deteriorating dhow (local rustic boat) in the lobby, and a few relics of Zanzibar life before the tourist industry took over. Zanzibar’s had a rocky history, riddled with issues with inequality that were dealt with in part by a revolution back in the 60s (there are still numerous references to the revolutionary government about town), as well as some interesting incidents over the years when it comes to spice trading (which spread as far as Indian and brings in quite a few of the sub-continents flavours) and explorers.

It might have turned into a little bit of a tourist hotspot, but Stone Town’s also got a depth to it; if it wasn’t for the intense heat I could have spent an age exploring the back alleys. As it was, for all its early hiccups, Zanzibar was certainly the highlight of our trip.