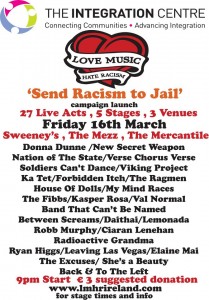 The night befot St Patrick’s Day is traditionally a bigger night out than St Patrick’s Day itself. As the 17th is always a public holiday in Ireland, the 16th is the obvious night to hit the town, party like the next day doesn’t matter and – at least if you’re a local – refuse to go near anything that resembles a green Guinness. This year was a little different, with the 17th falling on a Saturday, but the 16th was still total chaos, especially when you factor in the surprise birthday party Helena’s friends threw for her. The evening was odd to say the least. Helena came home from work tired, so I had to act really hyperactive (only part an act, as I get like that when I have a great secret to keep) just to get her out of the door. Over the course of the evening I also had to go out to ‘meet a friend’ and pick up Helena’s brother Sean’s bag, then smuggle it back in to the house. Luckily, the night was also a work event for Helena (she went down as ‘support’ rather than actually having to do anything, involving Love Music Hate Racism, which made things a good deal easier (see image, right).

It all went surprisingly smoothly – Helena clocked my hyperactiveness but not what it meant, and said afterwards that the first moment she was even confused was when I led her straight past the upstairs bar. Five metres later, 20 or so of her friends had lept out on her, sprayed her with party poppers and she had the biggest smile I’d seen since… well, New York, but to be fair, it was a pretty damn good week! We saw precious little of the festival (though it has to be said, I thought headliner Donna Dunne was excellent), and it ended a touch early when somone getting knocked out on the dancefloor meant they had to empty the entire place. Typical of the nights surrounding St Patrick’s; it just gets a bit too messy, and people drink FAR too much. And I can say that as someone who was drunk for most of the weekend for the first time in a long, long time (best St Patrick’s to date, easily).

Here’s the cake, and a rather amusing picture of Helena posing with a whole lot of naked women. Who apparently form an album cover (not one I recognize, I have to admit), and grace the back corner snug of Sweeneys. Lovely. I mean the cake, obviously… 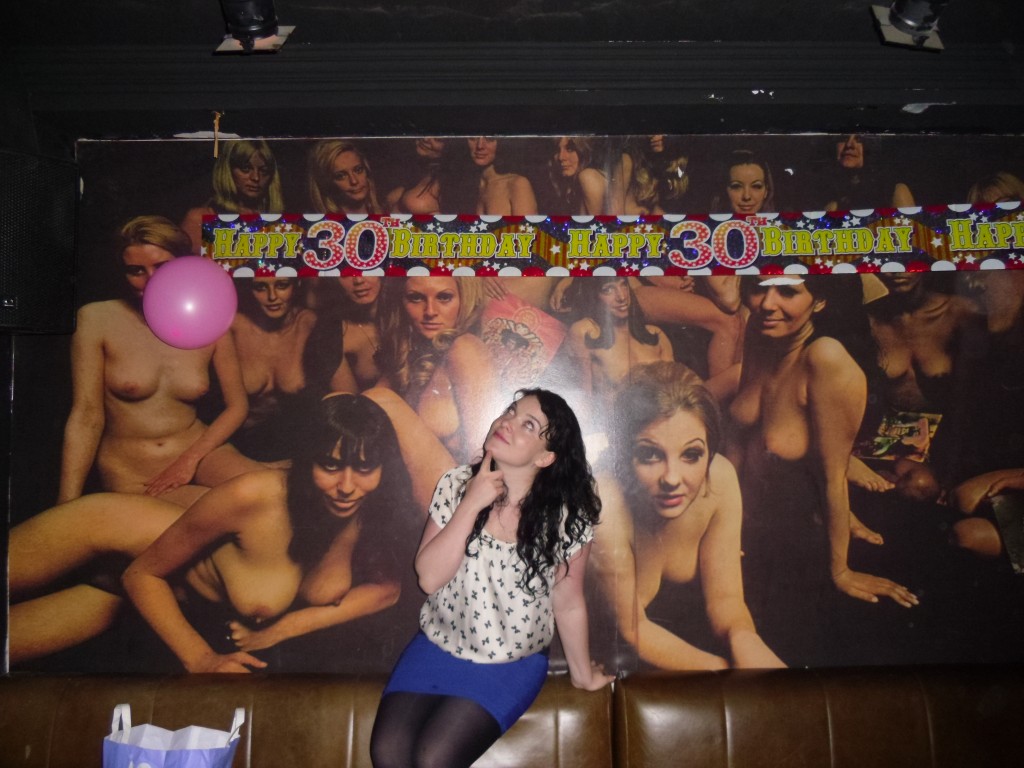 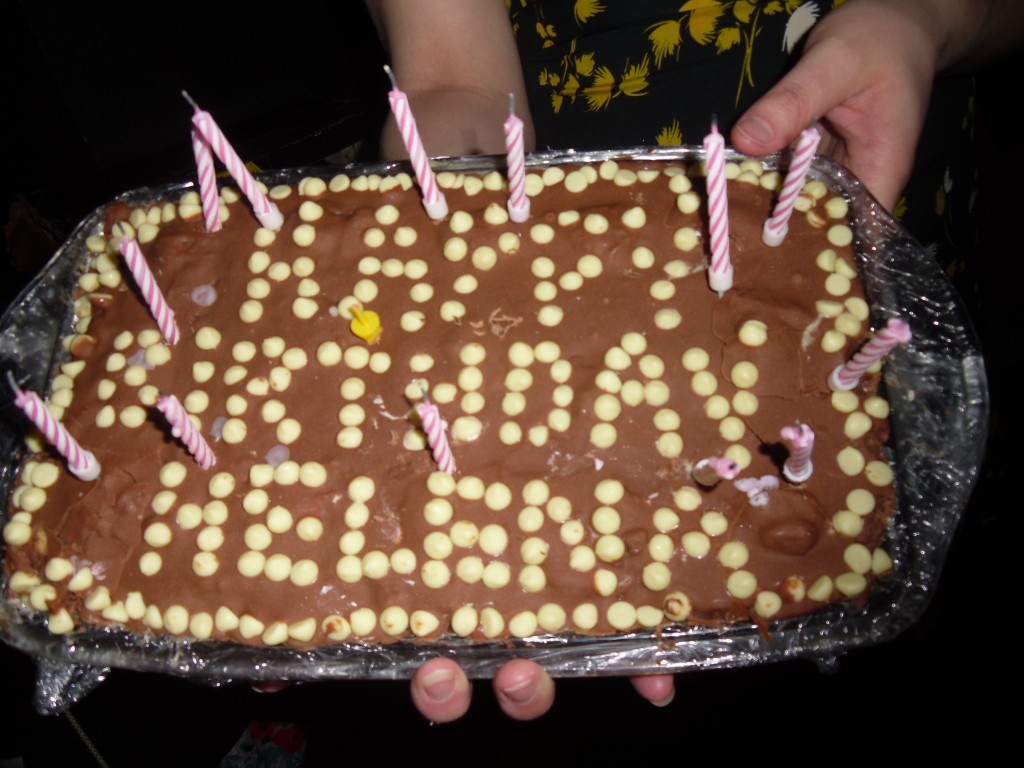 So that was all a bit of a blur.

Since Helena’s worked in her charity, we’ve been using their roof to watch the St Patrick’s Day Parade. It’s fair to say that getting to this one was a lot more difficult than normal – having collapsed in to bed at 4am the night before, we reached the roof at a little after 11. As I only get to go there once a year, I always find the view pretty overwhelming, and this parade was probably the best I’ve seen since living in Ireland. So much for the recession. We watched it whilst supping champagne – the only appropriate hangover cure on St Patrick’s Day is to just keep going – and worrying about the consequences should our grip fail and the glasses fall into the crowd below (we were holding them very far from the edge once the thought occurred). I’m going to put an entire gallery of pictures in for this, which will also include the other ones (because I’m not much of a WordPress fiend), but it’d be a shame not to put a heap of these up. So here’s a large handful of the best of the St Patrick’s Parade in 2012:

Later in the day I was faced with the weird situation of having to watch England vs Ireland in the rugby on St Patrick’s Day. We decided against the pubs – a decision I’d normally object to, as I feel if I’m going to live somewhere I should be able to express myself in any way I choose – and watched at home, with me having stripped off the green I had on for the parade, as it felt a little too odd. As you probably already know, England utterly battered Ireland. It’s fair to say I enjoyed it, though I don’t think it’s a fair reflection of the teams: Ireland’s diabolical scrum clearly cost them the game. I’m surprised it didn’t cost them more games, performing at the level it did against England, but perhaps the use of Tom Court had a lot to do with it. Plenty of Ireland fans seem to think so, and the man certainly isn’t an impressive player from what I’ve seen.

Of course, we had to head back out and take in the St Patrick’s Day atmosphere, and we ended up doing so with heaps of free whiskey, through this: 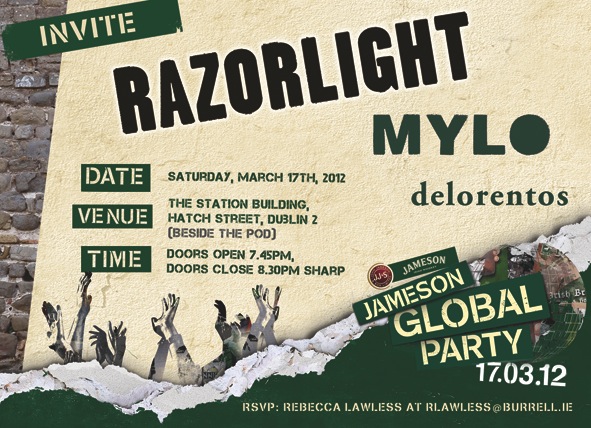 I still don’t really understand how we got in, having not received either an invite or RSVP’d as suggested on the above. Something to do with a friend’s dad, as far as I can work out, but anyhow, Razorlight sound pretty great when you’re surrounded by extra-strong, free whiskey mixers, and large piles of hot dogs. Of course, one gig is nowhere near enough for a night like this, so we headed to Twisted Pepper to watch just a little of Andrew Weatherall, too. By far the best St Patrick’s Day I’ve seen so far, both in terms of parade and really making the most of it. The trick seems to be to go as big as possible!