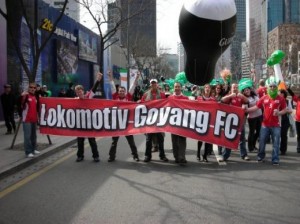 No one ever needs an excuse to celebrate St Patrick’s Day, but if they did then I think an Irish girlfriend and predominantly Irish football team would have to qualify. Seoul holds an annual parade, in which lots of expats walk around one of the biggest city centre areas wearing green, waving flags and generally behaving in a way that completely bewilders the locals.

My football team, Goyang, succeeded in grabbing ourselves a place between the US Marine band and the very large Guinness ‘walking party’ – not a bad place to be! We trekked around in our bright red kit drinking local beer (much to the dismay of the Guinness salesmen), hitting locals over the head with a large inflatable hammer and showing off our huge team banner. The parade was really quite impressive – it stretched for about a mile around central Seoul and incorporated a large green dragon (strange cultural clash!), what looked like the Korean branch of the Hells Angels and a stick twirling, extremely un-terrifying unit of the Korean army. A big stage in the middle of town hosted B-Boys (a.k.a diabolically awful break dancers); local university cheerleaders and a Korean interpretation of traditional Irish music. Not quite the same as it will be in Dublin this time next year but we couldn’t have asked for much more half the world away. The city centre stream was even dyed green, apparently.

Korean Granny does St Patrick’s Day: http://www.youtube.com/watch?v=z-vkL6A5hKs. This woman tried to steal our beer as well!
Having postponed our match on Sunday, Saturday night was obviously going to be a big one. Clubbing involved a fantastic U2 cover band, hitting loads more people over the head with plastic hammers, green beer and two depressingly average performances from normally excellent local bands. I guess it couldn’t be perfect.

Last week was once again one of the hardest working weeks I’ve ever had: in fact I’ve worked so hard since getting back from the UK that I’ll be earning substantially more than normal this month despite taking that week off. This week looks like being a bit of a quieter one, which I’m pretty relieved about. Highlights of the week included White Day – the highly commercially motivated Korean ‘second Valentines Day’. One of my groups of students showered me with Ginseng Candy, which I found quite entertaining. Sunday was spent wondering around various department stores – most of which look like they come fresh from a magazine on interior design – and eating some world class curry in Dongdaemun Market.

Moving On: This is still very much only in the pipe line (I’m hoping no-one at Berlitz makes the effort to read this, though I’d be surprised!): Helena and I are going to try and move on somewhere else for the summer. I’ve loved Korea, but Seoul life is unbelievably hectic and I think I need to go and chill out somewhere after more than a year (or it will be by then anyway). It’d be nice to go somewhere tropical and beach-side to teach for a little bit. Who knows if it’ll actually happen, but we’ll certainly be trying our best to find something. Watch this space! If not it’ll be straight to Dublin in August, which won’t be too bad either!

That’s all for now, till next time!