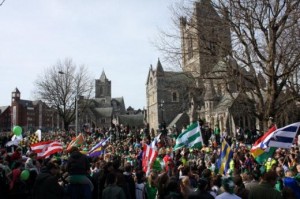 In the build up to St Patrick’s there’s a really noticeable change of atmosphere in Dublin. Flags are hoisted from every building, the number of tourists goes through the roof and the locals suddenly seem to have a far more positive attitude to life. I’m sure Paddy’s day lining up perfectly with the start of spring is a coincidence, but it’s a great one. The sun came out properly for the first time this year at the same time as the festival, and it made all the difference.

I went down to the parade, which weaves through the city from Parnell Square in the North down to the catholic cathedral in the south, a long route that takes about two hours for the slow moving walkers to get around. The atmosphere down there is fantastic – people fill the roads 7 or 8 rows deep, almost everyone dressed in green, faces painted, orange beards and sporting huge ties saying ‘kiss me I’m Irish’.

Every single vantage point – including roofs and narrow fence edges – is taken, I perched myself on the top of a bollard with my camera opposite the cathedral and snapped away.

The parade was far more impressive than I expected. Having waited an hour and only had a single Simpsons-themed float come by, the rest of the parade finally started to drift by. It’s a strange mix of traditional Irish themes and imported brass bands from American Universities, Italian drummers, German dancers and Spanish theatre performers. 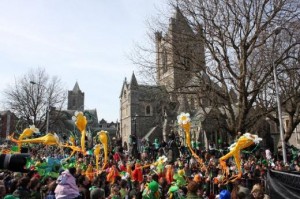 Amongst the floats that drifted by was a huge King Kong, a fully motorized pecking bird the size of a truck and a large collection of room-sized inflatable bugs. Perhaps I’m odd when it comes to parades, but I usually enjoy the flags the most, possibly because they create such a nice image in a photograph, much more eye catching than a blockier float. There were plenty of them to, with the colourful flags of the Gaellic football teams the highlight.

There was a strange collection of ‘strong men’ who carried a digger, an upside down cow, a huge dog, a Stonehenge-style stone, a pile of dishwashers and dog sitting on top of about 15 very heavy looking bags. I assume they were all made from polystyrene, but it looked great.

The Spanish float was probably the most impressive, with huge feathered birds built on to metal frames, creaking as they went down the street and swung their beaks down inches from the audience. Great fun.

After the parade we took it pretty easy, drinking a few beers at home and watching the club finals of the Gaellic football (Which I’m just starting to understand, and really enjoy), and hurling (a little less interesting – too much a case of lobbing the ball over the sticks from a massive distance). The city centre is apparently absolute mayhem on Paddys’ Day, so sacrificing a long wait for a green beer was bearable, especially knowing I had to work early the next morning.

St Patrick’s Day was good, though I’m amazed how far people are prepared to travel to be there. The town was full of Americans; I can only assume that it’s some kind of pilgrimage (when you’ve travelled a bit with Americans you realise a lot them don’t consider themselves to be so much American, more ‘Irish-American’ or ‘Italian-American’, though the links are invariably pretty tenuous and ancient). It would definitely be a good day if something similar in Britain, though I don’t think many Brits are anything like as proud of our nationality as the Irish. At least I’m not!

It was a good day, though a lot quieter than it could have been. Down to Mayo this weekend to meet the new baby!