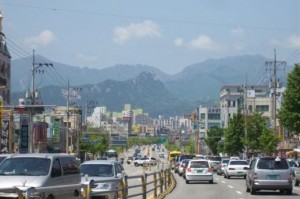 I love Sokcho. Ever since that 24 hours of mayhem with Jason last year it’s been my favourite place in Korea and I’ve been waiting for the summer to come back around and make it all worth doing again. Well in Korea, May counts as summer and the three day weekend (second in two weeks!) was more than enough excuse. Having spent Saturday with a few students eating dinner and going to the cinema, I headed off the East coast with Helena and a few of her friends and eventually arrived very late Saturday night. It took all of three second to remember why I love this place so much: within a couple of hundred metres of the bus terminal there’s a gorgeous white sand beach sloping down to pretty much the only clear water area of sea in Korea and dozens of locals setting of fireworks and throwing each other in the water. The fact that wind chill factor must have bought the temperature down to around 10 degrees didn’t seem to bother anyone.

Sokcho has an impressive mountain backdrop on one side and a beach on the other: a perfect travel destination combination! On the first day we decided to go to Seoraksan national park – the mountain one of the two. There must be thousands of different pathways to choose from, we simply picked one and followed it until we reached a Buddhist temple cave in the side of a huge mountain, which could only be reached by hundreds of highly precarious steps. On the way we passed waterfalls, inspirationally labelled landmarks (like ‘rock’, ‘trail’ and ‘peak’ and a whole loads of countryside restaurants with views that if placed in the Swiss Alps would demand a $200+ a meal price tag. Fortunately this is Korea and the local pancake overlooking what felt like half the peninsula cost less than half of that :). The peaks in Seoreaksan are such dramatic, scarred walls at the top that they cast jagged shadows across the landscape and look at times like they’re about to collapse on top of you and frequently require climbs that are far more up than along despite the zig-zags. Lucky for me I was climbing with a group of girls who drink a lot and looked like the fit one of the group! The photos are spectacular; I’ll put them up here as soon as I can. A plan to go back again is already being hatched!

The second day we spend actually in Sokcho. It’s a town about the same size of Salisbury in the far North East of Korea with gorgeous beaches, countless seafood restaurants and a strange ‘ancient and modern collide’ feel to it. Right next door to the Baseball machine nets (great fun), internet cafes and modern harbours you can find barbed wire to prevent a North Korean invasion, old women dancing on benches to ancient looking radios and a boat that pulls people across that harbour using a handheld wire cable. All incredibly quirky and really interesting. The highlight of the day in Sokcho was the speed boating: we went out off the beach and leapt of waves, pulled donuts and got absolutely soaked to the bone.  The guy driving kept the boat out of the water more often than in it (barely) and finished up by charging up the beach so hard he landed well beyond where the waves break. Having spent most of the time connected to the boat only by an extremely white-knuckle grip I was happy it was over, but wanting more within five minutes. Awesome.

After that I left the girls to shop in the city centre and walked around the harbour for a couple of hours. The squid boats with their huge neon lights and huge nets full of puffer fish are strangely infectious to watch, as was the strange hand pulled boat – 1 penny a trip and you have to power it yourself. Extortion! :P.

I love this place. I’ll resist waxing lyrical about all the quirky things on offer because there are just too many (we resisted the submarine this time!), but I know if I ever come back to Korea this is where I’ll live. Return trip in a month of two I’m thinking. I’m really going to miss these long weekends!