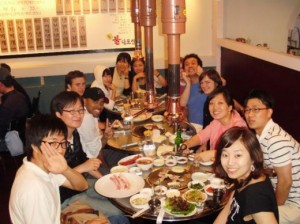 My week started with the biggest project Ive ever had to do for the writing: a 52 page, who-knows-how-many word beast that I finally submitted on Friday with a massive smile on my face. All research towards the book, Im awaiting news on the next stage, but Im assuming its going to be to start writing instead of mess around researching any longer.

With that out of the way, this week turned into the kind of ongoing uber-party that I feel is completely justifiable bearing in mind my exertions. Not that I normally bother with the justification

Friday night was another night out with IZM. Ive said it before and Ill say it again: IZM Design are the greatest English students in history. I know, that pretty much means nothing to anyone outside of Berlitz, but wow! Whilst most of our students are dour businessmen, these guys are work-hard play-hard alcoholics who have more personality then they know what to do with. Normally trying to persuade an English teacher here to drink with their own students – never mind anyone elses  is camel through the eye of a needle type stuff, at least after the first few weeks. Generally were all pretty sick of correcting people and broken English by the end of a working day. It says it all, then, that every night we go out with these guys more people come.

This one was particularly good: Marielles birthday at midnight meant a singing room inspired (it sounded good when wed had a few) Birthday Party. The fan came out, we took it in turns to stand in our home made wind tunnel and belt out bad renditions of shocking K-pop songs with a heavy wind blowing through our hair. Of course we had the usual BBQ beforehand and the chicken and beer pub exertions afterwards (Koreans literally cannot drink without food in front of them  very bizarre), so by the time we stumbled home at 4am Saturday was always going to make for a pretty tough day. You call it drinking; I call it cross-cultural exchange.

Sunday I finally moved in with Helena  something Ive been anticipating for a while but still find almost as scary as exciting. I guess Im just wondering how long itll take me to annoy her! Its been great so far, mind, so touch wood thats how itll stay. For the time being were living with another guy called Stuart, who also works for Berlitz, though hell be going home in a couple of weeks and well have the place to ourselves. The main issue so far is the complete lack of furniture  as both of us came from furnished apartments  so were currently sharing a mattress surrounded by huge heaps of luggage, but were working on it.

Our new neighbourhood  which is a whole 500 metres from my old one  is far more Korean, full of old men playing board games in little side streets (probably trying to escape the batty old Korean women, who seem to be pretty much intolerable); high quality BBQ restaurants (mmm) and tiny little flower filled back alleys. There are still foreigners about, but were in a massive minority compared to the other side of the main road. I love it.

Helenas just started a new job in which she works a massive 3 hours per day (Im insanely jealous) and basically spends the rest of the time enjoying Korea and relaxing. Her new colleagues seemed really nice from night out Mk 2 on Saturday as well. Im convinced that after my recent work efforts if I ever only had to work three hours a day I wouldnt know what to do with myself after about a week. That kind of fantasy will have to wait until after Korea, for now its all work, sleep, write and occasionally party to forget about it all. Until my second North Korea trip in two weeks that is