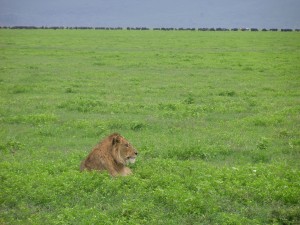 If Tanzanian Safari camps have one thing in common, it’s that they all have absolutely awful bathrooms. Even the incredible Simba Camp, which has huge storks strolling around the open fields when we arrive, immense views across the Ngorongoro Crater itself and – when the sun goes down – offers such clear views of the night sky that it feels almost unrealistic, like you’ve transported yourself to a grassy local planetarium, has bathrooms that look like they haven’t been washed in a year or two, and showers despite a steady flow of unfeasible cold water (given the outside temperatures) could actually succeed in making you dirtier.

The camping style of safaris is distinctly lazy, but given our slightly decrepit state (sweaty, buttock bruised from the bumpy roads, in various states of stomach illness and bitten pink by the local mosquito swarms), depositing the cook at the campsite early in the day to prepare a hot dinner to follow our bizarre selection of in-jeep carrot and tomato sandwiches and put up our tents for us seems like a good way forward.

Ngorongoro Crater is so beautiful it’s bordering on otherworldly. A 20km square area surrounded by sides hundreds of metres tall is entered via a muddy, sliding track with sheer drops down the side, and levels off at the base, eventually reaching a soda lake rammed to the gills with flamingos, giving it a pink tinge. Cruising in, parking up at the roadside as soon as the land flattens and turning off the engine leaves an intense silence, completely unbroken by thousands of zebras and wildebeest ignoring us, grazing and stretching to the mountainous crater limits in every direction. The crater attracts so many animals because of its abundance of water and long grass at this time of year. It’s said to have originally formed when the previous highest-mountain in Africa (the local guides, at least, are convinced that the mountain that used to stand here was significantly taller than Kilimanjaro), blew up due to volcanic activity, forming the entire plains of the massive Serengeti National Park with the resulting lava flow. Given the size and completeness of the towering surrounding walls, it’s genuinely difficult to imagine how some of the bigger animals actually get in, but clearly they do. 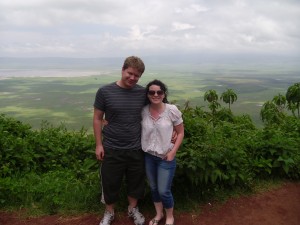 While Ngorongoro itself, even devoid of wildlife (which couldn’t be further from the case) would be stunning, it’s the closeness and access to the entire community of animals that makes it so special. Driving around, we see a hyena trying to pick off a zebra baby, and a group of adults turn on the hyena and charged him away as the baby and its mother run off into the distance. The guide tracks down a hyena burrow, where one adult remains behind with two gorgeous little puppy specimens, who we watch play fighting for ten minutes, completely unaware of what’s going on around them. Apparently, if you take a cheetah baby home and keep it as a pet (which I’m not advocating, of course), it’ll grow up to behave not unlike a house cat, but a hyena, even the adorable puppy like things that we see, will grow up to feast on human babies. Lovely.

The zebra and wildebeest in particular are so abundant and so scattered across the Crater that the guide has to serve the jeep to avoid them on the road at times; I’m particularly in love with zebra – they’re just so stunningly stark, like a modern-art horse, really proud. I never imagined that the colours could be quite so vibrant. While the common animals in Ngorongoro are fascinating, spotting the rarer ones is a real rush. The most we see of a rhino – which is absolutely monstrously huge – is a grey blob in one of the areas of the park that’s entirely impossible to access, but we do get close to a family of lions, sat happily at the side of the road just staring at the cars. The size of the male is astounding, and while the guides nonchalantly climb in and out of the car (and even replace a wheel after a puncture at one point), I certainly wouldn’t want to be out in the park without the protection of a sheet of metal. There’s also a serval – a smaller and significantly less lethal looking predatory cat – sat in amongst the reeds beside one of the streams that runs down towards the soda lake, just his ears poking up as he eyes us suspiciously. 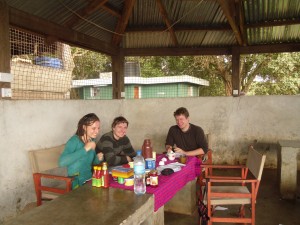 Things get a bit hairy when the rain starts falling: the Crater is so steep-walled and requires such dodgy roads that getting out becomes a real issues (though perhaps not one the guide is prepared to admit to), and even the roads within the crater started to disintegrate. The guide ended up spinning the keep through a full 180, throwing us out of our seats but escaping getting stuck in the mud (he told us afterwards we’d have had to sleep there for the night, as no other jeep would be willing to pull us out for fear of getting stuck themselves). Disaster averted. I genuinely wonder if I’ve ever been anywhere quite so stunning – perhaps the Nepalese Himalayas might just about trump Ngorongoro, or the Thai diving islands Koh Tao, but they’re completely different environments and difficult to compare.

That evening, after what I suspect was a little meat that had spent too long in a jeep (in a particularly dense moment, I hadn’t thought about the storage at the time), I came down with a nasty stomach problem that I didn’t completely shake for the rest of the safari. It turns out what first woke me was a herd of zebras chomping at the grass around the tent, though I didn’t realize that until the morning. It was almost worth it for a midnight glance at that incredible skyline.

The most famous destination, Serengeti National Park, was to fill the last two days of our trip.