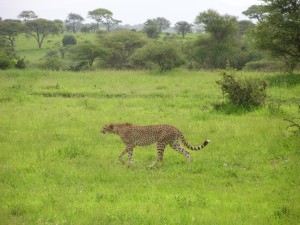 If I’m being totally honest, I wouldn’t say I’m one of those people who has always wanted to go on safari. I do love wildlife, and even more so, I make a pointed effort to see some of the more impressive scenery of the places I visit, but combining the two has never been all that close to the top of my wish list. Having said that, with two of the world’s top safari destinations just a stone’s throw (okay, a seven hour bus journey, to the launch point…) from us in Nairobi, it would be a shame to miss out. I was wrong not to have had safari near the top of my ‘must do’ list, as this was truly something incredible.

Tarangire is very much the poor relation of the other two bigger names we’re heading two, but also a nice break in the lengthy journey, and as it turns out, a stunning taster of what was to come. We’d had to delay our start by a day, as Helena was struck down by a vicious illness the night before our original start date (and so we had to cut out our original option of the flamingo and rhino stronghold Lake Manyara, and simply cut a day from the tour. As you can probably gather from my Arusha blog, the staff weren’t all that amenable to other options, unless they involved large quantities of cash). By the time the brilliantly designed Safari-special Toyota Landcruiser pulled up to take us off, she was on the way to recovery and we were delighted to be getting out of the less than loveable city of Arusha.

We shared our jeep with our guide, our cook (who turned up at the gorgeous rural guest stop on the first evening) and a young German couple on a break from her medical placement in Dar Es Salaam. When we rolled into the car park of the first national park, popped the roof to give ourselves 360 degree views of the plains around us and watch the thieving monkeys raid the contents of the empty jeeps around us, it was hard not to get pretty excited about things. The wildlife starts at a trickle: when we spot our first skinny, speedy little group of Thompson’s Gazelles, a warthog strutting along the side of the road with a small family following or the shape of an elephant silhouetted against the horizon through our binoculars, it’s more than a little exciting, but the guide knows better, and doesn’t bother to stop for too long.

Tarangire, it turns out, is a real elephant playground. We saw them in huge family groups, at first at the bottom of nearby valleys, walking around coated in that distinctive African orange-clay mud, and then ever closer, until a huge, 40-year-old male with tusks the size of my leg was strolling by 10 metres in front of the jeep, giving a quick toot on the way past to warn us off his following babies. The age, apparently, can be told pretty quickly by the tusks, and from the open roof, from which it’s easy to completely ignore the jeep beneath you, it really does feel like you’re just hovering right in the heart of elephant territory, just a little bit intimidated but largely just enraptured. 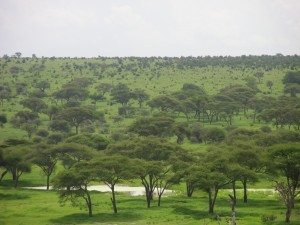 There are other animals, too, of course: families of giraffes bending down to chomp on the bushes, or stretching their necks to rip the tiny number of leaves supported at the top of the massive trunk of the Bao Bao tree; ostrich strutting nonchalantly between feeding grounds and a small group of wildebeest (our guide called them wild-ey-beasts) charging away from the jeep as it closes in on them. The bigger groups of warthog have a couple of slightly chubby adults that have to get down on their skimpy knees in order to get their mouth of the grass they’re eating (no neck to speak of, apparently), and the entire things seems incredibly peaceful. We only see one predator on the entire first day: a slick looking cheetah, sat just a few metres from our jeep in the shade of a huge tree, he glances around indifferently before eventually getting tired of the attention and showing just a tiny percentage of that legendary speed in shooting over a hilltop. On the way out, we even spot a tortoise crossing the muddy tracks that make up national park roads, and have to pause while he slowly edges out of our way.

The plains around the national parks are incredible, too. Huge green plateaus that stretch to the horizon and take on a brilliant picturesque look when the patchwork clouds turn them two shades of green, or hilly regions broken only by occasional Maasai huts, towns specializing in petrol and sugary soft drinks (even diet Coke tastes like it’s doused in sugar here), and a worrying prevalence of clapped out, shunted or rolled cars and jeeps, not helped by our guide being a cross between a boy racer and cast iron death-wish lunatic when he got going (don’t worry mum, we’re out now and alive!). 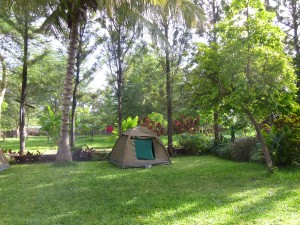 The first night’s campsite was by far our best – not far from Lake Manyara, and tucked in a secluded square behind a little wilderness bar. I stayed up to watch some premier league football with the locals (they’re all obsessed – the men at least – and nearly all, shock horror, support either Manchester United or Chelsea. The sign of a true football fan… An interesting experience, though – Tanzanians do seem to know a lot about English football, but have some interesting views on the sport compared to us. They certainly think the players deserve their money, for a start, and aside from Kenya and Ethiopia’s famed distance runners, football is perhaps the best real ‘make it rich’ opportunity that a lot of young locals might aspire to) I also sampled Safari Beer and Kilimanjaro beer to go alongside the Tukser (no sign of this fabled Banana homebrew just yet), while Helena slept for about 14 hours and shook most of the last of her illness.

Tarangire’s good, hell, better than good, but the best was definitely still to come…