This story really starts about three weeks before. I’d planned to train properly for the off-road mayhem of Run-A-Muck, but three weekends before the event we went hiking in the Wicklow Mountains, which was fine, at least until I came down, waited a couple of days, and found my feet in bits. We couldn’t work out what it was for ages – long enough that I spent an afternoon washing my entire wardrobe after the problem spread across my whole body – but the only thing I did different was stand in the middle of some gorse in the Irish countryside, so I can only assume it was that. Anyway, the end result was no training whatsoever, aside from perhaps 3-4kms around north Dublin two or three days before. So I lined up in the pouring rain at Run-A-Muck, thinking I’d be okay, how hard can 10kms be?

The answer is that Run-A-Muck is far from your ordinary 10kms. The best part of the entire event is probably the silliness. There are huge groups of friends who’ve obviously never run more than a couple of kilometres in their life, lined up in tie-dye t-shirts and chanting enthusiastically, only to get lapped by almost everyone on a two lap course. There’s a guy wearing a canoe with a hole in the bottom (who clearly knew what was coming), and then some very serious runners who seemed to skip over mud like it’s a bouncy castle. The idea that the event might be something like a normal 10kms fell apart when someone mentioned 26 obstacles per lap (so 52 for the 10kms), and got still worse when you realized that they came in strings.

The lighter obstacles were just quick hops over tyres, but then there were climbs over entire bails of hay, neck deep (and even brief moments of swimming) in freezing cold water, water pipes, slippy climbs and soggy nets. I could write an essay trying to explain it, but to get a better idea, just give this a glance:

After the first time around that, it’s fair to say I had serious doubts about whether I would make it. It was partly a lack of training, partly the shock of just how difficult the challenge actually was. I expected to find parts of it tough, but Runamuck was persistent. I’d normally be appalled to take anything anywhere near an hour to run 10kms (I’ve got in the habit of doing it at least once a week on a treadmill at the gym – an entirely different thing, I know, but I’m consistently nearer the 50 minute mark, which for someone who does precious little other exercise I don’t think is too bad). For Runamuck, I came in at over 1hr 20, but staying almost consistent over the two laps was a good effort, I though. Hell, some people took over twice as long!

It was difficult, but the only downside to the entire thing were the two hours spent trying to get out of the badly planned parking lot. That’s what muddy Kildare fields will do to you. I didn’t get a picture of myself, as I was the only one of our group running the 10km not the 5km, and by the time the others finished I had tried my best to clean and dry myself, but I think this picture of Helena, Fiona and Jessica post-run pretty much sums things up! 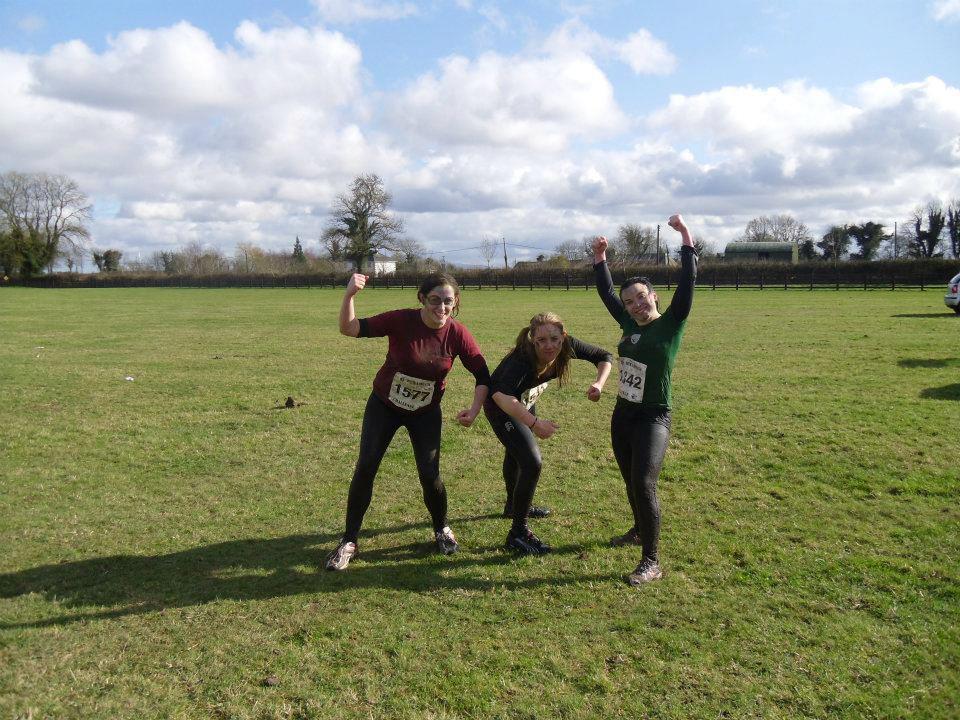