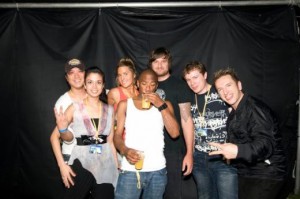 I’m still reeling from this weekend; it really was totally ridiculous. My first assignment for the new magazine – ‘Bling’ – was to cover a new festival in Seoul called ‘Next Floor’, which was basically a huge expansion of Seoul’s monthly ‘club day’ event, involving a reasonably impressive selection of international acts. I’ve been trying to avoid thinking too much about Bling – they are a really serious magazine in Korea, and working for them has a certain ‘too good to be true’ feel to it sometimes. Their position in Seoul was immediately obvious – access all areas press passes; our own tent full of alcohol to enjoy the night with and a level of respect from the Korean staff that makes you wonder if they realize they’re taking on a collection of ‘talented’ amateurs who managed to put together a reasonably well written expat magazine. I’m thrilled.

After Saturday night Bling no longer has that air of ‘too good to be true’ about it: it’s still stunningly good, just undeniably true! I spent most of the evening an absolute bundle of nerves. The high prospect of having an interview with Pendulum –who are possibly my favorite non-rock band of all time, and currently have the biggest number of plays on my iTunes – turned my legs to Jelly. I don’t think it’s fame that’s intimidating, just the thought that my musical knowledge might fall short of what they expect.

The festival was to some extent a washout – torrential rain limited the attendance to only a couple of thousand, who were mostly suitably drunk to ignore the rain and dance like fools down the front. We enjoyed a few nerve calming beers in our alcohol tent, took some amusing pictures in front of the plasma screens, and generally tried to forget that the ‘big time’ was only a matter of hours away. Then all of a sudden it got a whole lot scarier.

Julian, my producer and agent (or pimp, as he likes to call it) got off his mobile with a slightly worried look on his face. ‘Come with me’ he says. Now I’m worried too. ‘Why?’ ‘We’re going to interview Blank and Jones’. Now this is a whole different prospect. Whilst I could probably name all of Pendulums singles in order, all I know about Blank and Jones is that they play trance music, and at a frighteningly high level (top 5 DJs in the world for several years). ‘Erm, ok, tell me something about them!’ ‘There isn’t time, just do it!’ Ok.

Jessica- another new Bling writer – and I decide to tag team it, that way if we go blank and can’t think of anything we can cover each other’s backs. We head backstage, settle ourselves in a tent that must contain at least $50,000 worth of computer equipment, and frantically try to think of suitably generic questions that won’t make us look like fools. After about thirty seconds two extremely stern looking Germans walk in, and we’re go. Blank and Jones, fortunately, are not quite as stern as they look. 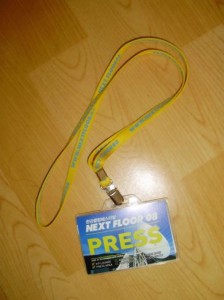 After an assortment of questions on musical styling’s, the problems with the modern music industry, getting messed up on tour and the Euro 2008 final (I neglect to mention I’m rooting for the Spanish), we snap a few photos and wish them luck. Our first encounter, apparently, has impressed the Bling staff. We breath a sigh of relief, and resolve to tag team interviews from now on for safety-net purposes.

It’s hard to enjoy a festival the same way when you’re ‘working’ and therefore have to maintain a capacity for completely clear and coherent thought. Or, to put it in English, not drink too much. Festivals, clearly, are not designed to be enjoyed sober.

After soaking up a bit of ‘Hybrid’, and watching the Germans perform from somewhere near the back, it’s time for Pendulum. It turns out only on of the band – Paul – is playing a DJ set, which is far less intimidating. I breath a little easier. The management, however, are being far more difficult. Five minutes before the interview they decide they want ‘all the questions written out in advance’… so that would be every question of a twenty minute interview, would it? I hope they he plans on elaborating. A lot. By the time we actually make it backstage and settle back into our computer-warehouse tent I feel so pressured I probably look like exactly what I am – an amateur doing about my fourth interview ever. To make matters worse, everyone with a backstage pass has decided to come and listen in. Gulp. At least the ‘written question’ idea is dropped. At this point I’m just extremely glad I’m a Pendulum addict and no the band backwards – maybe I can impress him with my knowledge.

Paul is not what you would expect. None of the arrogance that Drum and Bass artists are so known for, he comes across as a typical rocker. The twenty minute interview – which is also being photographed for use in the magazine – goes off relatively hitch free after we win Paul round by making our knowledge of the band clear from that start. Interview technique 101 passed! I actually found I settled into the role relatively easily, I’m feeling comfortable after 5 minutes and positively friendly after 10. We talk freely about everything from their most famous video (a fat man dancing very amusingly to one of their tracks) to what ‘didn’t’ happen in Thailand the night before (I had to make a full interview script from my dictaphone recording for the magazine – also blogged, check it out).

Talk about relief. In fact we get on so well with Paul that we’re soon drinking together, and he invites us to stand at the back of the stage during his performance. Awesome! About ten minutes after the interview he high-fives us as he walks onto stage, receives and absolutely rapturous welcome from 2000 odd extremely inebriated fans, and were under way. The view from the stage is fantastic, but down the front the dancing is so intense that we can’t resist the call for long.

One of the scariest, but also happiest days ever ends with the new foreign contingent of Bling dancing in the pouring rain, whilst passing round bottles of neat vodka. Best of all, Pendulum are totally stunning; Nanji park was in serious danger of sinking into the Han River at about 3am on Sunday morning. There’s a long way to go to truly being a pro, but on Saturday, at least for a few hours, it felt like I’d made it. Absolutely unreal.