I’m not much of an art man. In fact, if I’m brutally honest, I look at a fair few pieces that fall into the modern area of art and – in a way that would no doubt irritate any true art lover – happily dismiss them as being either pointless or not involving any particular array of talent. Whatever story falls behind those one-colour canvasses and images that look like a paint fight, I maintain that they fail to convey any thought process whatsoever. Still, I can appreciate beauty, and The Met has it in abundance.

Rather than the art, though, what really impressed me was the way things were done. Every room was adapted to theme. The Egyptian area, for example, was not only display cabinets with hieroglyph walls and a group of sarcophagus (yeah, I have no idea what the plural of that is), but also an entire sandstone temple with a moat, too. The suits of armour are presented in rooms draped in the colours of their armies, and the modern section (which had a couple of really fantastic Dali paintings) is clean cut and white.

The standard in terms of names is incredible, of course, and we saw some truly amazing stuff (Dali, the better end of Warhol, Picasso and the gorgeous aging European statues), and some really big names that I wasn’t all that bothered about (Monet and Van Gogh in particular did very little for me, but still, it’s nice to have seen them). Even with only a few seconds on most of the paintings, I doubt we got around more than 10-15% of the place in a morning. 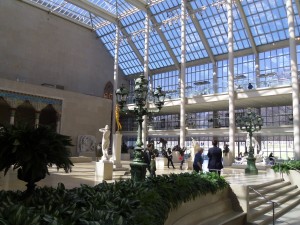 Time Square seems to fall at totally the opposite extreme. I immediately loved it – it’s so glaring, a perfect demonstration of capitalism taken to a ridiculous extreme, with every advert competing with every other for brightness and eye-catching qualities. Put a black and white image in the middle of the thing and you’d soon stand out as being fantastically different, but instead we have the bright yellow of Kodak, the glaring pink and baby blue of the Mamma Mia musical and the flashing images of every other brand that can afford it. Which probably leaves you asking why I liked it…

Basically, it seems a perfect demonstration of what America is: it’s over the top, a totally sensory overload and makes now allowance whatsoever for balance or subtlety. The shops are all on advertising overload, too. Being flagship stores, they’re not so interested in selling, seemingly (though they do, in huge quantities), more in the image that the thousands if pictures taken every day present (as you’ll see from the attached, I found it extremely difficult not to join in.

The chocolate stores at one end particularly took me – the M&M store had huge great columns of any and every colour and loads of flavours that you can’t buy anywhere else, as well as M&M branded everything… Christmas decorations (even now), t-shirts with M&M faces, mugs, cups full of chocolate and even a machine that determined your ideal colour based on your mood. Or claimed to. Toys R Us was pretty special, too, with a big wheel in the lobby, lego landmarks and a T-Rex the size of a car in various sections. It’s not a place that you’d want to hang around for too long (being honest, it’s probably damage your eyes), but it’s quite an experience. 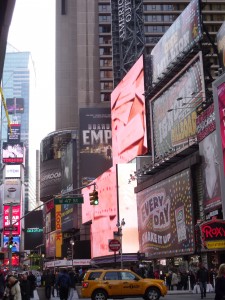 Being a Saturday (and having bailed on our Friday night out with the jetlag still hurting (I watched the relentless advertising attached to Fox News debates – comic gold, even in the horribly telling one whether a blatantly racist school football incident was actually racist –  and the college basketball) we decided to make a night of things. I’d managed to wrangle press passes for Dublin comedy hip-hop pairing The Rubberbandits show in the Lower East Side (they’re on their way to SXSW Music Festival and stopping off for a night in New York on the way), so we started there, too, just around the corner, where Belfast’s theatrical folk pianist Duke Special was also in town. Duke played to perhaps twenty people, but his interpretations of snapshot photographs and glances at the heart were gorgeous.

The entire night turned out to be great, in fact. The Rockwood Music Hall was one of the most atmospheric spots I’ve ever been lucky enough to catch shows in, and a local regular called Jeff Taylor, who mixed beat boxing, whistling and hip-hop asides with swirly, atmospheric indie particularly impressed us, too. The Rubberbandits, down the front at least, were a little like a return to Dublin. The first few rows went nuts to their ridiculous brand of urban musical comedy, while the locals stood back and looked bemused at their satires on taking care of six year old boys, spasticated birds, racial harmony (cough) and Ice Cube’s friskiness. The Mercury Lounge, where they played, was about the size of Whelans but far messier, and by the end we were quite worse for wear, having missed The Minutes in favour of Jeff Taylor (The Minutes are around all the time in Dublin, so it seemed a fair swap).

The New York subway runs 24 hours, and at night 2nd Avenue Station turns (or at least this time it did) into some strange kind subway rave, with steel drums and dancing while waiting for the minimal-level subway service to turn up. Epic night, New York nightlife certainly isn’t dull. I’d happily spend night after night in the free-in Rockwood Music Hall, which has two rooms and 8-9 bands in each room per night, and turns into a bit of a sweatbox by only 9 or 10 in the evening.

The Rubberbandits, in a hugely different time zone, must have been delighted with their raucous, sing-it-back audience.