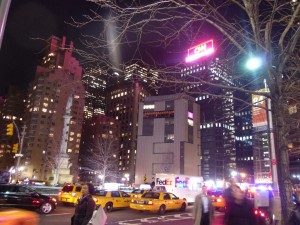 I was technically in the US for seven hours before the plane actually touched down. Dublin has this ludicrous ‘pre-clearance’ system for American fights, which involved the US immigration officers being based in Ireland and us doing two security checks inside the same airport, both checking entirely the same thing. They asked us our jobs; sadly we weren’t quite quick-witted enough to decide to be beggars, gypsies, rocket scientists or gynaecologists. You just don’t expect these things, and at the time we found it really bizarre. It’s all very well applying security in your own country, but imagine a system where every country had the same requirements? Please proceed to Cape Verde’s pre-departure checks before boarding you flight… the airport would be bigger than the city itself. We really didn’t need more reminders of why American self-importance gets our backs up at quite the moment it arrived. Still, it saved queuing at the other end.

New York, it has to be said is pretty breath taking straight off the bat. The area around JFK was like an endless line of housing repetition, a reminder of the intro song to ‘Weeds’, with dozens of different singers rehashing the same song about how suburban culture has become so mundanely similar. We made our way to our hotel on the Upper West side via a few incidents involving subway gates and suitcases (they’re not designed to fit through, I swear, but there’s no way we were going to pay for a taxi when there was a far cheaper, almost direct subway), and were quickly overwhelmed by the city. It’s not as manically busy as we expected, at least not around where we’re staying, but the nearest thing I’ve seen to the domineering height of the place is in Seoul, and there it exists only in far more sporadic patches. You could pick very nearly every building in some parts of the city and they’d all dwarf anything in Dublin. You know what’s coming, but it’s hard to get used to how ant-like New York makes you feel until you’re surrounded by floor after floor of monster towers. Even the cars, true to the stereotype, seem incapable of adjusting to fit to inner-city roads: they’re like barges with wheels. 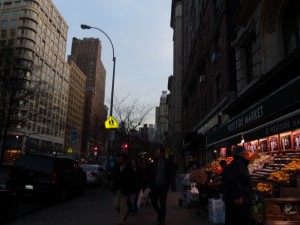 We got in to the hotel at 4 in the afternoon New York time, which is 9pm Irish time, but we still managed to drag ourselves out in to the city just a little. We walked for a few dozen blocks along Broadway (which isn’t just a theatre district, but stretches along the entire Western Manhattan), stopping off for Helena to ogle happily at Century 21 (a discount designer clothes store), to take in the various soaring skyscrapers and to wonder off to get a quick glance of Central Park. The city’s quieter than I expected, but perhaps we just haven’t found those manic corners yet.

Energy levels were never going to last long tonight, but we did managed to track down a gorgeous Cuban restaurant on Broadway, and had some food we just couldn’t have found in Ireland against a backdrop of jingly Spanish guitar and washed down with some very overpriced red wine. But that’s what you get for eating on Broadway. Lots to explore tomorrow, and we’ve already booked tickets to see the New Jersey Nets NBA basketball on our last night, too. I already have a feeling that six days in New York will be nothing like enough, there’s just such a massive number of things to see.