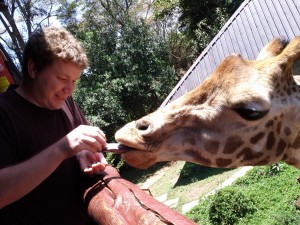 In a way, we picked an awful time to rock up in Nairobi. New Year sees everything close to a standstill, and while the night itself is fairly lively, our two days finishing up our trip in the city – the 1st and the 2nd of January – are both public holidays, and with most things shut down, there was precious little to do. We flew in from Zanzibar, arriving just before 10pm on New Year’s Eve on what – after our earlier experiences – was a fantastically trouble free flight. We even made it to the hotel and the heart of the city before eleven, just in time to scope out a fun-looking bar opposite the hotel, grab a shower after the Zanzibar heat (40 degrees in mid-day, easily – intense), and stumble back out to drink some Kenyan Guinness (6.5%, and more like Newcastle Brown Ale. Sacrilegious as Dublin locals might find this, I prefer the Kenyan form, which isn’t in the least bit creamy).

This’ll definitely go down as one of our odder New Years. The bar we’d picked out turned out to be a well-disguised sports bar, but for New Year, they blasted 90s hip-hop over the stereo to an extremely young crowd. We were definitely the only non-locals there, going pretty much unnoticed amongst the dance-offs and fondling that seemed to dominate the place, and saw New Year in hanging out on the first floor balcony watching the cars cruise past blasting on their horns, people hanging from the windows and off the boots. After a few more beers, we retreated the twenty-four hour hotel restaurant, ordered some late-night junk food that took forever to come, and watched a brilliantly comic piece of Kenyan television called ‘the totally sold out concert’, a multi-genre extravaganza that featured Maasai tribesmen performing some frantic hip-hop and finished up with a God-fearing love in that seemed totally out of place. Kenyans certainly are extremely religious types, though they’re equally obsessed with football. That I can relate to. 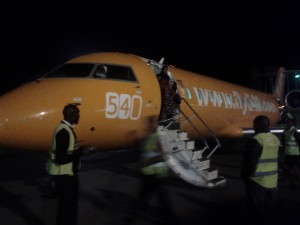 We had booked a nice hotel – by far our most expensive of the trip – in the hope of having a really relaxing close to the holiday, but it turned out to be a bit of a rip off. Not an awful hotel, but a tiny, shabby room that wasn’t worth anything like the extra we paid. Still, it pushed us out into the city a little but more. When we got to walking around, we discovered that on the 1st, about the only place that was open the following morning was the supermarket. Which actually worked out well: I’m strangely fascinated by unfamiliar supermarkets, and we splurged on bargain blankets, camping stoves and a load of other unrelated accessories that came in at less than 30 quid for the lot. Drinking milk from those little plastic carrier bags hasn’t lost its appeal, either. Other than the supermarkets, a couple of places to tuck into some ice coffee, and a bit of football seemed a little bit of a waste of a day in Nairobi, but there really wasn’t a lot else to do, apart from watch the dressed-up families walk around the city after the celebrations.

On the second, things weren’t really much different, so we decided to gamble on a tourist attractions being open, and headed for the Giraffe Rehabilitation Centre. We got lucky, and though the place was small (at least the part humans can access), we arrived just in time for feeding, and spent a really happy half hour standing at the top of a small giraffe-height building and feeding the giraffes nut pellets from the balcony. They’re quite intimidatingly huge, but also extremely tame, and lick the entire hand with their huge black tongues to take in all the taste. Of course, the taxi driver who took us down turned the entire journey into one long sales pitch for anywhere else he could possibly thing of that would be far enough away in a taxi to make him some money, as we’ve found tends to be the case here, but the experience was definitely worth the effort. Attempts to find an open cinema, museum… or anything other than a restaurant or coffee shop were less successful, so Nairobi turned into on big, lazy come-down at the end of a trip that’s had massive highs and lows.

I’m going to leave my customary trip-closing overview until the entire experience has had a few days to sink in, but I already know that I have hugely mixed feelings on our East African experiences: I’ve been surprised by how expensive it’s turned out to be (and we have worked hard to keep the costs down), I’ve often been frustrated by the dreadful levels of customer service, the regular dishonesty and the hassle. Equally, though, I’ve found that the redeeming features are unforgettable: safari wasn’t my think, but it took my breath away (and was worth the food poisoning), and Zanzibar was wonderfully relaxing.

I’m typing this sat at Nairobi International waiting for the long-haul back to Dublin, and one thing’s for certain: the weather’s going to be hugely difficult to deal with back home!