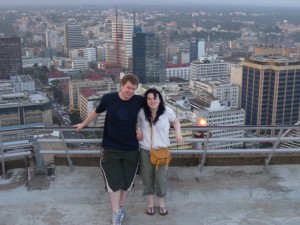 So, we got our bags back, and with them our anti-malaria drugs and all our clothes. Sigh of relief. I’m fast learning that the best way to deal with anything in Africa is to allow a huge amount of time and be unfailingly patient and polite. It gets a bit much sometimes: showing the utmost respect to the representative of a company that had delivered our luggage two days late and required us to come to the airport to pick it up (we were reliably informed locally that if we just waited, it could be a large chunk of our holiday) isn’t easy, but at least things were sorted.

That meant a couple of days longer in Nairobi than we really would have liked, but then again it turns out we actually like the city. I say that with an element of surprise because Kenya’s capital has a shocking reputation, but while we spend almost all of our two days either sorting our safari or chasing up luggage (see what I mean about the patience?), it did have some lovely features. The first thing I did every morning was stumble over to the balcony window and stare down at the orange dust along the grotty Ngara Road (it just seemed so stereotypical African), and after a brief stroll into the centre with the safari guide we eventually took on after a bit of shopping around, we got the confidence up to walk around the place ourselves. Though not at the dead of night, we’d heard just a little too much to try that.

Once we were away from the safari operators (and a two hour return trip to the airport plus over an hour at the bank), we got stuck into a really minimal amount of sightseeing. The Kenyatta Conference centre in the heart of the city towers above most of the rest of the buildings, and we watched the sun edge towards the horizon again the hills, whilst hearing all about the history (Brits doing ourselves proud again… not). We also walked the streets, got a sense of the place, and discovered that at its heart, Nairobi is a business city not unlike a lot of others. A charismatic one, true,  but also one that moves at a manic pace, clutters up around 6pm with truly horrendous traffic and, slightly depressingly, gets extremely busy around Christmas. A quick matatu (mini bus) ride from the hotel to the heart gave us a great glance, while singing Santas in the supermarket doorways seemed surreal in the heat. 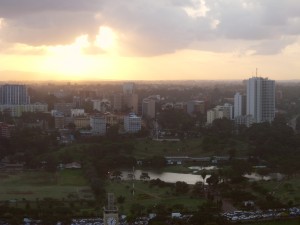 Service in Nairobi proved to be an odd thing, a feeling that’s extended into Tanzania, too. While some places have been outstanding, probably more have been more than a bit shaky. When paying on bank cards, we’ve found both the businesses we’ve used have tried to take us for idiots on the exchange rate, which is disappointing (I’m a bit too experienced as a traveller to get taken for a ride like that, as is Helena, but it’s more the principle). The restaurants can be comic: either wonderfully friendly, or so surly that you wonder if you’re better off taking your money elsewhere. A couple of the waitresses in particular – who we were being perfectly polite too, for what it’s worth – saw it as an effort to take an order, or to say more than a word or two to identify the bathroom. Charming. Touts and waitresses aside, though, people seem outstandingly friendly.

As you probably gathered from the above, we’ve opted to spend a really quite minimal amount of time in Kenya, and instead head over the border an get stuck into our two first-choice safari destinations, Ngoro Ngoro Crater and The Serengeti National Park. With that all pre-booked, we travelled south today from Nairobi to the sizable town (about the same as Dublin) of Arusha, in north Tanzania. Again, it has some charming features, some really loveable sides and some things that make you want to tear your hair out. The touts hassle level and dishonest pricing has left quite a bad taste in my mouth, but then again, it wouldn’t be a less-developed travel experience without things like this. Helena’s far more adept at haggling than me, so she tends to take charge.

The drive to Arusha was our first glance at your stereotypical Africa: gorgeous, vast rolling plains backed with craggy mountains, straw huts and massive herds of cows. The bus powered through dusty streets, surrounding us with orange dust on the messier stretches, while the quieter roads were a great chance to glance at village life, imagine the lifestyle and drift away. Looking out of the window was like an African education, the kind of thing that totally destroyed any preconceptions. Amazing stuff.

Arusha’s quite run down in the centre, but has some incredible scenes in the huge fruit and vegetable market, and some nice contrasts with companies like Vodafone and Samsung sat next to tiny local market stalls. The streets are crammed with people selling BBQ’d corn, though you can tell it’s a bit of a tourist hub: the souvenirs are in overload, too. If it wasn’t for the touts, who even follow you right into the hotel and wait outside every shop for you, I dare say it would be a lot of fun, but they do tend to ruin things like this. Those street pests aside, the atmosphere is bordering on languid: the pace of life in Tanzania really does crawl along, a loveably charming side to the country that I genuinely wish I had more of a chance to enjoy. If you happen to be of African descent, I’d imagine through – for want of a better explanation – blending in, you’d have an absolute whale of time. As it is, we’re not fussed about seeing much of Arusha, and looking forward to moving on tomorrow, for what’ll no doubt be the highlight of the trip: three nights and four days camping in some of Africa’s top national parks. Bring it on!