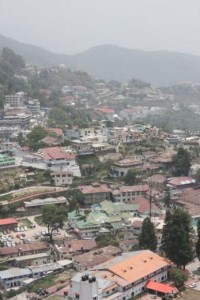 When we arrived in Mussoorie to the news of a city wide water shortage and having to wash with buckets of freezing cold water even in a fairly nice hotel, there was a little bit of ‘here we go again’ about it. Mussoorie, though, must be one of the least Indian cities in India. We’ve spent most of out time walking lazily around the main road, ‘The Mall’, playing on the games machines, shooting balloons with air rifles and looking at the panoramic views down to Dehra Dun.

We took a horse ride around the back end of Mussoorie, along ‘camel back road’. It’s named ‘camel back’ as there’s a small rock over the horizon on one corner that looks oddly like a camel, though you’d have to be paying serious attention to spot it. There are views down into the valleys, away from Dehra Dun. The other side to the city there’s nothing but mountains, slicing across the horizon from both sides. It’s been a little too cloudy to see all the way to snow capped peaks most days, but it’s a fantastic view anyway.

My horse was a (slightly too small) white thing, one that plodded slowly along a little too close to the cliff edge for comfort (especially as I felt I was hanging on to the saddle without too much grip) and munched on chapattis. Helena’s was a much bigger brown beast, which made us look like a bit of an odd pair. She looked far more stable than me. We walked around the ledge for a few kilometers, looking at the road side temples and ramshackle stalls that seemed to hover over the cliff edge as much as the horizon.

It’s cool enough here to use a blanket at night, and the holidaying Indian population up from the plains walk around in the evenings like we would around town in late autumn. Mussoorie has a different nighttime vibe to the rest of India, with streets far more crowded than during the day and a whole load of salesmen who flog things like oversized balloons and sugary Indian sweets. 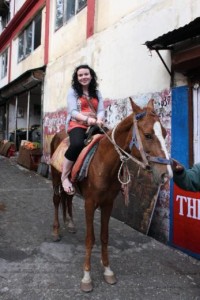 A huge hill overlooks Mussoorie, 500 metres above the main roads in between the two more bustling ends of The Mall. At the top the views are even more impressive, with a whole load of restaurants perched on the edge of the cliff edges that have views for dozens of miles even in the cloud. There’s also a load more hand operated fairground games, like small carousels and hand operated oversized rocking horses. You can dress up in more local dress (see picture) and take photographs in front of the mountains.

The international cricket is incredibly popular here, and we’ve watched quite a lot of the twenty over tournament in the evenings. Helena really likes it, and understands what’s going on in a pretty complex way now. I’m very impressed! It’s been quite entertaining answering the locals very predictable question (which country? I swear, at least 50 times a day!) since England knocked out India a couple of days back.

Most of all though, we’ve just been making the most of our time together before Helena goes home. Back to Delhi tomorrow, and she flies early on Thursday. I’m going to miss her like crazy. 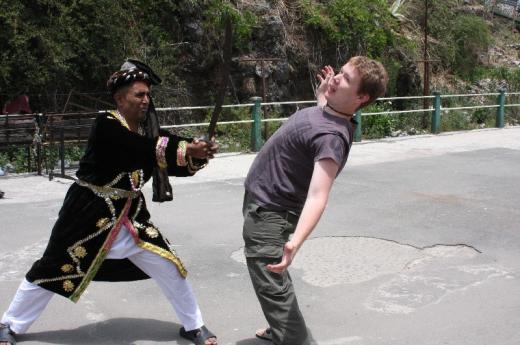