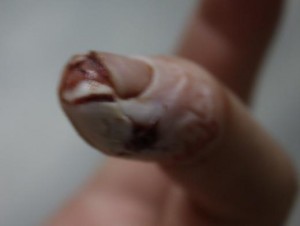 Sounds like a controversial new blog section doesn’t it! If you’ve stumbled on here without reading the last couple of entries, take my word for it, this is very literal.

Just to save anyone reading back, I shredded my finger extremely painfully in a fan in Calcutta about three days ago. Before today, I’d had my finger wrapped extremely tightly in three of four plasters, and it had almost stopped hurting (only a gentle throb), so I assumed it wasn’t too bad. A combination of taking the plasters off and seeing a real mess (see picture, which doesn’t really cover just how bad it is) and Helena’s persuasion got me into the doctors.

I couldn’t watch while he checked, and whatever he was doing to it was extremely painful. The doctor eventually told me that the fan must have hit my finger at least six times from the way my finger’s cut, and that if I hadn’t gone to the doctors there would have been very serious problems in a few more days (possibly even leading to having to have it amputated down to the first joint).

The cuts are too close together for stitches, so he cleaned it very thoroughly (and painfully) and basically glued my finger back together. The glue will eventually dissolve into my system. I have to keep it in the open air and avoid touching anything with it (to wrap it would cause problems with moisture related infections), and absolutely cover it in antiseptic several times a day. It’s very unlikely I’ll have any serious long-term problems with it, though it’s also unlikely it will ever be the perfect shape at the end again, or that the scars will ever fade completely. At least it’s only my left middle finger!

Just to top things off, it smells really bad (though better now than it did when I unwrapped it)