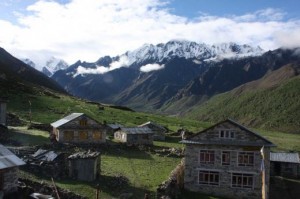 ‘Today, Syebru Besi’ was my morning greeting to Sang Ram, to which he laughed hysterically and showed me the distance on the map while we ate breakfast on a hotel rooftop and gazed at the clearest view of the whole trek. ‘No problem’ I said, and he just laughed again. The route back at Langtang is either identical or extremely similar to the way out, so I was deadly serious: we’ve seen it, why not just walk all the way out? By lunchtime we had rushed our way 20kms downhill, out of the meadows and into the jungles. Sang Ram had started muttering ‘crazy walk, crazy walk’ to himself, but seemed enthused our pace, and was suddenly taking me seriously.

Everything was fine until Bamboo. 7 hours of downhill walking, in which we’d covered more than two days of uphill, and found ourselves a quiet spot for a sugary drink and a huge bowl of noodles. ‘Mountain weather change very quickly’ Sang Ram had been telling me all week, but I’d yet to see it; Langtang seemed to be surprisingly meteologically stable. Half an hour after Bamboo, a massive storm broke, the riverside paths almost became part of the river in places and leaches started to throw themselves from trees towards us as we walked past. I deflected the first one with a swipe of the hand and a look of such total shock Sang Ram laughed hysterically for a full five minutes. I never new leaches could do that.

Suddenly, the challenging march down hill had become extremely strenuous, and more than a little dangerous on the muddy riverside slopes. I was going down slopes at a ludicrously slow speed, sliding almost every step and planting myself deep into the mud with my bamboo stick. 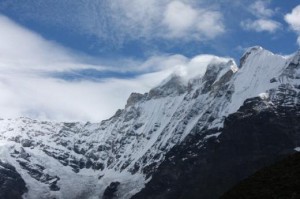 By the time we stumbled back to the road at Sybru Besi, we were both so exhausted we threw off our shoes and rain coats and slept for two hours before managing to walk to the lodge’s dining room for dinner. We bought bus tickets back to Kathmandu, drank a celebratory beer and slept again before the sun went down. The same downhill walk regularly takes two days, sometimes three, and even the locals thought we were a tad mad, but I was glad to be back down. According to the distances given by a local trekking map, we’d walked a few hundred metres more than a marathon the day after a big peak climb. I can honestly say the exhaustion probably topped my post-marathon tiredness.

My shoes are probably still outside a hotel room in Syebru Besi. They were a state, but the main reason I mention this is the day 6 uphill walk to Dunche, a walk we shouldn’t have even been making. The bus the Kathmandu is supposed to stop in Syebru Besi, but the overnight rain had collapsed the mountain road. After waking up early for what should have been a two-minute crawl to the bus, we found ourselves trekking uphill for more than 500 metres, up steep zigzag pathways away from the collapsed road. I did the walk in flip-flops, which Sang Ram insisted on wetting regularly to wash off the leaches. The wet rubber slid around on my feet, and threw me backwards almost as much as forwards. After two days of intense walking, the walk to Dunche was almost more than I could take. After three hours speed walking, we caught the last bus to Kathmandu by perhaps 3 minutes. 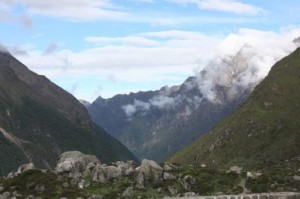 Half way back to the capital we came across another road collapse. The bus stopped 50 metres short, while workman threw mud and stones into a hole in the road so big that only a motorbike could possibly pass. We waited for an hour, before watching nervously from the other side of the hole while the bus drive drove an empty bus gently over an incredibly delicate looking patchwork road repair. It creeked, but held.

A week in the mountains, and big city civilization seems so loud and vibrant it’s almost intimidating. The first night I booked a flight, had a conversation with Helena that I don’t even remember through exhaustion, and shot of a few emails to let people know I was alive. It felt more necessary to me that perhaps it was.

I’ve never been so tired in my entire life, but Langtang was absolutely unforgettable.