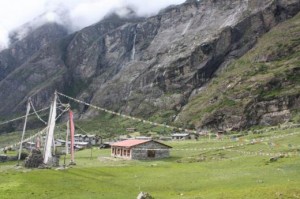 Bamboo in the morning is incredible. An overnight storm gave a perfect view of the mountains in the distance while we ate Sherpa bread with local honey on the balcony. Just after Bamboo a huge waterfall whips the river into a total frenzy, with a very wet crossing right over the top of it. The narrow trail here is covered in swirling question marks and labeled the ‘heavenly path’, a deafening riverside walk that leaves you shouting in each other’s ears to communicate.

This is the steepest part of the trail, a seemingly endless uphill that has me sliding down a step for every two forward. The path is at it’s thinnest, and the rocks used to make it are slowly edging their way down the mountainside.

After Lama Hotel the jungle starts to disappear, replaced by a open meadows, bushes and the occasional bit of farmland, all surrounded by huge cliffs and dramatic waterfalls that have been cleverly diverted across the land for irrigation. By this point Sang Ram is rambling regularly about my ‘good walking’ and making some amusing comparisons to some of his American clients, who he says ‘never see hill before’, and can take a whole day to drift from one village to another. National stereotypes cross borders it seems! 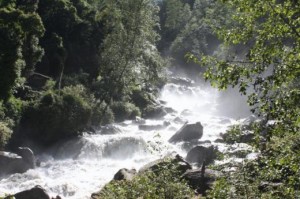 After Ghore Tabela (and lunch), the path flattens out across the fields, and the Langtang mountain range finally comes into view through the occasional gap in the clouds. The tiny streams are used to power prayer wheels, which have tiny propellers turning them with a clanging noise, sending an endless flow of Buddhist prayers up to heaven.

Langtang is an incredibly beautiful village, spread out across a few hundred flat metres between the steep cliff face and the river valley. The footpaths through the village are split in two by stone walls with endless messages of good luck to Buddha carved into the side; everyone walks around the left hand side for good luck. The houses each have a big space of open field between them, and the cold air makes you feel sleepy. The main river has disappeared down a creek, and Langtang town is incredibly quiet, quiet enough to make you walk around on tiptoes trying not to disturb the locals. At night the only sound is the gentle clanging of cows and goats bells. Prayer flags flutter in the breeze between the gompas in town, offering a string of colour to the intense green.

The odd foods don’t stop even at the top of the mountain, though the prices nearly double as everything has to be either grown locally or carried up by sherpas. Snickers momo was an odd (but tasty) mix, as was ccchang (local ‘wine’). Which was bitty and white and tasted similar to Korean maekolli, though with even more of a bitter aftertaste.

After Bamboo, Langtang was surprisingly busy, with several other hikers including a guy from Seoul crashing overnight. I spent an evening talking about all the old sites, and slept when the sun went down, which seems to be the way it works out when trekking.

To be continued… (too much Langtang to do in one go!)