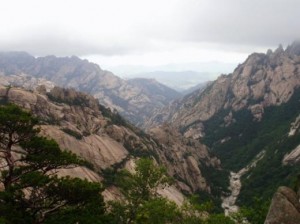 North Korean breakfast in Kumgangsan consists of Rice, Kimchi and Toast and Jam. So pretty much the same as any old restaurant in the south, then. At times our frustration at the falseness of the whole experience was starting to get at us, but Kumgangsan had plenty more to offer. A 6am wake up call wasnt ideal after the Soju antics of the previous night, but a clear morning and the chance to see what all the fuss was about made it worthwhile.

Hike number two was a longer but easier slog to a huge waterfall and then to a peak to get an impressive view back over the whole mountain range. With the fog lifted, a first real hint of North Korea propaganda came into view: huge cascades of texts on flat cliff faces; quotes form Kim Jong Il written into the side of waterfalls and ridiculously well built modern facilities all looked suspiciously like they had sprung up around the same time as the local tourist industry. But then any propagandas more entertaining then none at all.

The view from the top was stunning: a real straight down birds eye view over the numerous pools above the waterfall and craggy mountains as far as the eye could see. Well worth the hike, which at times felt like walking up a three hundred-story building (Koreans dont believe in the natural route up a mountain, and tend to build steps the whole way up everything).

After the hike it was obvious what we needed: a spa. Kumgangsan is famous for its spa treatments, and at $12 a person its almost worth getting naked for. Personally Ill never feel completely comfortable walking around naked in front of hundreds of old men who all find it fascinating to see their first ever white body, but then I doubt many do. The hot springs were spectacular though, the kind of hot and cold mix that leave you in a relaxed daze for hours afterwards. 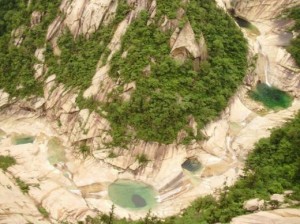 Being the North Korean Disneyland, Kumgangsan even has its own duty free shop. Youre more likely to find something made in Hawaii than North Korea, though there was a small selection of seeds and odd looking alcohol animal-infused alcohol that even my adventurous palette was not willing to pay out for. Theres a strong reunification theme to the area. Theres a stand giving out free reunification of Korea flags and the North or the South are not mentioned anywhere except the border. The fact that there is little public or political call for reunification in the South  its simply a formally stated and likely unretractable part of the constitution – seems to have escaped Hyundai.

Getting back in to Seoul around midnight  via a quick break at a rest stop that seemed to be populated more by ceramic penises than anything edible  didnt feel quite like it did after Gaesong. Not a return from an entirely different planet, simply a return home after a normal weekend away. It has to be said that Kumgangsan  at least as a North Korean experience  is extremely disappointing. Thats not to say it isnt worth going, there are a number of large portraits of the dictator-Kims to ogle; a couple of impressive attractions and some truly stunning scenery. Its just about as cultural as a theme park, and thats the overwhelming memory it leaves. Thanks to Matt, Marielle and Ruth for making it a pretty legendary weekend anyway. Im going to have to go back to Gaesong to get my Communist culture fix before leaving Korea. No regrets, the photos are stunning.