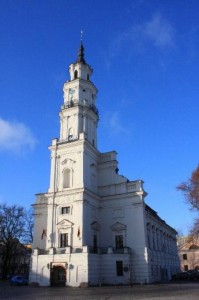 Someone clearly got very confused when they built Kaunas. A quick flick through the tourist lit. reveals what has to be one of Europe’s largest number of nice looking churches and a beautiful white stone town hall. There’s a fairy-tale like cylindrical castle with Rapunzel-esque tower and a pair of picturesque icy rivers flowing gently into each other right at the centre. Beautiful. Then there are the city centre streets. Also beautiful, but in a rustic, probably need some kind of external support if they’re going to stand up much longer kind of way. Some of the buildings are so dark and brooding you feel a little like the Berlin wall hasn’t fallen down yet, and the dark winding alleyways fill with gangster types speaking in deep, threatening voices after about 8 in the evening. They have disguised some of the foreboding with a city wide coat of Mediterranean style pastel, but when you throw in the devil museum, it’s not quite enough to disguise the slight sense of ‘fairytale gone wrong’ that surrounds the city.

Lithuania is in the EU, but – fortunately for us – has not yet undergone the across the board price increases ushered in along with the Euro. The strong exchange rate means a great little four star hotel clocks in at just over 100 pounds for the two of us for two nights. Bargain.  Arriving late on a Friday night works perfectly, giving a full two days in the city. We welcome ourselves to Lithuania with a quick walk around the beautiful nearby square in the freezing cold and rushing wind, followed by good dose of local cuisine. I’d never eaten boar before – it tastes like a richer pork, and goes perfectly with the mushroom, rye bread and bottle of white wine. I’m loving the Baltics so far!

There was only one place we were ever going to head for first: that Devil Museum. I hope choosing it over the huge number of churches isn’t too much of an indication of our collective personality, but Satan worshipping is just more interesting than halos and crosses. Sorry guys! 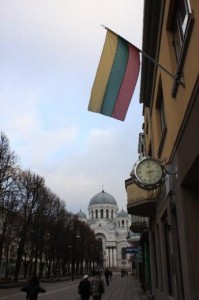 The devil museum is in fact a display of the personal collection of a (clearly slightly messed up) local artist. The statues, drawings and cuddly toys (presumably a later addition) are presented in a fairly tame way (it could be far more scary), but the back lighting and slightly terrifying staff certainly create an atmosphere. The artist has managed to import sacrilegious images from all corners of the globe, and the Brazilian masks and nasty looking red brick statue are particularly noteworthy.

Right next door is a small statue garden, somehow more impressive for the colorful graffiti it’s covered in, but in Lithuania in winter you don’t spend long outdoors, and we’re soon heading for lunch and some much needed heat. Kaunas city centre is beautiful, but at minus two plus wind chill, not really very bearable.

The rest of the afternoon takes us in a loop around the city, taking in that whole host of churches (beautiful, but a bit same old after a while) and the local shopping centre (Helena!) before a much-needed pre-dinner nap.

This is my 6th country in the last two months, I feel it’s excusable!

Evening and day three to follows!