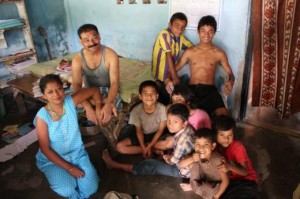 Jaigon’s a pretty typical, non-touristy Indian town. There are two large, half-tarmaced streets with some extremely ramshackle hotels, a Bollywood cinema and frantic streets. So why am I here? Well, about ten metres behind my city centre hotel is a big mountain, empty mountain. And that mountain is another country: Bhutan.

Jaigon is actually split in half by the border, but the other half has so far been inaccessible to me. Bhutan change their mind frequently about the status of the border here – does it open into a ‘free zone’ which everyone can go into for a day without paying, or do you need a $200 dollar/ day visa just walk through the elaborate pearly gates and out of the chaos at the other end of town. Two days worth of trying, and so far I’ve been stuck with the extremely expensive option; the hotel owners have made a couple of ‘trick’ suggestions to me (not illegal, don’t worry mum!), and I’ll be checking them out tomorrow. If not, unfortunately it’s bye bye the Bhutan idea. 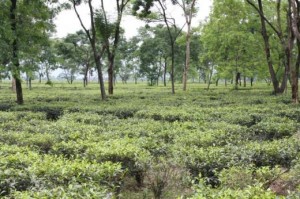 The centre of Jaigon might not be the most fun in the world, but walking around the nearby countryside is great. I spent a morning lying around in a tea plantation, the faintest hint of a cuppa wafting around me while I read my novel and soaked up the sun. The plantations go on for miles, stretching from the Bhutanese border back a full, unbroken 20kms to the next village. Who knows after that.

A couple of kilometres out of the town muddy side streets start to appear, with run down open air markets and little shacks selling sweets and tobacco. I picked one and went for a long walk. Jaigon is miles of the tourist trail, so the locals here are immeasurably nicer and less money focused. I sat in a families front room and talked for a couple of hours about life in the villages with their son, eating fruit and learning about Indian schooling. I went so close to the Bhutanese border out in the countryside that I was probably on the verge of an illegal crossing (the Indian flags on buildings had stopped and I could see the Bhutanese ones in front of me), before a local man warned me of some previous robberies and turned me back. The streets feel almost tropical, with housing plots separated by palms, huge winding trees covered in moss and paddy fields replacing the tea every so often. You could almost mistake the outskirts of Jaigon for Thailand.

Next I went to the market, and took dozens of photos of stallholders with their vegetables, which amused them no end. There were a few fruits I’ve never seen before: one that looked like a lemon, except with big spikes on the skin, and a grape-sized fruit in a thick green skin that had soft, sickly sweet white segments inside. 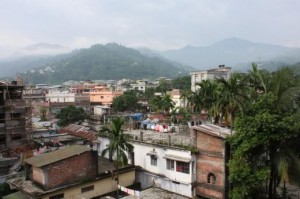 The food here is great overall, in fact. It’s a weird kind of Asian fusion mix. I’ve had Thukpa – Tibetan noodles with various vegetables and flavours, and tried a Bhutanese dish that seemed like a potato version of cauliflower cheese apart from the big green chillies that came with it. Both were excellent, and my stomach is in by far the best state it’s been in since I’ve been here.

Even if I don’t make it over the border, there’s still a good sample of Bhutanese culture here, with shops selling only Bhutanese produce, around half the people walking around in Bhutanese skirts (a little like kilts, men wear them too, though I assume with something under them!) and most people here seem to speak in both Bengali and the Bhutanese language. Bhutanese people are remarkably similar looks wise to Koreans; even the language sounds similar (so similar, in fact, that I overheard someone speaking for a few seconds and thought they were Korean, though they looked at me very oddly when I said hi!).

I’ll know tomorrow if I can get to Bhutan or not. Even if I cant, it’s been so good to relax away from the tourist trail (I’m sure Jaigon hasn’t seen a non-Asian foreigner in a while, it certainly seems like it), though I must admit the chance to make those lush looking mountains just round the corner nearly tempted me into a single day, $200 visa. Nearly, but not quite.

Finger aside (entry to follow!), things seem to be on the up. Helena even has a phone now, which has cheered me up a whole lot too. 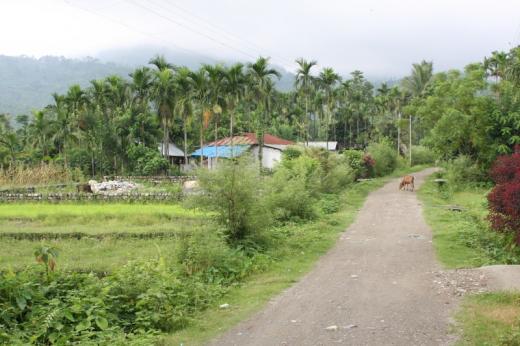