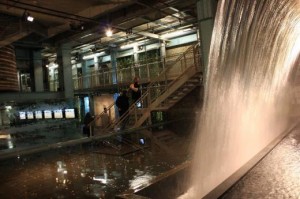 My aunt and uncle came to visit Dublin this weekend, and – contrary to all the stereotypes about relatives – I really enjoy their company (and I’m not even saying that because they read this!). It gave me a chance to see Dublin as a tourist would see it. I’m resigned to the idea that I don’t think Dublin is a good place to live, but being a good place to live and a good place to visit are nothing like the same thing (take Seoul, for example: very average place to visit, great place to live. After a while the sites – or lack of – don’t really matter). I have to admit I don’t know very much about Dublin. I guess the sites have never really grabbed me, and I’d struggle to explain the significance of O’Connell Street, or what on earth that big metal spike in the middle of the city is actually for or representing (though I’d hazard a guess at not a lot). It was good to see things from a different point of view.

We started with Temple Bar and Dublin Castle. The Castle is nice looking, but doesn’t really warrant more than five minutes glance. It’s gardens have a collection of plaques commemorating the competitors in the Irish Special Olympics (which my aunt is convinced my grandmother will be delighted to see her name on – I’m not so sure!), and a snake looping round an area of grass which seems to be mainly for children to run around. Inside there’s a huge courtyard with roman pillars, guard boxes and statues of soldiers and the scales of justice.

Temple Bar is livelier during the weekend, and has a slightly hippie edge, but it’s still one of the most obvious purely-for-the-tourist destinations you could ever come across. Which is a shame, as by all accounts it used to be great. We did find a really nice restaurant, and a homely bar for the inevitable ‘is the Guinness better than back home’ comparison. It was beautifully named too – ‘the Hairy Lemon’. Nice. The restaurant was a playfully styled Noveau Cuisine place, with pictures hung on angles, lopsided chandeliers and so many mirrors in the bathroom that after a couple of pints it would be difficult to distinguish where you’re supposed to pee from another reflection. It had great food too (thanks for dinner, guys!). 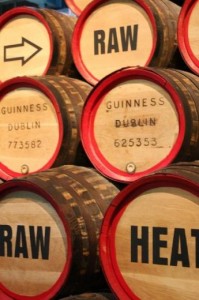 On Sunday we went to the Guinness Storehouse, which I’ve been saving for when I have someone to play the tourist with. It’s not quite the hands-on insight into brewing that I was hoping it might be, but is the most complete guide to Guinness and how it’s made you could hope to find. There are entire floors dedicated to ingredients (you can sample roasted barley), the brewing process and those infamous Guinness adverts. At the top there are tasting rooms, a ‘pour your own pint’ bar, and a bar with a view over most of the city. The inside of the building is a former warehouse, and has been redesigned into a huge pint glass that – should it be filled – would represent roughly the amount of Guinness consumed worldwide every day. It’s fair to say it looked like a pretty hefty quantity.

A couple of fun Guinness Facts I picked up:
–    There are actually three different types of Guinness: draught, foreign and one more. I have a bad memory. The differences relate to conserving the Guinness for the journey.
–    There are only four ingredients in a pint of Guinness. The master brewer is the ‘5th ingredient’.
–    2/3rds of all the barley grown in Ireland ends up in a Guinness glass.
–    Producing a Guinness barrel (old style) was an incredibly complex and skilled process, and didn’t involve any nails, screws or nuts and bolts. The whole process is on video, and it’s very impressive.
–    Around half the foreign visitors to the gravity bar weren’t even close to managing a pint of the black stuff.
–    Guinness advertising over the years gives a great appreciate for the art of advertising than most of the tat on TV these days. Not once have they resorted to ludicrous temporary ‘sales’ that only go to show how much profit they were making in the first place. The toucans, the ‘Genius’ adverts and the ‘Good things come to those who wait’ campaigns were all incredibly clever.

It was fun to see Dublin a different way for a couple of days. Perhaps I should make more effort with the tourist sites…