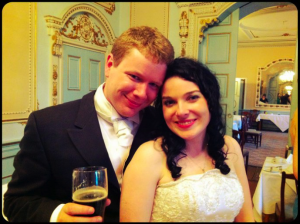 So there I was, sat on the stage in the Markree Chapel, staring down at many of the most important people in my life and trying my best not to seem nervous. Which was fine, for about the first fifteen minutes, but started to get a bit edgy after 20, and a bit more edgy after 25. It wasn’t so much that I thought Helena might be a no show – though I can’t deny that at 25 minutes late it did cross the mind once or twice – more that the registrar had pulled me aside and said she had another wedding to go to. I’m sure there was a horrible moment when I looked extremely stressed, because of it, but all was well that ended well: when the photographer, James, arrived and I knew they’d all got there.

After that, things seemed to happen really quickly. Helena’s dress – which I’d been told for the best part of six months was green – turned out to be a lot more traditional and very beautiful. Our mums lit candles, the registrar did her legal stuff, and the songs and readings flew by. Mark, the singer, was absolutely stunning. Green Day’s ‘Time Of Your Life’ in particular brought me close to tears, as did the two readings. In fact, it was pretty miraculous that I made it through the entire ceremony without crying my eyes out – it was the culmination of absolutely months of work and so emotional, particularly with the Paolo Coelho readings and very personal music. Apparently I slipped into an Irish accent for the vows – I was so nervous that I was probably imitating the sounds as well as the actual words – and we swapped rings, listened to the final song and strolled off down the aisle. 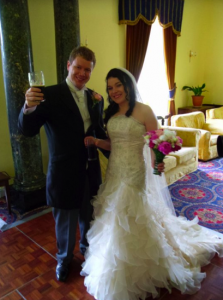 It was hard to picture the chapel before the actual day, as we’d only seen it all lit up. The dark, candlelit vibe was really romantic, I thought, though it was also essential because we weren’t allowed to show any religious symbolism at a civil ceremony. We also considered including a Buddhist reading as we met in the Buddhist temple (but never found one we liked) and initially had Leonard Cohen’s ‘Hallelujah’ as one of the songs, though it was disallowed. In hindsight, given the lyrics (which I obviously hadn’t listened to carefully enough when we first picked it), that was probably for the best.

After the ceremony, we stood outside and took the chance to say hi to everyone. The handshake line thing is one of those surreal moments where you’re meeting new people and old friends, yet don’t really have time for a chat with any of them if things are going to keep moving. By the time we got through to the reception and the fruit punch, it was a case of trying to chat to as many people as possible before dinner. Of course, we had to squeeze in the photos, too (I got them through from the photographer today, so I’ll be putting them live and taking requests from tomorrow; the photos attached to this entry are ones I’ve borrowed from a few friends), though we opted not to go too mad with them as we wanted to enjoy the day, rather than allow other things to completely take over. James has really captured the spirit of things anyhow, so it was certainly the right choice. The setting on the staircase was stunning, and there are lots of nice atmospheric action shots, too. It’s odd being the centre of attention for such a prolonged period – a little like how celebrities must feel when the paparazzi are after them – but extremely fun. A lot of people had really nice things to say about the ceremony and about us, which is both strange and really fun. Even with teaching, I usually teach one on one, so being the centre of attention is very unfamiliar. The huge pile of presents that started to stack up by the fireplace was fun, too! (Thank you so much everyone – personal thankyous will, of course, be heading over to you all in the not too distant future, now that we have a photo to send on, too).

Before long, the fruit punch and the biscuits had finished, a few of the younger crowd had started tucking in at the bar, and the epic pre-dinner group shot was taken, so we walked into dinner as ‘Mr and Mrs Hendicott’. We loved the food at Markree at the taste test, and it was great on the day, too, though under the circumstances it’s a little difficult to relax and enjoy it, especially with the dreaded speeches looming.

I have to say Dickon’s best man’s speech was absolutely outstanding. Just the right mix of marginally embarrassing and very fun, you could really tell that he does that kind of thing for a living.  For anyone who missed it, here’s a the ‘J Team’ intro in full:

Fiona was great, too (for the record – I’ll probably be in trouble for writing this – it’s me who calls Helena cuddles. Because… well, she is), and the selection of other speeches that followed on (we borrowed a Nigerian tradition, though it would probably have worked better if the mic had been stronger) brought back some nice memories. It’s odd how many of my friends haven’t been part of my life that much since I met Helena, as I’ve been out of the country in Korea, Ireland and India since about a month before we met. Some people I consider very close friends might have only met her once or twice, or in the odd case not at all. Now that we don’t have the wedding payment hanging over us, I’m going to have to make a lot of effort to go over to the UK a bit more and see them. Of course, if anyone wants to make use of our spare room in Dublin, you’re very welcome. My speech was a bit of a low point of the day for me. I completely feel apart emotionally; during the ‘thanks’ bit, I was just overcome by how much effort people had made for the day, and things didn’t really come out the way I meant them to, particularly on the romantic side. I’m dreading seeing it on the wedding video, But handing out the soju and kimchi was fun! 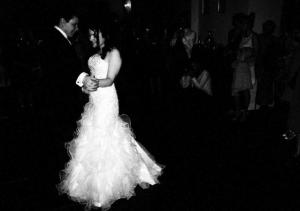 After dinner and the speeches, things got very lively. The first dance – Idlewild’s ‘You Held The World In Your Arms’ – was about as untraditional as you can be, but very us, and I think we got away with it. It was nothing like as scary as I expected, though I doubt my moves were all that impressive, either. Helena can really dance, but I’m like a scarecrow with someone shaking its stick. Sounds Of System Breakdown were a little bit of a gamble on our part, if only because they’re not a typical wedding band, but they seemed to go down incredibly well with most. I even found myself singing along to one track (I guess that was inevitable when I was down the front singing along to every word), and Rob and Richy spent a song or two strolling around the middle of the audience and absolutely rocking the place senseless. The DJ, Damo, was great, too.

Sadly we couldn’t launch the couple of dozen paper lanterns we’d brought in for the occasion, as it was just too wet and windy, but barring that I think everything went pretty much perfectly. Especially as there were plenty of people still propping up the bar with us come five in the morning, at which point the barman was getting extremely generous with his shots (including those from one very pricey bottle of whiskey). When we finally did get up to bed, we found the whole thing covered in confetti (thanks sisters x2!), and that my shoes had migrated out of sight. I never did find them, but the hire place let me off as a ‘wedding present’. People just seem to love weddings so much! 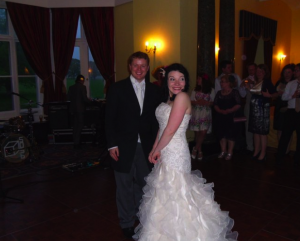 It really was an incredible day that lived up to every expectation I had of it. Markree is an incredible venue, and all the people who came out to celebrate with us made things really special. I’m only sorry I didn’t get as much time to talk to everyone as I would have liked, but with so many people around I guess it was always going to be difficult. You only get days like this once, and I know that I’ll never forget ours. For those asking, the next step isn’t a little one – not for a few years, anyway – we’re both incredible happy just us right now! It’s amazing how many people start talking about babies as soon as you tie the knot, but we’re certainly not in any hurry at all. I really can’t say thank you enough to everyone who made our wedding day so perfect – the effort really does mean the world, and I hope I’ll see all of you very soon.

Love to you all. Please leave a lot of comments, especially if you were there! If there’s one blog entry I’ll never stop coming back to, this is it, and I’d love to hear plenty of different takes on the day for 30 years down the line, when I’m reading back!