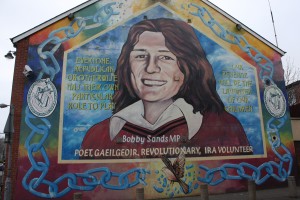 I’ve rarely been inspired – or perhaps affected is more appropriated – enough by a single hour to construct an entire blog entry based on it. Certainly not a single hour’s stroll, anyway, but my next two entries on here are both going to be exactly that. It’s impossible to live in Ireland for long, as an Englishman, and not feel fairly afflicted by the devastation that’s intrinsically linked – in truth the fault of – our nation in an older incarnation. Belfast’s Falls Road, and the conflicting and opposing community just a few dozen metres away in Shankill, are the most marked physical embodiment of all that ‘the troubles’ represent.

I must admit to being a touch intimidated by The Falls Road. In fact, I’ll be honest and say I was very intimidated. A few years on the away from home might have dulled the sharper edges of my native accent (stop chuckling at the back), but to all but the most untrained of ears, I’m clearly English. Belfast’s Nationalist/ Catholic community is not known for its love of the English. It might have been over the top, but I resolved not to speak unless absolutely necessary. 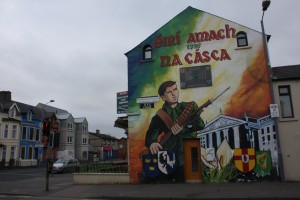 The first thing that shocked me is just how close Falls Road is to the heart of Belfast. It starts no more than ten minutes walk from the central bus station, and almost immediately you stumble across a collection of murals plastered along a seemingly temporary street-side wall. I also realized, almost immediately, that I’d been here before. Last time Helena and I were in Belfast, I distinctly remember missing a turning for the motorway back to Galway and heading up a random road (fortunately, in hindsight this road and not the following (Shankill) one, we were in an Irish registered car). We had to turn around, and got totally confused by why we couldn’t cut back across to the motorway slip road. The wall dividing the two entrances of the main road seemed illogical. It turns out that the blockade was the city centre end of the terribly named ‘Peace Wall’ that divides the two communities.

The first lot of murals are fairly tame. I was surprised to see that a lot of the houses along the Falls Road are actually quite nice, but the illusion is soon shattered: as soon as you glance down between the houses fronting the road, you’ll start to get an eyeful of shattered glass, burn-scarred buildings and piles of rubble surrounding foundations where perhaps the odd house used to stand. Only the thinnest of reconstructions has taken place, yet just a few metres from the damage, the ‘tourist’ murals (this is where the taxi tours tend to focus) feature statements of sympathy for various other freedom-seeking causes from around the globe, from Palestine to Cataluña, Che Guevara’s Cuban revolution to a simple, more local message stating ‘repression leads to resistance leads to freedom’. 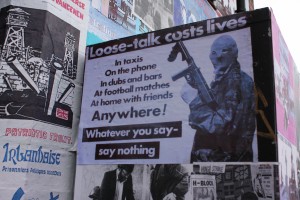 As you walk further up, things become rougher, and more poignant. The Falls Road is a district I’d feel uncomfortable in anyway: it’s distinctly rough and ready; a stereotypical district of run down housing estates with obvious drug problems and a harsh edge to the atmosphere. While the tour guides say walking up here is fine, they’re probably not referring to English people on their own, trying their best to hide high-end cameras. Fortunately, in what I’ve always found to be one of Ireland’s greatest oddities, most people were fixated with the Liverpool and Manchester United game on in the pubs, so I largely walked past un-noticed. Even in Nationalist Belfast, it seems, the love shown to two of England’s biggest football teams (yet hatred of the country on the whole) lives on: if you’re going to display something overtly British on the Falls Road, make it the shirt of a north western football team that plays in red.

The murals soon started getting more upsetting. The famous painting of hunger protestor Bobby Sands is a colorful blend of the Irish tricolor painted across the sidewall of the Sinn Fein HQs, complete with a slogan reading ‘our revenge will be the laughter of our children’. The shops quote prices in Euros as well as £s, and smaller signs promoting the Real Sinn Fein have quotes like ‘Brits Out, Not Sell Out’. Other memorable efforts include images in memory of the ‘blanketmen’ who refused to wear the prison uniforms of UK prisons, based on the belief that they should be treated as prisoners of war, not criminals. One poster depicts Margaret Thatcher as a murderer. She’s a common target. Another, complete with vicious looking balaclava-topped fighters clutching rifles, says ‘whatever you say, say nothing’, warning Nationalist sympathizers of the dangers of speaking freely about plans, even within their own homes. 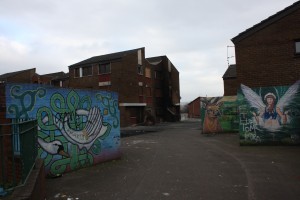 The Irish language is everywhere. In fact, in many ways, The Falls Road feels far more ‘Irish’ than Dublin: the Irish flag hangs across the street and from almost every lamppost, and every building. There’s a disturbing thought that creeps to the front of the mind when you realize just how many funeral homes are lined up the road, which also features its own hospital. The violence of the past, in other words, seems only very slightly below the surface, and the selection of churches and abundance of religious iconography seems to be more than just an affirmation of faith. One monument along the road is a tiny, fountain filled garden flying an Irish flag over a marble monument, and listing the names of countless local dead.

After a while, I got the confidence to wonder off the main road and into an estate. Inside, I found a whole load more murals, including a Perspex-mounted collage of perhaps 200 faces, each accompanied by the words ‘murdered’ in big red writing. They’re the images of various men, women and children of all ages killed by police rubber bullets over the past few decades, and attached to the criticism that no policeman has ever served a day for murder or manslaughter in connection with the deaths. The sheer number of them is disturbing: in places the streets are literally scarred with the remnants of a battle that’s meant to be over, but the political imagery is still alive, and stark. Much of it contains modern references and fresh paint. The fighting might have died down to a new low, but feelings still run high. 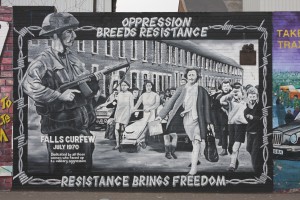 After a few minutes, I was approached by a local teenager. My immediate worry was that he had clocked me as a non-native; my dress sense is not exactly housing-estate chic, and I’d spent just a little too long looking at some of the signs to pass for a native. It turned out he just wanted a cigarette, but the paranoid side of me still felt the need to manipulate my accent and explain I that I don’t smoke in the fewest words possible. An hour in there is more than enough, and I suddenly felt I’d strayed somewhere I probably shouldn’t be. I headed for the other side of the wall.

Situations like this are difficult to take. The depth of hatred that still runs through a community like this brings home every piece of pub banter, every little English vs. Irish joke I’ve heard over the past three years, and suddenly they don’t seem in the least bit funny. While it’s impossible not to be aware of our countries nasty shared history, this experience – the deaths, the harshness of the political imagery and the underlying tension which is partly the result of my own discomfort, but also manifests itself in the wary glances and uncomfortable disconnect that the community seems to portray – brings it all home in a big, big way. It’s an hour that I’ll never forget, yet I did nothing more than walk through, and the ‘troubles’ have been tailing off (or a thing of the past, so they say) for most of my adult life. In the past, yet still very much alive. In a single hour, my perspective on Belfast city centre, where I had a night out drinking just ten minutes from the bottom of Falls Road, and its friendly disposition, seems an almost farcical yet pleasant alternative to deeper issues straining through the city’s suburban communities. I’ve rarely felt so uncomfortable, or so lucky.

I’ve tried to come across as neutral today. In truth, all I really feel is affected, insecure in my background and grateful for the fact that this isn’t how my life has been. The next hour, while slightly less uncomfortable (accent wise), was no less harrowing.

Just this once, I’m going to sign out hippie style, just to bring my own little bit of love to it all. I feel like it’s needed today.