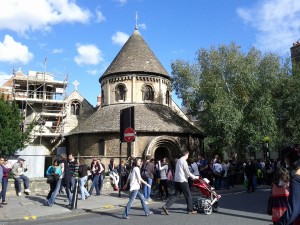 I was actually born in Cambridge, and must have visited the city dozens of times to see my grandparents as a child. My brother also went to university there, but even after all that, I just don’t seem to know the city. Too long either sitting in the grandparents loft playing Scaletric or messing around in the local parks with football stickers, I suspect. With my best man having recently got engaged himself (congrats Dickon!), bought a house and got a dog in the city, it was high time.

Friday night featured one of my most surreal airport experiences yet. A sizable American lady in front of us tried to stroll through security with what must have been at least seven bags of assorted make up all in clear plastic bags, and actually looked surprised when security called her on it. About two minutes later the tannoy system went off and a small child started to giggle and stutter its way through the ‘security announcement’. It went something like this… “laaaayyddeees and gintmen, dis issss a sssecurrrrteee annonsaaaament.” Followed by a load of complete gibberish. I swear the announcee couldn’t have been more than four or five. Someone got carried away on ‘take a child to work day’ is my guess.

The other end, aided by Ryanair’s tardiness and British Rail’s tardiness, saw Helena and I rocking up in the pub at about 11pm to meet Dickon and Sophie. After a couple of pints, Friday was already over. 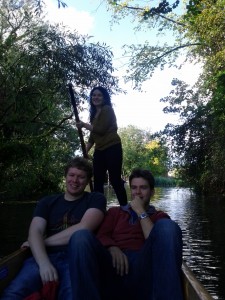 Of course, Saturday morning had an unmissable rugby match – Ireland’s win over the Australia was as brilliant as it was shocking – and then we headed over to explore the city. Aside from some quick trips to see my brother, I’ve never really explored Cambridge’s collegiate side. In fact, I’d be lying if I didn’t admit I’ve always found the well-documented snobbery of the place a touch offputting, but it certainly has a great atmosphere to it, with beautiful buildings and – possibly more importantly – good record shops and coffee shops. There was even a guy playing his guitar inside a bin, as you do (see pics).

After exploring the markets for a bit we decided to go punting. I’d never tried directing a boat around with a stick before, and while it’s really relaxing to sit in the bottom and just drift along, I spent my entire time stood on the back expecting to fall into the water the next time I went to push the boat along. Helena and Dickon were really good at it, but Helena’s friends – who came up from London for the day – and I could barely persuade the thing to move in the right direction. I’m told the locals have a trick with the bridges, where they climb on the top as they boat their way by and jump back down on the other side. I’ll leave that one to the pro – I could barely stand up on the thing.

What impressed me above all about Cambridge, though, was the positive vibe around the city. Perhaps it’s an economic thing, but I’ve long found that to be missing from Dublin. Spending some time with one of my closest friends obviously played a role, but one of the reasons I wasn’t keen on hanging around in the UK in the first place was that everything seemed really mundane and just a bit dull. Cambridge didn’t seem like that – good, affordable restaurants, lots to do and a kind of jovial feel to the place. It’s something that I struggled to ever find in Dublin and I’d certainly consider to be disappearing over the horizon over the course of the recent financial situation. While it’s difficult for me to imagine myself moving back to t 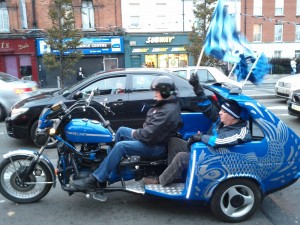 he UK in the near future – barring a job offer from someone really impossible to turn down (are you listening, NME?)– it certainly got the brain ticking over. I think once is enough for the punting, though, but I could certainly enjoy the curry shops and the poker from Saturday night a whole lot more. And a few more good performances from England in the rugby, too.

We came back to Dublin to total mayhem, with the Dublin GAA team having just won their first all-Ireland title for 16 years. I watched the highlights afterwards and the way they won the game – coming back from 4 points down with 6 minutes to go, and the goalkeeper scoring the winning point at the very end of injury time – was absolutely fairytale stuff, and turned our entire neighbourhood (just down the road from Croke Park) into a sky blue binge-drinking session. The motorbike in the pics gives just a little taste…