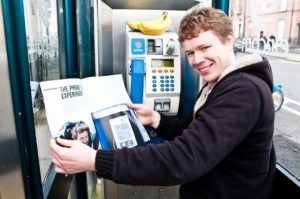 Of course, I’ll be giving a full overview of just what happened in the phone box last weekend at some point in the next few days, but I thought, as an interesting aside, I’d throw in a post on how the day went by on my Twitter account, which ended up being an essential part of the experiment. After all, these things eventually disappear into the server black hole, and I had a lot of fun doing it. Here’s the minute by minute, with a few added comments along the way (I’ve knocked off the phone numbers and tags so it reads a bit better):

8.18am – Sunny but cold. There’ve been worse days to stand by a phone box all day.

8.29am – Back from Tesco, fully stocked with food and ample reading material. Five minutes and I’ll be on my way.

9.11am – The PJs in public crew are out in force this morning. Nothing like the glint of springtime sun of the side of a phone box…

9.27am – First connected call. From Perth, Australia. Can anyone beat that? Kiwis?

9.49am – First location clue: I’m at a crossroads, and from inside my phone box, I can make out at least 8 shops. Pretty public!

9.56am – Someone keeps drop calling me. I won’t bite, I promise! Bit of a hangover kicking in.

11.10am – Call number three – the girlfriend – does that count? Representing Dublin though, fair play to her.

11.20am – Time for another location clue. Ever seen a double decker traffic light? I’m right next to one.

11.45am – It’s been a slow morning. Twenty five minutes and three calls so far, and a lot of pranks. Hoping it steps up when the hangovers clear.

12.07am – An entire tour group just came by. Own up, who told Tourism Ireland?

12.16am – The question was ‘how many same sex sexual partners have you had. Sorry if I upset anyone 😛

12.20am – Talking burlesque with Nialler9. Is it sexual? Who knows…

12.34am – John from the band Checker Board on the line. Dublin 3 Belfast 1 so far! We’re definitely picking up.

12.42am – Just been set a task by an entertaining French lady in Tuam. To think of twenty things that might have happened in my phone box, and draw pictures of them. I can’t draw :S.

1.16pm – It’s spotting rain. I might have to resort to hiding inside the phone box fulltime. Looks a bit creepy. Balls.

1.25pm – Talking Thai islands and monkeys with a Dutch girl. I make that ten callers and six nationalities!

1.29pm – Jamie from Ambience Affair on the line. Nice guy. Using me to avoid his cousin.

1.30pm – Talking to a pensioner about Joyce. I’m the gardener, apparently.

1.42pm – Been christened a phone slag. Two people wanting to shoot me from a building so far.

1.49pm – Expecting the photographer any minute, silly requests will have to be quick!

1.51pm – It’s been quiet for five minutes, glad of the break to be honest!

2.31pm – I’m starting to imagine the phone ringing. I’m not even kidding.

2.52pm – Went quiet for a while their. We’re taking a photos. I hear Scotland are struggling in the rugby?

3.26pm – Garda are here. It doesn’t seem to be for me. Might be that that donut-selling newsagents?

3.36pm – Just been offered home-cooked lasagna and stir fry. Very sweet, number 19, but you’ll have to find me first!

4.09pm – Just talked to a sweet nine year old about holidays in Cyprus. She likes the hotels. Aw!

5.08pm – getting seriously cold now. Anyone want to call and update me on the rugby?

5.26pm – Unless I make the last half hours undiscovered, this is your last location clue… Dublin 7.

5.38pm – Has anyone ever stayed in one, small public place for this long? Almost as interesting as the calls…

6.45pm – The staff in the pharmacy opposite just turned me up to ask what I’m doing. Thought I was dealing drugs. I had to show them the article!

7.02pm – Final call – Korean indie star We Need Surgery, calling from the studio in Seoul to tell me their album is finished. Result!

7.16pm – We’re all done, 36 callers from 8 countries, around 4 hours on the phone and a whole lot of laughs. Thanks everyone!

It started slow, but turned into a great day! More to follow, just wanted to get this all down before it disappears.