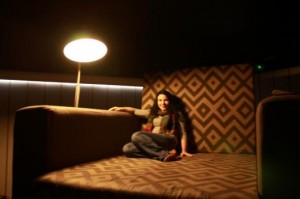 Easter was – mostly – an excuse to sleep, and catch up with work. By Monday, though, that part was pretty much covered, so we decided to go down to the newly founded National Leprechaun Museum. Inspired. The museum, that is, not our decision to go to it, which was… well, childish, but this kind of stupidity is pretty hard to resist.

On entering the land of the little green men, you arrive in a room full of Leprechaun memorabilia. There’s Homer Simpson as a leprechaun, a former Irish leader featuring on the cover of Time Magazine with a leprechaun on his shoulder and even a tiny leprechaun outfit (which, bizarrely, is brown, not green. Apparently they can wear red hats sometimes, too, if they’re a particularly evil flavor of leprechaun). A small man dressed in green (in this case, not a leprechaun), ran us through an introductory talk that involved the grasping of fictional wells and making wishes to the green fiends (as well as a full explanation of exactly what they are, which, in short, can be summarized as evil little bar stewards), before walking through the magic door. Which was, well, a door.

The other side of the magic door was a magic tunnel. The magic tunnel magically makes you into a leprechaun-sized creature, and exits underneath the wooden version of the Giant’s Causeway. In the next room, everything is huge. Chairs are three times the size they should be, and small breakfast bowls are mysteriously replaced by mixing bowls. To leave the room, you walk through a fireplace. That’s symbolic, apparently. It’s hard to leave the oversized chairs, though. They’d make good beds.

Later on we seem to change tack, and focus on fairies. Never dig into a fairy mound. If you do, your legs will break and your arms will spontaneously fall off. If you sleep on one, though, you’ll wake up with some incredible talent. There are a lot in Ireland, though clearly no Irish boy band has ever found one (I’m looking at you, Westlife. And Boyzone). There’s a story about a leprechaun who gave away the location of his pot of gold, but his tormentor had no shovel. He marked the tree under which the gold was buried with a red sock, but when he returned every tree had a red sock. At least he never had to replace his sock draw. Then there’s the rainbow, a colorful line of draped fabric that you have to burst through to get to the pot of gold, which seems to be standing in the middle of a large stony presentation spot rather than buried under a tree.

Finally, we wondered amongst a golden wavy room of magic, and strolled past the wishing well of the leprechauns, somehow forgetting to make a wish, and stumbled back into the cold Dublin air with two pieces of leprechaun gold. Net value around 6 Euro.

I am not, sadly, a leprechaun. On the plus side, I am still full sized, and Helena bought me some eggs. They were beautiful. I also went to see Fun Lovin’ Criminal on Sunday, and a superb album launch from The Dirty 9s on Saturday night.

Not a bad Easter, all in!