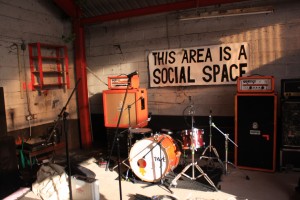 The longer I stay in Dublin, the more I love the music scene here. Perhaps its a question of access: working for a couple of music magazines means I’m never far from the heart of things, but I genuinely think that Dublin’s contemporary music scene is very nearly as good as the whole world knows it’s traditional music scene is.

One of the reasons for this is the way that it’s run. There are so many people putting themselves out there and creating something new and original that it’s easy to find something different and a bit special to go to. Hideaway House is one example of this. Run by a guy called Dylan Haskins, who started the venue when he was still too young to drink, Hideaway House is different in that its a random house in an upmarket Dublin suburb, in amongst a whole load of local residencies and a long way from even the nearest pub. You’d do well to come across a more random venue, yet they still manage to get some of the biggest names in Ireland playing to a few hundred people in what is essentially someone’s back room. 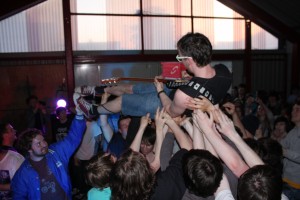 This was the final show, and had a real festival atmosphere in the summer sun. It’s pretty unusual to see young children at concerts, but Hideaway is all ages, and one of the nicest experiences is in watching energetic punk bands play with four year old children dancing down the front. For the last show, so many turned up that the main event had to be shifted to the big garage round the back, with Belfast instrumental punk band And So I Watch You From Afar (who sold out the 1000 capacity Andrews Lane Theatre last time they were in Dublin) providing the main draw, along with Irish tourism advert stars Heathers. Not that anyone knew that before turning up, as the entire show was unannounced. At five euro a ticket, it only adds to the excitement after all.

The bands played on a carpet in a sanded garage in front of a sign saying ‘this is a social space’ and mingling with the audience in between songs. Several of them got full on moshing going off down the front, especially the last show from a Blackrock punk band, which finished with the guitarist playing an entire song lying across the audience. Everyone bought their own beer (obviously it’s difficult to license someone’s back garden, but why would you when it’s this much fun?), and Dylan spent the night handing out water or ‘stage-diving’ from the speakers, only to find there weren’t enough people to catch him (cracked ribs, apparently, but I guess he was celebrating the end of an era…). 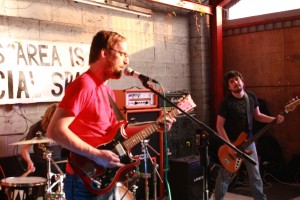 As much as this was just five bands playing in someone’s back garden, for me it was very much like the first festival of the summer, and a night that’s not going to be forgotten in a hurry. It’s an entirely different experience seeing big local names perform in tiny venues compared to watching them from a distance on stage in the city centre, and despite the night being my first trip to Hideaway House and the last show, I think it’s something I’ll miss having as an option, it’s a real shame it has to close down. Surprisingly, it’s not for legislation reasons, but as Dylan’s going on to bigger and better things, running a venue in Temple Bar.