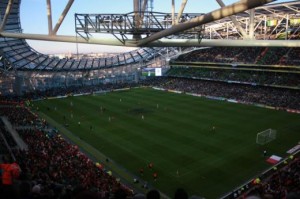 A quick look back at a few overlooked moments from 2010…

The FAI Cup Final: Holding the Irish FA Cup Final in the new Aviva Stadium and pricing it at just ten Euro a ticket was a stroke of genius. The place has a capacity of over 40,000, so there was no way it was going to fill up otherwise, and people like me – who’ve only ever seen one Irish league team live before (that was because they were playing my own team) took the chance to see what the new stadium’s like, and get to watch a proper cup final. The quality of the football’s okay – Sligo Rovers, who finished mid table in the Irish league – totally outplayed champions Shamrock Rovers, though they didn’t really have any cutting edge. Strangely, Sligo have a former Cameroon World Cup player in midfield whose genuinely far above the average level for the league, and apparently chooses to play in Ireland because he loves it here. Sligo eventually won the game on penalties, with their goalkeeper saving all of them. By then I was freezing cold up the top of the stadium, but still well worth a look, especially as it’s cheaper than going to a game at Bohemians, which is just round the corner from my place.

Dublin Gay Pride: I feel it’s important to stand up for what you believe in, whether it affects you or not. Gay pride in Dublin is always going to be a touch controversial, if only because of the religious bent of a lot of the older generation in particular, who are more than conservative enough to protest something like this. For exactly that reason, Helena and I went down to support it. I love the color and extravagance of these parades (see pics), as if I needed another reason to hang around. 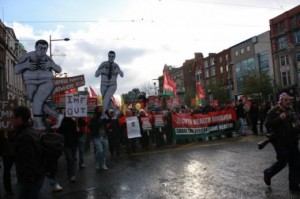 Political Protests: There’ve been a host of political protests in Dublin over the last few months, from students breaking into the department of finance to the reversing of a cement mixer into the front of the Dail (Irish parliament). We only got involved in one – a huge one two days before the announcement of the new budget, which saw around 60,000 people walking through the heart of the city with huge banners. We would have hung around a lot longer and watched the speeches, but it seemed to be turning a bit messy when we saw someone burning an EU flag, so we decided to call it a day. Some of the protest signs were great, though – ‘Fianna Fail put the n in cuts’ was a particular comedy favorite (sorry kids :S). Sadly it didn’t seem to have any effect. Ah well, let’s hope the taxes don’t fly up too dramatically. At least the banker’s bonuses got canceled (just, they very nearly got six figure bonuses for their work bankrupting a country this year. Shocking!). 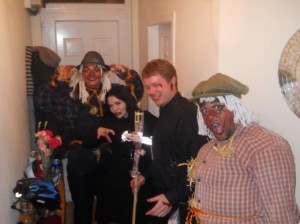 Belsonic/ Belfast: Since working for AU Magazine (which is based in Belfast), I’ve had a growing association with the city, and I have to say that for all the bad stories you hear, I actually really like the place. I went up for a city festival called Belsonic earlier in the year, got to see ‘AU Towers’ and caught a bit of cross-border shopping along the way. We should go up more often really, given that it’s so much cheaper and the buses run all night. The city centre’s really quite nice, reminds me a lot of London architecturally. Not a bad music festival either – 2 Many DJs, Two Door Cinema Club and Soulwax all in one night. Hardly Glastonbury, but can’t complain!

Halloween: Dressing up is acceptable once a year, right? A very memorable night, if only for the effort that went in. I only mentioned it because it gives me an excuse to put up a couple of pics. I was the ‘Holy’ victim of a vicious vampire…
I’ll probably think of more random thoughts that should have squeezed in here over the course of 2010 at some point, but this’ll do for now. Time to look forward, not back!