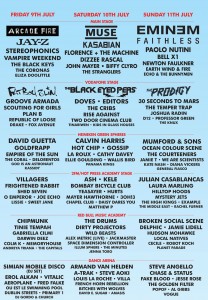 Time, finally, to break my Irish festival duck. Given that I’ve now been here nearly two years, and that my only attempt at a festival last year was a single day at Reading to catch Radiohead (my weakest music festival showing since I started, including my time in Korea, though Radiohead make up for a lot), I may be going a bit overboard this year. It turns out I’ll be going to at least four, with Oxegen already gone this past weekend, and press passes already confirmed for Knockanstockan (wonderful name!), Castlepalooza (another wonderful name!) and Electric Picnic over the coming few months. Three of those (including Oxegen) are in the space of a month. Mmm, musical goodness! Oxegen should have been on a press pass, too, but the promoters in their wisdom didn’t send it through until the Monday afterwards. Still, I’d happily paid out for a ticket in advance, so no harm done, I shouldn’t be greedy. You can link through to all my reviews here (this is a rolling link of my State articles, so if you’re here a bit late, they might have disappeared down a few pages).

I’d heard a lot of bad things about Oxegen in advance, nearly all of which turned out to be true. It does rain all weekend, and it is full of some of the least enjoyable people to be around you’ll ever come across (more drunks than music lovers). A shame, as all in, the musical side of things was fantastic, you just have to ignore the rubbish. I’ll be honest, I’d have absoutely no idea where to start in terms of changing things. To save you a whole host of rambling, though, I’ll give you a pro and con spiel: 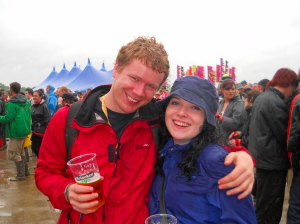 Muse – as ever, one of the best live bands on the planet. I just can’t get enough of them, ‘Time Is Running Out’, ‘Hysteria’ and Citizen Erased’ absolutely blew me away. Matt Bellamy also played in shutter shades, and he’s about the only man in the world who can get away with that. Assuming, of course, it was ironic. I think it was.

The Temper Trap – a real festival moment, standing in a crowd of thousands listening to ‘Sweet Disposition’. The rest of the set was great, too.

New bands – a host of little acts I haven’t seen before that really impressed me. Local Natives, Dirty Projectors (okay, hardly a small band, but I’ve never seen them before) and Wild Beasts particularly impressed me. Villagers were great, too.

Saturday – partying with Helena (she only had a day ticket) in front of the incredible Two Door Cinema Club, who are without doubt the hottest thing in Ireland right now. Bumped to the main stage at a few days notice due to the expected turn out and they absolutely blew our socks off.

The Asian Buffet – an antidote to overpriced festival food – a mammoth buffet that fills you for the whole day for only a few Euro. Loved it they recognised me by the end and knew I was going to ask for ‘everything’.

The sun finally coming out on Sunday – and whisking away the puddles. 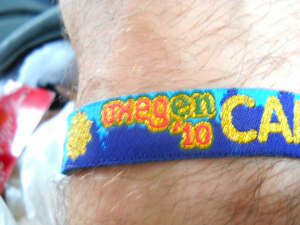 Abundance of idiots – some of the behaviour at Oxegen is appalling. Peeing in the middle of big crowds at the arena. Launching bottles across the entire audience. Groping people as the crowd surf. Shouting and blowing those stupid vuvuzelas during the quiet moments of some really special performances. Drinking until they throw up, consistently, and then doing so in the middle of crowds.

Mud – It wasn’t so bad, but a little sun would obviously be much better. Also, being on a horse racing course, the mud isn’t quite as pleasant as it might be elsewhere… smelly.

Security – a touch excessive in taking plastic bottles off you as well as glass, yet hundreds still ended up inside. Purely a money making exercise forcing everyone to buy overpriced festival drinks, and it punishes those who are honest enough not to try and hide the alcohol they’re bringing in. The festival’s expensive enough as it is, this makes it worse.

Bad music – I didn’t even see Black Eyed Peas, Dizzee Rascal, Jay-Z or D12. I did see Eminem, but he was very average. You can gaurantee this lot are the reason such a bad, non-music focused crowd showed up.

Florence and the Machine – not so much for Florence, though she didn’t seem that up for it, but for a crowd that destroyed an otherwise decent set with their whistling etc. She was far, far better in the Olympia in front of her real fans early this year, so a bit of a let down all in.

Overall it was a good weekend, if a very exhausting one going backwards and forward daily and writing reviews every morning before going back. I’m very short on sleep! I was never, ever going to miss Muse playing live in Ireland, though. I just don’t have it in me.

Bring on Knockanstockan in two weeks time; festival round two!