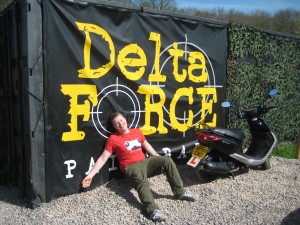 Whoever invented stag nights deserves a medal. I must admit I was at least as nervous as excited about exactly what the 16 lads who came down to Bristol had in store for me, but there’s no way you can ever forget a night like this. I guess that’s the point.

Before the big night, Dickon (my best man) had booked us into a session of paintball. I’d already had a 5,30am pint with the two guys who came over from Ireland with me (airport bars never close, apparently), and Dickon had provided a hip flask of whiskey for the drive over, so things were already starting to take off. Walking around a few shops in Bristol at 9am wearing a false moustaches and thick glasses was a step in the right direction, too. 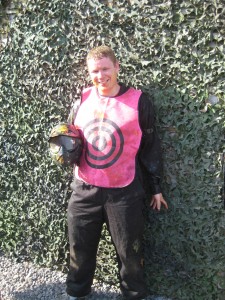 To start with, though, the paintball all went a bit wrong, Our first game was pretty much written off by around half of us only being able to fire about 10 metres as the gas was the wrong type for the impressive heat, and it took a couple of hours to really get it sorted. No doubt it annoyed some, but for me it was just a chance to catch up with a fair few people I haven’t seen for (in some cases) half a decade before they poured so much alcohol down my throat that things stopped making sense, so at least as good at the paintball.

When we did get going, I found myself fighting with a pink targeting strapped to my front, while everyone else was in black. There was another stag in a tutu and yellow wig, but I’m still arguing that the big pink target was a good reason for being hit early on in more than my fair share of games. Then the real fun began. A ‘capture the tiki mask’ game turned into a mass stand off over a bridge with pink smoke flying everywhere, and then the ‘stag hunt’ got under way. The other stag and I had five volunteer bodyguards and tried to hold off around 30 people pummelling us with paint from every angle, before most of the bodyguards used their ‘defensive’ position next to us to back off a few metres and ensure our limited cover was completely useless. I counted this morning, and I have about 20 hits that were hard enough to still have a heavy mark three days later, and by the end I could barely breath through the mask as there was so much paint coated on the outside. Still, only one solution to that kind of problem: Rambo it. I think it won a certain amount of respect, but not all that wise. 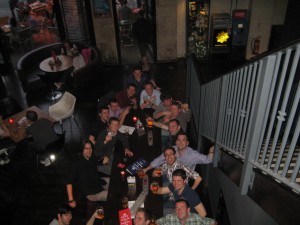 Then for the dreaded night out. I’d only been in the hotel bar a few minutes when the pints and shots started landing in front of me, while a few of the lads used the break as a chance to throw on some Birmingham City shirts, though – unlike the first year of university – they never got quite enough beer down me to persuade me to wear one. That, or they were drunk enough to forget about it.

The first stop was Vodka Revolution, which in hindsight was probably the quickest way of getting drunk in the world, and so possibly the wrong call. In other words, epic. Two strips of six vodkas landed in front of me in about twenty minutes, then the stag rules started coming in: punishment for drinking ‘incorrectly’, punishment for not having a drink in front of you, a requirement that I had to hassle (and acquire souvenirs from) every hen party we bumped into, and several shots of ketchup, vinegar and anything else that happened to be on the table. I soon had two hen party balloons tied to each shoulder of my shirt and much-needed alcohol absorbing free pizza. 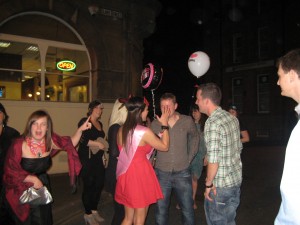 Dickon had booked Hooters for 9pm, so we headed there next. This is where things start getting a bit hazy, but one bit I’m not going to hear the end of in a hurry is the next hen party. I stopped them in the street as part of the ‘stag rules’, and they demanded my underwear. Let’s just say that ‘I’ll have to take my shoes off’ is not an excuse that works well in these situations, and that I’m grateful to those kind enough to shield me while I stripped in a fairly prominent street in the middle of Bristol. Reminder for any future stags: don’t wear loose trousers, or at least go with a belt!

Hooters is just funny. I’m not particularly keen on the idea of strip clubs (not only are they seedy, but also exorbitantly expensive), so this seemed a good comic compromise, and one at a level that didn’t seem too offensive to my lovely wife to be. It might only have been 9pm, but my head was already starting to spin (a dozen or so shots will do that to you), and Dev and I decided it was a good idea to eat a serious quantity to try and absorb the alcohol. Fifty ‘Nine Mile Island’ spicy chicken wings to be precise. I’m still feeling them three days later. After we’d eaten and thrown down a whole load more beer, I found myself stood on a chair at the end of the table, with the Hooters girls dancing around me and singing something about saying goodbye as I’m ‘off the market’. Or at least that’s how I remember it. I definitely stole their inflatable hammer, and I’ve heard there are a few videos going around of me battering them over the head while they sang. 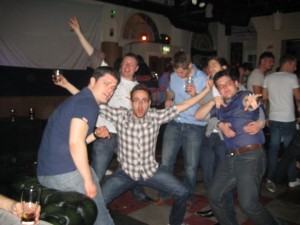 Then came the clubs. The first club we went into – forgive me if I’m a little hazy on the details at this point – was awful, but we only stayed long enough for my brother to send some oddly cringey messages to the big screen and the bouncer to tell me to stop climbing on the outside of the empty podiums. Oh, and for some drinks. So we headed for an indie club instead. I’ve heard that it was in a bowling place, for some reason, though I have absolutely no recollection of that (I’m allowed, right, on a stag?). Judging by the photos I spent large parts of my time in there either requesting things the DJ was never going to play, or singing along to songs that I probably, mostly, didn’t actually know the words to. As you do. I’m pretty sure there were quite a few of those horrible Jaeger bomb things involved, too. And a Hooters t-shirt, signed by with magnificent spelling like ‘good luck in the furture’. An educational hot bed, that place.

I’m really piecing things together now, but the hotel bar – I think – was the last stop, via some form of take out. My brother excelled himself in managing to lose his shoes somewhere on the walk; next thing I knew the bells were going off on the church outside our hotel room and Dickon and I were watching the Malaysian Grand Prix from our beds at 9am whilst still quite notably drunk. 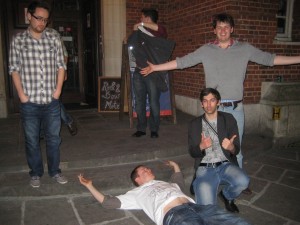 I still feel pretty rough around the edges, but that’s absolutely the point; to remember every moment or get through the night without at least some form of ritual humiliation… I mean ‘preparation for married life’, which obviously requires mass binge drinking and consumption of shot glasses full of vinegar… would have only felt like a let down. I’m sure a few of those who came down have a few other funny anecdotes to add to this. I’ll try and get round to adding the best.

I have to say a massive thank you to Dickon for organizing it all. In fact, I need to be as nice to him as I possibly can for the next six weeks, if only because he’ll me making the dreaded wedding speech, but it genuinely was a pretty special effort, and I loved every second of it. Everyone else who came down, especially those who I haven’t seen for so long but still made the effort, it really does mean a lot. You’re all welcome to come and make the most of the spare room in Dublin any time you like, though probably best left until after the wedding is done and dusted.

Is the hard part over? Well, I’d hazard a guess at saying the worst of the after affects are fading, aside from the insanely hot chicken. This should be as scary as it gets wedding wise, at least until the first dance :S