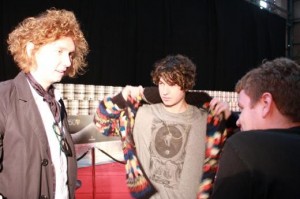 There are a few moments since I’ve started writing that have made me feel on top of the world. There’s the day my first article was published, the day I came face to face with some of my heroes, Pendulum, and shared their whisky while quizzing them for half an hour, and the day I first saw one of my articles in a national newspaper. I’m pretty sure another one of those days is coming along in the next few days: the day I see my name emblazoned across a book, which should be in early October, release dates being well. This Guinness gig was definitely one of those days.

Tickets for the storehouse gig were like gold dust. Fortunately for me, my writing keeps me glued to the screen for a lot of the day, and when State’s press offers came through, I was the first to get back and grab them. So early Thursday morning I hopped on the bus to Dublin, bought Helena lunch while she took a break from work, and walked over to pick up my press passes.

I’ve been to a fair few gigs on press passes before, but nothing anything like this inundated and professional. After grabbing my ‘approved print media’ pass I decided it would be silly not to check out the official press facilities, despite the fact that I had absolutely no reason to go there. One of the side rooms in the storeroom was an absolute hive of activity, with journalists from every major paper in Ireland (and several international ones), TV broadcasters setting up their equipment and radio presenters discussing strategy for getting the best interviews. I settled for checking my emails, shooting off a couple of messages so I looked busy, and grabbing a free sandwich and bottle of water. Then a thought occurred to me – lots of important people, get to chatting and start handing out some of my beautiful new business cards. Chances are nothing will come of it, but it was harmless!

After about an hour it was red carpet time. We each had an allocated place along the side of a warehouse, the entry to the main gig venue, and stood for two hours while various celebrities walked past, and we grabbed them for interviews. The list of big names I had the chance to talk to is absolutely phenomenal, and yes I am going to bore you with it (sorry, but this was seriously exciting – if you’re not into music skip the next couple of paragraphs though…).

To start off with there were a host of Irish politicians, including the leader (no way I’m going to try and spell the Irish name for their political leader!) Brian Cowen, the leader of the opposition and the trade and industry secretary (who whispered to us that she doesn’t actually like Guinness). At this point I was more than a little in awe; we had no idea who was going to turn up in advance, and I tend to prepare pretty meticulously for my interviews. The spur of the moment thing doesn’t work so well for me. 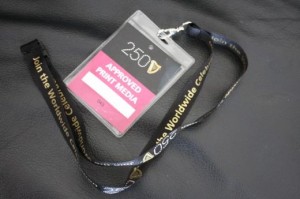 But listening to other people, I got the hang of it. David Gray was a real gentleman, taking 45 minutes to walk down and talk to everyone. The Kooks gave us lots of Brighton vs. Dublin quips (they’re from Brighton), Razorlight told us a few of their plans for the new album, and John McClure from Reverend and the Makers admitted he’d had a fair few Guinness’s already. The Guinness family came down and talked about how happy they were with it all, then a model bought in all the way from Sudan, called Alex White, gave a great talk about what Guinness have done for her country. The musician just kept coming: The Enemy, Kasabian, Dizzee Rascal (who was predictably arrogant), Tom Jones (what an absolute legend), Lisa Hannigan and Jamie Cullum all came over for a chat, quickly followed by The Magic Numbers, Soul II Soul, Republic of Loose and The Wombats. In fact I met so many well known stars in the space of two hours that I’m sure that’s not even half of it, I wish it had occurred to me to get a few more photos, but anyway… brilliant.

After all that it was time to go to the actual gig. You couldn’t buy tickets to be in the Storehouse on Arthur’s Day, you had to either win them in a competition, work for Guinness (in a decent position, too, I’ve been told), be someone famous or work in the media. So I felt really privileged to be there. What I didn’t know in advance was that everything would be free all night – free pints of Guinness (insert your own joke about organizing a piss up in a brewery), free food, free wine, even a special Guinness 250 pint that seemed a little easier to drink (probably a conscious thing, there’s only so much of the really thick stuff anyone could manage!).

The gig was brilliant, presented by Ronan Keating, with Tom Jones, Kasabian, Estelle and Dizzee Rascal as surprise guests. I met people from the UK and Canada who’s been flown in as competition winners in the crowd, as well as a couple of crazy lads from back in Galway, and had a quick chat with Irish rugby player Gordon D’Arcy. I’ll try to remember to add a link to my gig review when it’s posted, give me a shout if for some reason you’re desperate to see it. Suffice to say Tom Jones was predictable cheesy but worth watching, Estelle was rubbish and Kasabian was as manic and enjoyable as always. Dizzee Rascal… he was just a nutter, but I didn’t expect much else.

We weren’t done there, though: my press pass also got me into the after party, where Paolo Nutini and Lisa Hannigan were playing in a corner, and every bar in the storehouse was open for business. You could wonder round the exhibits sipping a pint, chat to assorted celebrities (not that I usually recognize them – the introduction system on the red carpet saved me many a time!) and grab a very impressive bowl of something cooked in Guinness to keep you going for the rest of the evening.

I got the last bus back to Galway from Dublin, only to find when I got in that the party was still going strong, with the locals stumbling through Galway’s streets and shouting ‘to Arthur’ at sporadic intervals.

Utterly brilliant, and the closest I’ll probably ever be to feeling like I’m famous. I just wish I could have bought someone with me to share it all, but tickets really were like gold dust. So much so that on the way in I saw a guy being arrested for repeatedly trying to break the security cordon, and a little old lady begging the ticket office to help her see her hero Mr. Jones before she passes on. Poor thing.

What an incredible night!