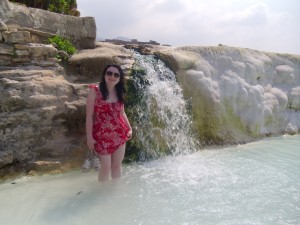 In truth, it took until the second half of the week to really get into chill out mode. I can’t stand massage, but Helena had been making the most of the spa, and we’d spent a lot of time just strolling around town or lying by the pool. It was time to get stuck into a few of the better sites:

Pamukkale: I’ve been aware of Pamukkale for some time through research in my travel writing, and it’s a place I definitely wanted to check out. It translates as ‘cotton castle’, and is mainly a very slowly flowing waterfall draped over a huge cliff side. The thing that makes Pamukkale a bit special, though, is that as the waterfall has developed it’s left behind deposits of white minerals, creating little spa-like pools of crystal white mineral water that make their way slowly down the hill. It looks cold in the pictures, but Pamukkale’s water is actually around shower temperature.

The site also has a Roman settlement above it called Heiropolis. We didn’t explore much of it, as we’d had our fill of Roman ruins at Ephesus, but we did drop in on Cleopatra’s pool, a hot swimming pool with ruins scattered across the floor, which is fed by the same hot springs that fill Pamukkale itself. Legend has it that the pool was originally filled with donkey milk, but given the size of it, the milk was either disgustingly gone off, or the entire surrounding countryside was nothing but one large donkey sanctuary and housing for an army of specialized donkey milkers. We didn’t go in, as the price for a quick swim had been pushed to nearly 15 Euro a person, which seemed a little ridiculous. 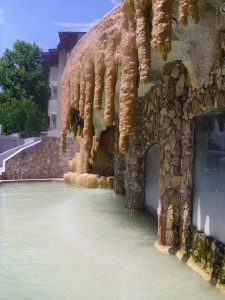 Still, Pamukkale itself took us strolling down the white mineral walkways, getting progressively more sunburnt, and enjoying some really incredible views. Give the pictures a look – the little flowing pools are just so different to anything else I’ve ever seen that the experience is a bit special. I hope it’s not one of those tourist attractions that’s going to be destroyed by overuse.

After Pamukkale, we went to enjoy a traditional Turkish mud bath.  The mudbath’s in this part of Turkey are particularly odd, as they’re filled with mineral water from the hills above, and – not unlike Pamukkale – the outside of the baths are formed with solidified minerals and – because of the iron further down the hill – have an odd brown tinge to them. The heat gradually reduces as you get further away from the central spot, where it pours out of the ground at about fifty degrees. Then there’s the standard swimming pool and another little crystalline pool that’s a little less murky – great for the skin, though the entire place does smell of eggs. Who wants clean mud!

Samos (Greece): This was my fourth trip to Turkey, but I’d never been to Greece. The chance to hop on a boat for a day trip to the island of Samos, then, was irresistible. Samos is about a two hour boat ride from Kusadasi, but despite having exactly the same climate, it’s immediately obvious you’ve swapped countries. Of course, the Turks and the Greeks aren’t exactly renowned for their friendly relationship, but this part of Greece certainly has one huge thing over Turkey: despite changing to the Euro, their prices don’t seem to have gone through the roof just because a few tourists turned up. 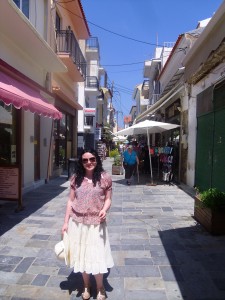 Samos is absolutely beautiful. In fact, we only did two things while we were on the island. We walked around the huge bay, looking at the landscapes and enjoying the incredibly quaint little backstreets. We explored a supermarket (for some reason I love supermarkets in foreign climes) and discovered that a 1.5 litre bottle of wine (or two bottles of wine, back home) costs less than two Euro, so decided to sneakily import one.  Then we kept walking until we got to the far side of the bay. When we came back, I was determined to take the chance to try Greek food.

My German students are always going on about Greek food – its reputation’s not all that different to Italian over there – but its reputation in the UK and Ireland seems to be fairly lowly. We decided to take the waiter’s advice on what to eat, and ended up with a very refreshing cheese and tomato pan fried chicken dish, a seafood salad and some ice cream coffee, along with a couple of local beers called Hellas Fix and Maythos. Of course, a few hours in Greece is nothing like enough (Helena once spent an entire summer there, and she always raves about it), so it’s definitely somewhere I have to come back to. The back streets are just incredibly quaint, though when I needed a shirt to cover my back for the walk, I ended up with one with ‘handsome style’ written on the back. Not one for the Irish summer, I don’t think!

The Chill Out: I don’t think I’ve ever read five books in a week before, whilst just lying by a pool. I’ve never been the type for that kind of holiday. I don’t think I am now, but it made a very, very nice change after the hectic run up to the wedding. Once we discovered the quieter corners of Kusadasi, the town turned out to be really charming, especially the restaurants. Numerous kebabs and the discovery of a disgusting spicy fermented carrot drink were particular highlights. I tried Raki once, too, and can assure you its utterly repulsive. We ordered a fair bit of room service, too, and spent a couple of evenings drinking wine on the balcony and just taking things incredibly easy. The perfect start to a marriage!