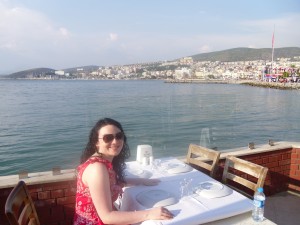 To say we were tired after the wedding is one monster of an understatement. The following day we grabbed a lift back to Dublin with David, my Uncle, dragged everything back into the house and just collapsed. I was so tired that when it came to cooking dinner, I managed to melt something over one of the hobs and set fire to a baguette. Which I honestly didn’t even know was possible, they’re hardly the most combustible foodstuff. I rarely see some of my friends, though, so I dragged my incoherently tired self into town to watch the Champions League with those still hanging about in Dublin. I think I managed about three sentences to them all night, but I guess that’s just a sign of how good the wedding was.

Normally I’d be very excited about a holiday, but I hadn’t really had much time to think about Turkey. In fact, with the wedding coming first, I don’t think it really sank in that we were heading off until we actually arrived at the airport. The first night, when we walked into a restaurant overlooking the Aegean Sea and tucked into some incredible local cuisine (stuffed vine leaves, kebabs, Efes Beer and extremely strong Turkish coffee) it seemed extremely dreamy and oddly unanticipated. 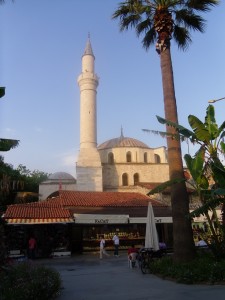 Kusadasi is on the south west coast of Turkey. It’s a popular tourist city, particularly with Irish tourists, so much so that you can walk through the streets and listen to the stall holders imitating accents from different regions of Ireland. They’re so good, in fact, that when Helena told one she’s from Dublin (thinking he probably wouldn’t have heard of Mayo), he immediately knew she wasn’t. Like most tourist towns, it has its down sides: there’s a fair bit of hassle and the prices have certainly gone up extremely significantly since I was last in Turkey around 9 years ago (as we suspected, it turned out this was because of the touristy side of the area we were in, rather than just inflation). There was an entire street of Irish bars. Then again, it did have a nice Turkish side, too, especially in amongst the markets and away from the main streets.

We raided the markets for apple tea, Turkish delight and a big selection of spices, and ate on the seafront on freshly barbequed sea bass and prawns. We even gave in to the touristy side when a waiter guessed we were on honeymoon – we must have had that look about us – and repaid him with few cocktails in that beautiful evening heat that Mediterranean countries have.

The hotel itself was a four star resort overlooking the ocean, and while it was very nice, we felt a like we were just in a very sunny corner of Ireland. We got used to just using the pool (or the massage parlour in Helena’s case), and then spending a lot of time hopping on the local ‘dolmus’ bus into the city or walking down to the beaches. There’s on particular beach in Kusadasi called ‘Ladies Beach’, which I think we arrived just early enough in the season to really enjoy. The entire place was lined with fantastic restaurants and a very nice chilled out vibe, at least aside from those very persistent salesmen. Of course, the sea is a perfect turquoise and a nice temperature for swimming once you’ve forced yourself through the initial shock. Once we got down to the town and away from the hotel, it was very easy to forget that the ‘entertainment’ back at the resort consisted of a local woman counting down from ten, only to just clap when she reached zero. Brilliant. And they wonder why I’ve always preferred independent travel to package tours… 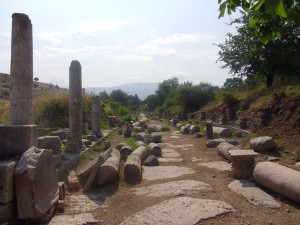 Perhaps Kusadasi’s most famous tourist attraction (the other two places we went were far further away, as you’ll see from the second blog), is Ephesus. Ephesus was originally a city run by the female warriors of the Amazorus in the 11th century BC, and later taken over and entirely relocated by the Romans, before collapsing in around the 4th century AD due to a series of earthquakes. The attraction is the ruins, and to date only 15% of them have been uncovered, though – given the heat when you arrive even slightly inland – it’s amazing that they’ve even managed that much. As soon as you walk into the place, you’re entirely surrounded by excavated streets, assorted columns and plenty of other wacky places.

The best of them is probably the 25,000-capacity old arena (there’s a smaller one of perhaps 2,000, too, which is impressive in itself). Then there are views of terraced houses from the top of a hill, ancient toilets chipped into a building’s rooftop overhang and rustic old roads that make it really easy to picture just what it might have been like to see the place in its prime. The entire city was relocated twice in its lifetime due to flooding, which means its spread across two sides of a hill. 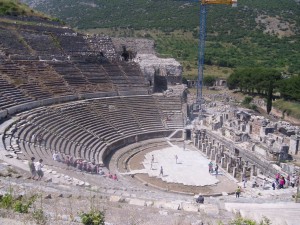 Outside, a few locals try to sell coins that they claim are authentic. They’re probably not, but if they are, buying one could lead to a five year prison sentence. We visited another sight on the way over, the marshy spot of an ancient God’s temple, most of which was burnt to the ground in what was almost certainly an ancient con to take the gold that the ‘God guarded’. The God was said to be away taking care of a birth at the time. All that remains now is a marshy piece of land full of terrapins and a single, tall column (the rest, apparently, are in the British museum).

Amusingly, perhaps the most famous symbol of Ephesus is a statue that turned up on the grounds: a man with a penis about the same size as the entire body. Alongside the multi-breasted birth God, it all seems to fit well with one major aspect of Ephesus that the guide emphasized: around 90% of the male population of the city in Roman times were thought to be gay. The performance we saw just before leaving didn’t include that aspect (Turks were far more liberal 2000 years ago then now, apparently!), but we did see a little staged fight and take the chance to sit on the Kings and Queens chairs. Still, I’m not sure I’d have enjoyed the earthquake-prone, dusty hills of Ephesus in Roman times.