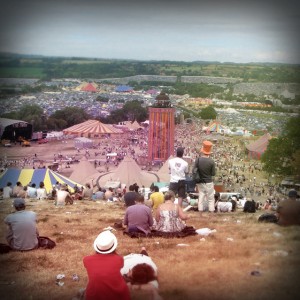 Ah, Glastonbury. That very first time I stepped foot on Somerset festival soil – at my first ever festival a decade ago – I knew that this particular relentless party would probably never be beaten. So far, around 25 festivals later, I’m yet to find another event that I’d consider even half as good as Glastonbury is.

This year, I bought Helena to her first Glastonbury, and we treated it as something of a second honeymoon. That meant my first festival in a camper van, something that turned out to be a bit of a mission. The guy we hired the van from forgot to tell us he’d moved house from Greenwich to the east coast. We ended up trekking all the way out to near Southend from London to pick up the van, and didn’t get on site until 1am Thursday morning. Yes, that’s still 32 hours before the main stages kick off. No, for Glastonbury it’s absolutely nothing like early enough. I need every second I can get there, especially knowing that next year’s a fallow year. Did I mention a huge lorry reversed into us at the Dartford Toll on the way over? I decided not to mention that to the van hire guy (no marks, fortunately, it was just a tap). As we screeched our way through the mud into the camper van area and then crashed (in the going to sleep sense), I already had plenty of adrenaline pumping. Here’s how it went down:

Thursday: If you can’t understand the need to arrive at Glastonbury on a Thursday, you’ve never been. At least one day of exploration is required before any major-name band steps onto a stage, as there’s simply too much to see in amongst all the music. We met up with some old friends, hung around the stone circle and cheered the sunset (that’s not insane behaviour at Glastonbury, so there!), and uncovered the stone dragon in amongst the stone circle trees. We walked through the arenas, dug out some amazing snacks from the stalls, and sat by the van for hours chatting away to our slightly nutty neighbour. All part of the Glastonbury spirit. In amongst the scattered fields there’s so much weird and wonderfulness to uncover. We found a strange pile of pillars that you stroll through and they make bird sounds. In the circus fields, there were insect circus caravans, comedians, wombles, hippie bongo drummers and a woman doing an extremely strange take on X Factor involving making rhythmless men dance (no I didn’t give it a go…). There were even four men with suits on their top halves and red shorts on the bottom performing some very impressive yet comically adapted versions of Vivaldi’s four seasons. Very short versions. 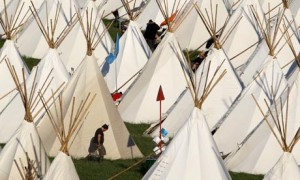 The best side of Glastonbury outside of the live performances for me, though, is probably the nightlife, and why not kick off early on the Thursday. The Shangri La end of the site has absolutely everything weird and wonderful. We went clubbing in an 80s style disco night that involved wearing fake moustaches to even get in the door, and walked around an area where one club featured a train crashing into a building, and other areas just shone with glimmering neon. Just three minutes away, over the old railway line, was Shangri La itself. It’s grown so much since I was last at Glastonbury. The entire area had a viral theme, with lasers shooting all over the place, sky walkways taking you to hidden bars and DJs performing in the carcasses of crashed planes. There were creepy little holes in walls with actors performing terrifying skits and the whole thing just seemed more surreal in the pouring rain and thick, gloopy mud. That end of Glastonbury just feels like another planet, and it’s one I could learn to live in. Though it is pretty intimidating, especially after a few beers.

Friday: So the music begins. Sure, first you have to shake a stonking hangover from a night of lost madness, but Glastonbury doesn’t allow for time wasting. The main reason I always come back so completely destroyed is that there’s just too much going on to ever feel like you can go to sleep.

There’s an obvious stand out there: Radiohead’s unannounced show on The Park stage was the worst kept ‘secret’ in Glastonbury’s impressive secret gig history, but it was still incredible. People were piled right up the hill before they walked on stage, and while the affect was somewhat ruined by a dodgy sound set up, we did manage to get far enough forward to hear the completely off-the-wall set the Oxford lads came out with. I’ve seen them play the classics a few times, so lots of Kid A and new stuff was ideal. I owe Ant a beer next time I see him for tipping me off. U2 were a great sing-a-long but Bono’s voice came across pretty weak, disappointingly. He also insisted on connecting to somebody on a space station and then spent more time rambling himself then actually allowing the astronaut to speak during ‘Beautiful Day’, and performing ‘Jerusalem’ before ‘Where The Street Have No Name’, which – whether Jerusalem is related to Glastonbury or not – is one huge and obvious contradiction. Still, I’m glad I’ve seen them live once in my life. Aside from Radiohead, a mad hip-hop band in The Glade and the closing laser-strewn beats of Asian Dub Foundation made for a mad night. Still, the musical highlights were definitely still to come. 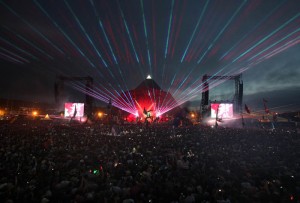 Wow, I love the John Peel Stage. It’s grown a lot since ‘05, and it’s just absolutely crammed full of some of the best new acts you can hope to see. Irish lunatics in morph suits Fights Like Apes kicked up an absolute storm. Anna Calvi played some incredibly touching stuff on guitar with a furious face on her throughout, and Belfast band Not Squares got a bit of our local support in amongst the slightly bizarre ‘cubehenge’ area. There was also a mini wellyhenge – awesome. Stornoway are a lyrically intelligent folk band I’ve come to absolutely love – we got up early to watch them on the Main Stage and then stumbled on them again in the BBC Introducing Stage playing a guest slot, and both were incredible. Then there was Pulp as that second ‘secret’ guest on The Park, performing all the hits. ‘Babies’, ‘Sorted for E’s And Wizz’, ‘Common People’, ‘Mishapes’… definitely one of my top five bands of all time, and once again only let down by the sound on that particular stage being unable to deal with the huge audience. After that, we were wrecked. Probably the pear cider – the stuff is just incredible. They’ve even expanded the range since I was last at Glastonbury, adding flavours like lemon and toffee apple (much better than it sounds).But yes, I had an early night at Glastonbury, I regret it slightly, but by the time Coldplay were done it had been a long day in the mud with plenty of mayhem. And the camper van is damn comfortable. 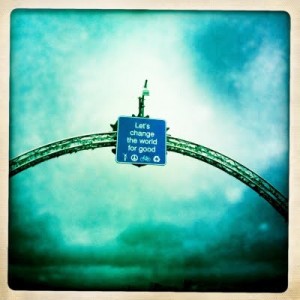 There’s always a hint of sadness come Sunday. I find leaving Glastonbury difficult at the best of times. When I strolled out in 2005 I had no idea it would be six years before I came back, but come the early hours of Monday morning, when we just about persuaded the camper van to start up and transport us back for a much needed shower, I knew for a fact that I wouldn’t be back until at least 2013. Damn fallow year. We allowed 11 hours to get back to Southend, drop off the camper van and then travel to Gatwick, and still only made it by perhaps ten minutes. Anyway, Sunday was the day of the headline dilemma. I’ve never been – and never will be – much of a Beyonce fan, so I only watched perhaps three songs of her. She started with three big ones, and that was more than enough to convince me I wasn’t interested. Then there was The Streets, on their last ever tour, but it turned out the sound was very iffy at the back, so I ended up watching an absolutely manic set from Queens of the Stone Age. The best part of Glastonbury is always the randomness, though. Dan Le Sac Vs. Scroobius Pip and The Joy Formidable were both incredible, but stumbling upon a hippy band called Seize The Day performing in one of the green field areas tiny little tea tents was a huge highlight. I love that Glastonbury still has such a diverse age range (not true of any festival I’ve come across, yet, with the marginal exception of Vantastival, which is a touch too under populated to really count). Seize The Day had grandmothers up on the dance floor, dreadlocks flying. Their songs are about all sorts, but the best is a track about the lead singer’s part in the destruction of a bomber lined up to attack Indonesia. A real Glastonbury moment. Don McLean doing American Pie wasn’t bad, either.

So I’ve rambled on about Glastonbury more than enough, but I could write a book and not cover all the tiny corners that make it so special. On top of that, every band seems to play the set of their lives; there’s no arguing that they all absolutely love it, and that makes for an incredible weekend of music. Here’s to two years of watching it on television and wishing any other festival could even get close. The same as the last six years, then!