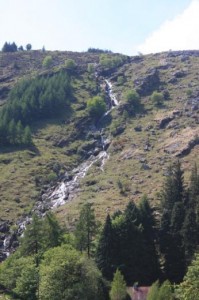 Wicklow, being just down the road from Dublin and easily accessible on a day trip, is one of those places that I just don’t take advantage of enough over here. It’s a heavily rural, hilly area with loads of opportunities to hike, bike and camp. I hope to be seeing a lot more of it, but this particular trip was just for the day, and the start of something Sean and I have been talking over – but not getting round to doing – for some time.

We’re planning to take a few weekends over the coming months to climb the tallest peaks in each of Ireland’s four districts, and starting just down the road from Dublin with the second highest, Lugnaquilla, made sense as the first one. At just over 950 metres – most of which you have to climb to get to the top, as you start only a little above sea level – Lugnaquilla is only the 14th highest peak in Ireland, but still higher than all the peaks in Ulster and Connacht. In other words, we’re going to be in for a real mission when we finally get to Munster, which we plan to save as the last peak, perhaps with a bottle of champagne to enjoy along the way…

We chose a perfect day for climbing Lugnaquilla, but not the perfect route. You start from a tiny village at the end of a cul de sac trail about an hour and a half from Dublin, and the first part of the climb is up to a glen at the top of a 200 metre (upwards) zig zag, plenty to test the legs early on. Having only read the route off the Internet before we left, we took a major wrong turn at the top, and found ourselves climbing in the blistering sunshine up a route that was infinitely more difficult than the route we came back down.

After walking along the glen we found ourselves staring up at what we thought was the peak, but to get there we had to scramble over hundreds of metres of thick bushes, over an hour of intense hiking (it was like walking through treacle) before we reached the ‘peak’. Of course, it turned out not to be the top – a whole lot of Irish peaks seem to run on much higher behind what you can see as you climb, and you’re never completely sure where the top is until you actually get there. The rest of the climb, fortunately, was pretty simple: along a load of empty, relatively flat fields and ending overlooking some of the craggy peaks that seemed like the highest points early on. We stood on the triangulation point and took photos flowing in the wind, before walking down in about a third of the time it took to get up, and arriving back in Dublin just in time for some take out and the champions league final.

Next up – though it’ll probably be a month or two away – is Ulster’s peak, which we’re hoping to combine with a weekend camping by the coast eating BBQ and swimming in the sea.