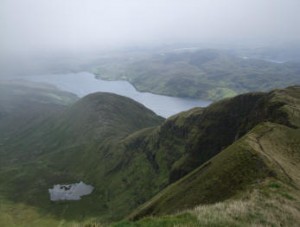 Ah Mweelrea, you will be the death of me. Having made it fairly comfortably to well over 5000 metres in the Nepalese Himalayas, being stumped for the second time by Connacht’s highest ‘mountain’ (814m) is more than a touch frustrating. It just seems to conspire against us. Last time Sean and I got stuck in the swamp, but still made it within a few vertical metres of the peak in severe fog, only to find that we had no idea where to go to actually get to the top in visability of only a few feet. We just had to wade our way back again. This time the weather assault on offer was even worse.

On the plus side, we found a much easier way up: a short hop from the car park, followed by a hike into a higher valley. We then veered to the right along the ridgeline, where there are some incredible views across a pretty severe selection of surrounding peaks. From the ridgeline, it’s a fairly simple assent on paper: perhaps around 50 metres vertically to get to the summit, but at least 500 metres around the ridge. For us, though, that was the end of it. 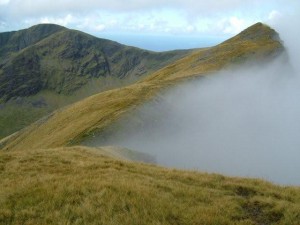 Perhaps just climbing reasonably big hills in February is stupid, but I’ve genuinely never come across wind like what we uncovered as soon as we hit the ridge. It was so violent that our backpack started acting as a parachute, dragging us about the place, and the only way to communicate at all was the scream at each other from a distance of no more than a foot. A little bit of rain became a severe weapon, we both got faces pinker than after a week lying on a Spanish beach. The safest way to move became to either crawl, or lean dangerously down the hillside and into the wind. I won’t hazard a guess at the wind speed, aside from to say that had we attempted to go along the ridge line, the chances of losing ourselves or our bag over the extremely severe slopes were quite impressively high. So, after enduring ten minutes of facial abuse, down we went.

With the new (better) route, it wasn’t even all that difficult. Just infuriating, given the wind on the way up was nothing more than a gentle shove up the mountain, and we strolled back in to Galway with barely an ache between us. Still, there’s always next time. And given that we’ve always talked about saving the biggest hill – in Munster – until last, Mweelrea’s probably up again before too long. Perhaps with a weather forecast check this time! 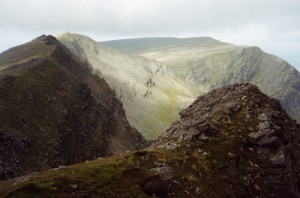 As an aside, spending time in this area of Ireland is quite an eye opener. The base of a lot of hills are marked with stone walls stretching up at angles that seem impossible to farm, crumbling to the ground. These are Insignificant in themselves, but a pointer towards Ireland’s pre-famine population (two million more than it is even now), and how sought after land once was. It’s all been abandoned back to nature now, though no doubt rural-urban migration has also played a role. I’ve never been much of a nationalist, but stuff like this does nothing for your sense of worth as a Brit, though it does add to the rustic beauty of the extremely rugged west coast countryside.

Anyway: one day, Mweelrea, I will defeat you. When I do, I don’t want to see you again for some time!