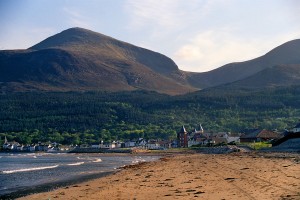 Tip number one, intrepid ‘mountain’ climbers: don’t try and climb one of the country’s highest peaks the night after a major drinking session. Even if that country is Ireland, and a ‘major peak’ is still someway short of, say, Nepal’s capital city. At around 3am, Sean, Helena and I were heading home after successfully strolling (not entirely intentionally, honest) past the slightly dopey bouncers on the door of Kennedy’s without paying to watch dubstep DJ superstar Ramadanman. Whose name I challenge you to repeat very fast ten times. Come 10am, Sean and I were jumping in the car and heading north of the border, hoping to get up and down Ulster’s highest peak ‘Slieve Donard’ before the sun dropped below the horizon. Was Ramdanman worth it? After that much whiskey, I’m not sure, though Radiohead certainly thing so – they blogged one of his remixes a couple of days ago.

Slieve Donard is the shortest of the four peaks we’re working our way round, though the starting point is no more than a few meters above sea level. In fact, the car park is overhanging the Irish Sea, which makes 852 metres seem higher than it actually is. Still, given that we couldn’t actually see the peak from the road, the first thing to do was to trek into the heart of the valley, get in amongst the Mourne Mountains and work out the quickest way up. It turns out the quickest way up is actually to follow a wall built all the way to the peak, but we didn’t know that at the time. Instead, we followed a stream until it was narrow enough to cross, and then went directly up. 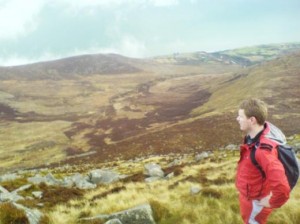 It’s somewhat disheartening to get to the top of a fairly severe slope and find a man, his wife and his dog casually strolling up from the other direction. Still, doing things the hard way is just that little bit more interesting. The final ‘ascent’, if it can reasonably be called that, was at a pretty severe angle and involved a lot of scrambling. It also involved me opening up a cut on the same finger that I smashed against a fan here (image not for the faint hearted) on a rock, which has made typing a little difficult since, but it seems to have healed now.

As always, the descent was a whole lot easier than the ascent. Round three is booked for the coming weekend – a second attempt on Mweelrea in Connacht. Hopefully we’ll avoid the swamp, the cliff edge and the fog this time. Until then, here’s a few sporadic highlights of a day in Northern Ireland: 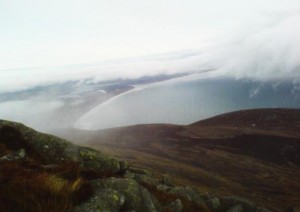 Things I learnt from a quick trip north of the border:

– Newcastle – and the minimal other parts of Northern Ireland we strolled through on the way to the mountain – feels like neither the Republic or the UK. The town itself is tiny and has two open-air swimming pools along the coastline, bizarrely, while the elderly ladies in some of the convenience stores sell out of date sandwiches and have absolutely no idea how to operate a chip and pin machine. Looks like a nice holiday sun spot, though.

– Walking up a hill in shorts is a great idea, until you learn that said mountain is one of the most gorse-ridden things on the entire planet. Crawling through small holes of gorse = not so much fun. Argh.

– Newry on Sunday morning is a ghost town. There was literally not one person walking any of the streets we drove down. We thought about stopping for food, and then decided we’d rather go somewhere a little less oddly empty. There were plenty of cars; perhaps people are just really lazy in Newry?

– Pictures from a camera phone do a really good job of making everything look extremely gloomy – see attached.