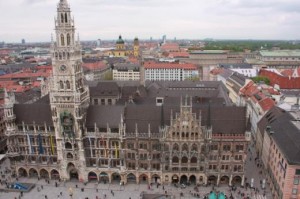 I’ve always wanted to go on tour with a rock band. There’s an obvious appeal: backstage shenanigans, rock and roll excess and a whole lot of live music. Live music, of course, is an obsession of mine that shows no signs of slowing up. Thankfully, I managed to dodge volcano themed mayhem (though the band very much failed to do the same, having their flight cancelled in both directions) and make the most of the experience.

The original plan revolved around Munich-based band Flea Market Poets, whose guitarist kindly lent me the use of his floor for the weekend. He’s a really interesting guy, incredibly friendly and with an fascinating take on the Internet, which he sees as something of a Big Brother thing. His name doesn’t feature anywhere online; instead he uses the pseudonym ‘Hazel X’, which also features on the band’s album cover. Of course, I’m going to respect that and not put his real name up here, but I do want to say thanks to him, he was a fantastic host.

I met up with ‘Hazel’ in the Hofbrauhaus, which I’d stumbled along to on the Thursday night with Identity Parade (a Dublin band who came out to support Flea Market Poets). The Hofbrauhaus is infamous for its ‘mas’ quantities of beer, which is not only served in volumes of a litre at a time, but is also 7% alcohol. Which means that drinking one is the same as drinking three shots of pure alcohol or about 6 vodkas. It doesn’t exactly make for a quiet night, but we still managed a couple of them with a freshly cooked Bratwurst before heading on to a late club. The hofbrauhaus still has the markings of the early Nazi meetings (including a giant swastika) and is stuffed to the brim with lederhosen-clad locals and knee-slapping music. Making the most of Munich nightlife became a theme for the weekend – I rarely got in before about 3 or 4am, and seeing the city suffered a little for it, though spending time with tour musicians doesn’t give you a whole lot of choice. I’m pretty sure that the boys from Identity Parade didn’t see much more than the very heart of the city and the inside of their hotel rooms. 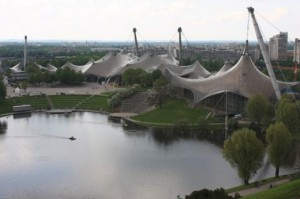 The next day, though, I was determined to actually see some of Munich. I always look forward to the German bakereis (why someone doesn’t spread them throughout Germany is beyond me, they’re incredible), and after stocking up on pretzels and pizza like things made from pretzels (genius combination), I spent some time walking around Marien Platz, climbing to the top of a nearby tower to look out over the city and walking over to some of the old Palace buildings to the North. Munich’s impressively regal, and despite the wide open spaces around the squares feels a touch claustrophobic to me. I think it’s the tall buildings down every major street – six or seven stories that seem to hover over you even on a wider road.

The second evening was Identity Parade’s chance to shine. Despite this being their first trip to Germany they were given a headline slot at a charity gig, and I caught up with them having a few beers backstage before the show. The night before I’d called it a night about 3am and headed back with my hosts, but several of the lads had stayed up until 6, and then jumped out of bed the next morning just in time for their mid-afternoon interview with a local magazine. Apparently they asked for somewhere to carry on after the club closed, and ended up in a gay bar. Which is all very well, but they’re all straight, and several of them were propositioned in the bathroom. They went back the next day, of course.

I’ve never seen Identity Parade live before, but they really stormed it. they play a brand of mod rock that’s lively and varied, and had support from three extremely odd guys in pilots uniforms and a great German band who were clearly very heavily influenced by Bloc Party. The night finished on a high with a trip to Munich’s most popular chipper, apparently the only place that can actually make chips properly in the entire city. 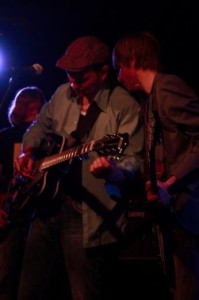 The next day was Flea Market Poet’s turn, and we turned up early enough to watch sound check and get stuck in to the beer back stage. Identity Parade opened to no more than about 50 people, but Flea Market Poets have built up a real local following, and the club was packed with upwards of 500 when they came on stage. Despite all kinds of vocal issues early on, they played a really lively set, and I got my favorite of their songs – Captain Nate – dedicated to me for ‘coming all the way from Ireland’ (thanks Hazel). I felt more like I owed the band than vice versa to be honest – putting me up for four nights in Munich is hardly a small ask, and they were lovely throughout. I hope the small amount of publicity that my articles on the experience have will do them some good. That night turned into a 6am one; I caught the early morning subway home with the boys from Identity Parade after staying until the club lights turned on. Strangely (for Munich) the club side of the evening was called ‘Factory’ and dedicated to the Manchester record label.

Those boys like to live the rock and roll excesses, especially when the playing’s done. Backstage they were happily throwing back their rider in double quick time, experimenting with the strange liquid filled orange sweets they’d been given and freaking out the club staff by riding up and down in the tiny freight elevator (really cramped) and jumping out amongst the sleeping staff backstage.

The weekend was basically one long party, but aside from wondering the city centre, I did get out to the old Olympic Park and a nearby castle, too. I thought about trying to get out to Dachau to see the concentration camp, but at the end of the day it seemed at odds with the vibe of the trip, and by the time I got up most mornings it wasn’t really realistic. Next time. Nymphenberg Schloss was a huge baroque building, more like an old house than a castle with lots of royal-ish gardens full of flowers and a big botanic garden next door. I walked along the canals to the Olympic Park, which dates back to the 80s but looks far more modern. It’ll be great to see stuff like that in London in a few years – I’m going to have to start hassling friends for floor space for that!

All in all I loved Munich, though I felt like I saw precious little of it with all the music and late nights. I did get to polish things off on Sunday with a great day celebrating Bayern Munich’s Bundasliga win, with thousands of people filling the main square while the players walked around with the trophy. I bought myself a pizza and sat at the edge of the square to watch it all unfold.

If Munich’s that messy on a normal weekend, who knows what it’s like during Oktoberfest…

(Thanks to ‘Hazel’ for putting me up, Triona for organizing everything and Identity Parade for all but forcing me to drink their beer and party all night long. You’re all legends, and I can’t wait for Flea Market Poets to tour Ireland in July.)