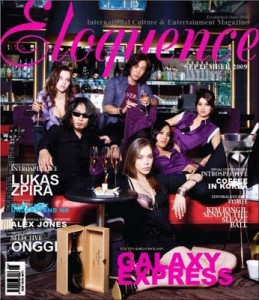 I received an email the other day from Julian Kong, the editor of Eloquence Magazine in South Korea, to let me know that we should stop work on all articles. The magazine is being shut down by the funders. If you follow the world of modern media, you’ll know that this isn’t exactly a rarity: print media is a slowly dying breed, and while I find it hard to foresee a time when you can’t walk into a newsagent and buy newspapers and magazines, a whole load of investors are having second thoughts about the public’s reluctance to pay for content that you can get for free on the internet. The selection is certainly on a downhill trend. Of course, there’s only so long that writers – especially good ones – are going to write content for the internet at a good standard before the reliability and competence of the authors becomes a problem (let’s face it, no one can work for nothing), but that’s a story for another day. Perhaps advertising will reach a level to cover the costs.

Anyhow, I feel it’s important that I take a moment to pass on my sympathies to Julian and the rest of the team. I can’t think of a single person who’s been more influential in my progress in the world of journalism so far than Julian. He took a chance on me as a completely unpublished author back when he was running Rokon, and it turned out he not only believed in me, but had enough faith in my ‘cheeky British style’ to push me to my limits. I think there was one month back there in Seoul when I wrote more than half of the magazine. I remember well having to come up with some imaginative pseudonym so it didn’t look too ridiculous. Julian also put me face to face with the likes of Pendulum, Brand New Heavies and Simian Mobile Disco, and even had the balls to publish my ranting article about 50 Cent’s anti-homosexual stance, an article we still think played a part in the cancellation of the bigoted rapper’s Korean date. Though perhaps that’s just insane optimism. 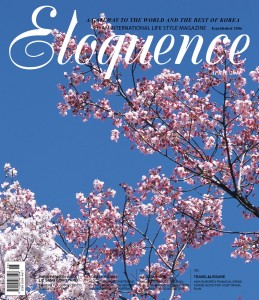 When Rokon died, Julian took a few of the team, myself included, on a brief sojourn into a national Korean magazine called ‘Bling’, which is available in pretty much every coffee shop in Korea. That got me into music writing in a big way, and also helped me get a position with the Seoul Government as a tourism writer, and eventually led to a few substantial contributions to Lonely Planet Seoul’s latest addition. Then Julian took over Eloquence, a reasonably well established expat magazine, and turned it into a national powerhouse for English media in Korea. We launched a column called ‘Vomit’, one issue of which you can read elsewhere on this website, with the aim of bringing something a bit more controversial into the conservative East Asian media world. It was a lovely excuse to rant. I was also listed as an editor of Eloquence until very recently, solely because I was able to dig out the odd story over in Europe to pad out their glossy pages. It truly was a beautiful magazine, and the chance to interview and write about the experiences of a defector from North Korea to South Korea was certainly one of the highlights of my travel writing efforts to date.

What I’m fairly sure Julian doesn’t know, though, is the other role Eloquence once played in my life. There’s no doubt that I would have continued to work for Eloquence indefinitely regardless of the emotional connection I have to the magazine, simply out of loyalty to Julian. When I was growing up, I had a teenage love affair with a band called [Spunge] (yep, with the brackets and bad spelling – I don’t know either), and in the song Roots they sang “You shouldn’t take it for granted the roots that you planted will be fine. You should make it a mission to go back and check from time to time”. I hope to visit Julian in the next year or so back in Korea, and I hope he knows that whatever the next journalistic endeavour he’s involved in is, I hope to be right there at the front of it alongside him. 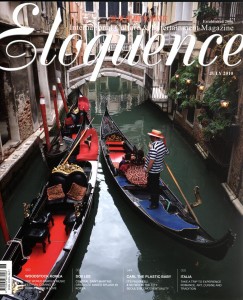 The reason I feel Eloquence had a particularly key role in my life, though, is this. When I first arrived as an expat in Korea, Eloquence articles and adverts were one of the primary sources of what was going on in Seoul. At the time it was an extremely amateur publication, and not the glossy piece of fashionable beauty it is now (see pics), but it was full of lots of ideas for newcomers on things to do. One of those was cultural education at a Buddhist Temple called the Anguk Zen Centre. I learnt about the centre through one of those Eloquence adverts, and went along one weekend, perhaps a month after arriving in Korea. I met Helena, who’s now my wife. If it hadn’t been for Eloquence there’s a very good chance my life would have taken a very different path.

I’m gutted to have to say goodbye to a publication that meant so much. I still have a stack of the last 18 months’ worth of glossy Eloquence Magazines piled in our bedroom, and I have a written contribution in almost every one. Best of all, every time I received a copy, it reminded me both of Julian, who I’d still consider one of my best friends, despite the fact we haven’t seen each other for about three years, and of how I met my new wife. It won’t be the same without that monthly piece of quirky, glossy genius falling through my letter box once a month.

Best of luck in whatever you do, Julian. Knowing you it’ll be truly spectacular.

Eloquence Magazine, strange as it might seem, I’ll never forget you.