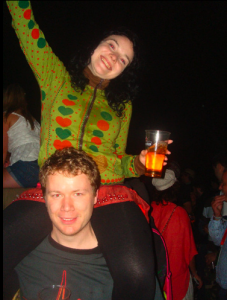 Ever since I’ve come to Ireland and got involved in the local music scene, I’ve heard a lot about Electric Picnic. Despite being (I think) only seven years old, it seems to be one of those festivals that’s made itself part of the local music culture, much like an Irish Glastonbury, known for it’s good atmosphere and the effort that goes into making it something more than just dozens of bands in a field.

On Friday, I finally got to see what all the fuss is about, and it didn’t disappoint. I must admit I’d spent a large part of the past year telling people everytime The Picnic came into conversation that it wouldn’t match up to Glastonbury, and, well, it didn’t, but it came a good bit closer than I expected. 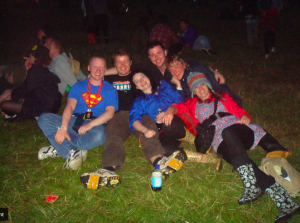 The best sides were in the little details. The Picnic equivalent of those endless fields of random ‘green’ ideas, little tea tents and off-the-wall art at Glastonbury is the Body and Soul area. Some of the things inside were truly impressive; aside from a host of tiny tents featuring unannounced musicians and ornate decor, there was a hot tub area (I’ve never seen hot tubs at a festival before, they were made to look like Alice in Wonderland style tea cups and made me wish I’d bought swimming gear), saunas and a host of ethnic food stores. I was particularly taken with the Indian stuff; just walking past some of the stalls gave that beautiful scent of spices that I’ve never experienced in full outside of India (where, to be fair, it’s usually mixed with a strong smell of cow… erm, products). I drank far too much chai for my own good, and – if it wasn’t for festival prices – could probably have stuck my nose into a good load of curries and falafel as well. In the main arena, there were even ostrich burgers. 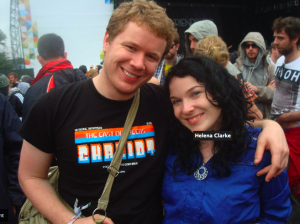 Then there was the artistic side. Now, to say I’m a man who doesn’t go out of my way for art of the visual kind is probably quite an understatement (though I have been known to drop in on the real ‘must see’ things), but I am a big fan of the oversized stuff that turns up at festivals, if only because it really, really adds to the vibe. Some of the best pieces at Electric Picnic were things like spinning color wheels turned into a huge kaleidoscope (positively vomit-inducing on a Sunday morning), the gold ‘direct line to God’ in the main arena and the impressive assortment of wicker men stood around the bonfire or hovering over the smaller stages.

The political side wasn’t at all shabby, either, though I did manage to miss the ever-vocal George Galloway no doubt going off on a major rant in the ‘Mindfield’ area. I did catch the on-the-spot science, which included Dublin’s musical science exhibition displaying things like how to pass radio waves through the body, as well as a few fiery and highly entertaining questions for Joy Division’s Peter Hook. 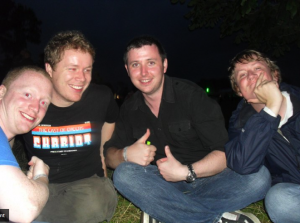 For me, though, the best side of Electric Picnic had to be the people. Having firmly established that Ireland’s other major festival – Oxegen – is more responsible for teaching an entire generation of kids how to mis-spell one of the world’s most important elements and spend time extremely aggravated with each other than spreading any love, Electric Picnic showed the other side of things. To give an idea of the friendliness, one person we were camped with lost her phone, and the person who found it called around her friends and gave it back. She then lost it again, but hey, you can’t have everything…

It’s not my favorite festival, not quite. I still thing Glastonbury’s sheer scale; the feeling that you could never see everything even if you wanted to, and the incredibly variety of music on offer trumps Electric Picnic (and every other festival I’ve ever been to) quite comfortably. Having said that, I can see what all the fuss is about. I’ll certainly be going again.

Here’s to jelly shots, late night renditions of Tom Jones, the ‘Picnic family’ and heading back next year. After Glastonbury, of course.